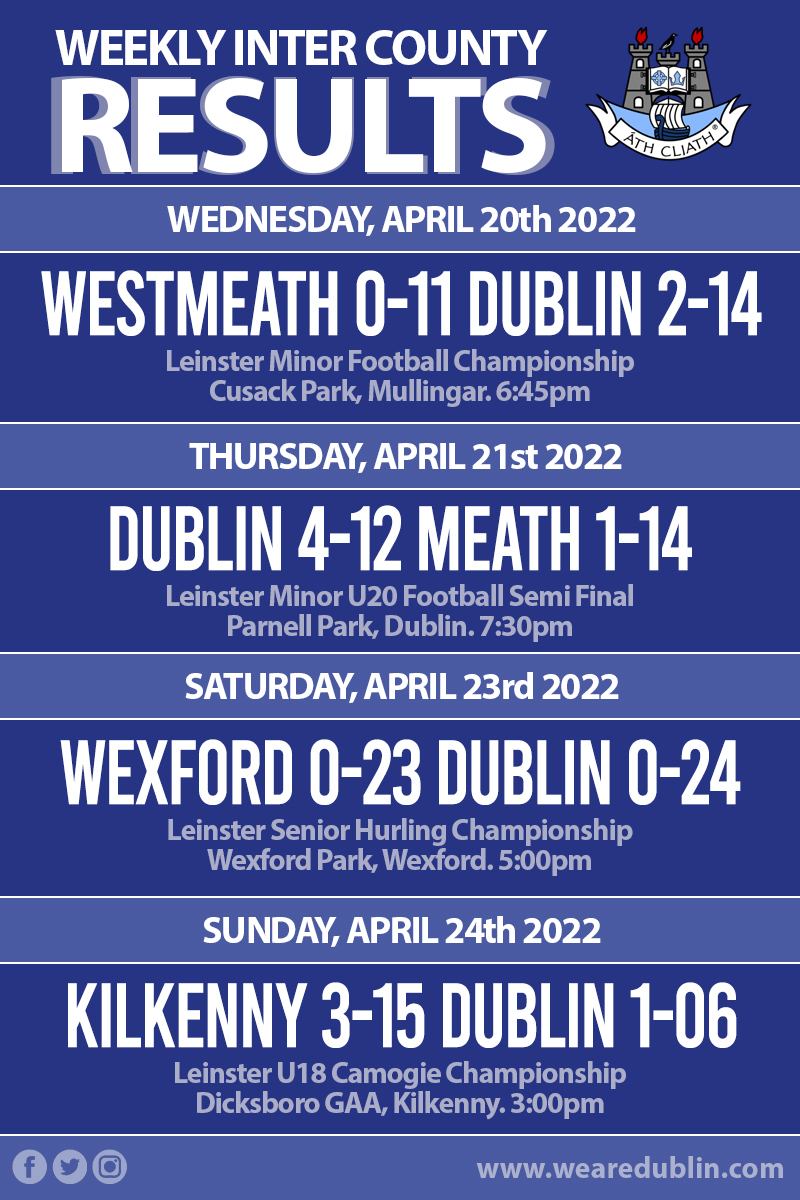 Another busy week has come to an end, and it’s been a busy. We’ve plenty of results to get through with only one loss over four inter county games. Here’s all the details you need.

Dublin’s Minor Football panel made it three form three in this year’s Leinster Championship on Wednesday night with a 2-14 to 0-11 victory over Westmeath.

This win was preceded by their two wins to date, a 5-14 to 1-01 win over Louth and their 2-15 to 0-04 victory Laois. What that means is the Dubs advance straight to the competition’s Semi Final stage, avoiding a Quarter Final.

Dublin held a slim 0-08 to 0-06 lead over their opponents at half time in Mullingar on Wednesday, but pushed on in the second half to shoot 2-06 to Westmeath’s 0-05.

Goals from Ryan O’Dwyer, Adam Waddick and Luke Breathnach spearheaded a superb performance from Dublin’s U20 Footballers on Thursday night, booking their slot in this year’s Leinster Final. They’ll face Kildare on Thursday in Portlaoise in the hop of regaining the provincial crown they lost to Offaly last year.

Dublin were 3-07 to 0-04 to the good by half time in the game, with the afformentioned trio rasing green flags. That was enough to build a healthy lead and drop a gear on the restart. Meath to their credit mounted a comeback challenge in the second half but that first half lead, combined with another Breathnach goal saw Dublin comfortably over line.

Thursday will be Dublin’s ninth consecutive Leinster U20 Final appearance, and they’ll be up for teh challenge of Kildare.

It’s two for two results for Mattie Kenny’s Senior Hurlers in Leinster as they came away from Chadwicks Wexford Park last night with a victory. Guided once again by an amazing Donal Burke performance, Dublin have put themselves in a great position in the Round Robin phase of the competition.

At half time the Dubs were 0-13 to 0-09 ahead, and knowing they’d get pressured by the home side they kept the momentum up. Going into the closing stages of the game they held a 0-24 to 0-20 lead. Lee Chin helped Wexford close that gap but Dublin, inspired by full back Eoghan O’Donnell held on for the win.

Next up for Dublin is a trip to Westmeath in Round 3.

A disappointing end of the season for John O’Connell and the Dublin Minor Camogie Panel as they came up short this afternoon at Dicksboro GAA Club, losing to a more polished Kilkenny side, who were crowned this year’s Leinster U18 Champions.

Despite trailing Kilkenny for the majority of the game, credit must go to Dublin for refusing to quit for over an hour of Camogie. But Kilkenny were more than deserving of their win in this decider.

On 25 minutes, Dublin were 2-07 to 0-03 adrift before Sinead Daly found the net to narrow the gap to 7 points. But it was an eight point defecit by the break.

Kilkenny continued to mount the pressure on the restart. Dublin struggled to gain any momentum and only managed to register 0-02 over the half hour to Kilkenny’s 1-06. But the girls in blue can be proud of their achievements this season.

That’s all the results for this week. Stay tuned throughout this week for more news and fixture details.