A busy week of action across codes and grades, so here’s all the weekly Inter County results form Tuesday to today 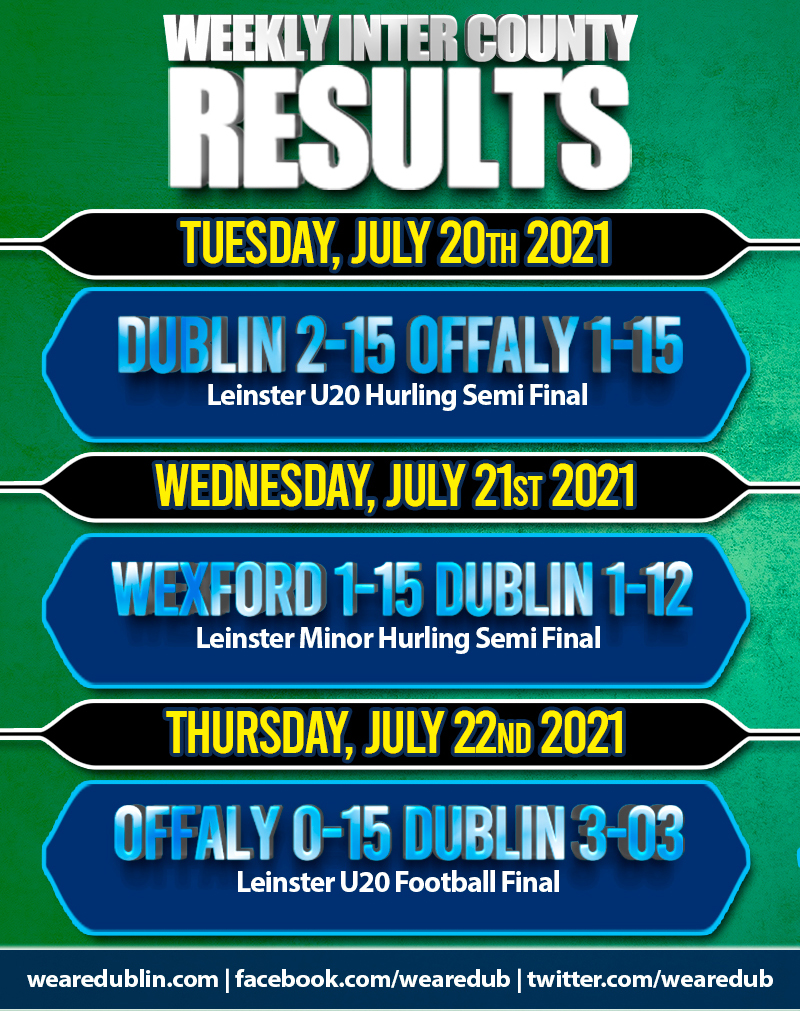 It’s been quite a while since we’ve pulled so many results together in a week. But as there were so many games since Tuesday it felt like the right time to put them all in one place. Between Minor and U20 Football and Hurling action, and Minor, Intermediate and Senior Camogie action, we’ve been flat out. So here’s everything you need to catch up on the Inter County week.

The Dublin U20 panel set up a Leinster Final date with Galway after seeing off a tough challenge with Offaly on Tuesday night in Parnell Park. Dublin had dominated most of the action on the night and were eight points clear at the second half water break. But a late surge from Offaly saw them close the gap to a point.

But the Dubs held on with substitute Cian Boyle and Ciaran Foley leaving it a three point game late in additional time. So Dublin get to defend their Leinster crown, one they only won a few weeks ago due to the COVID restrictions and game cancellations.

Sadly the fortunes of the Minor Hurlers were not as good as their U20 colleagues as they exited the Leinster Championship on Wednesday night losing to Wexford by three points.

A strong third quarter saw Wexford outscore the Dubs by 0-05 to 0-02, and they held that advantage going down the home straight to set up a Leinster Minor decider with Kilkenny next week.

Wexford had moved 0-05 clear with minutes to go, and despite two scores from Dennis McSweeney Dublin couldn’t close the gap any further, as the vital goal just didn’t come.

The dream of three Leinster U20 titles in a row for Dublin were smashed by Offaly on Thursday night in Portlaoise. Offaly were outsiders to win the provincial title, but you wouldn’t have known it to look at them.

Jack Bryant starred for the Faithful county, and he began the fight for his side with the teams level at the second half water break.

Morgan Tynan and Cormac Egan registered scores, while the Offaly defence put a stop to any effort Dublin attepted to claw the defecit back. And the game slipped from Dublin’s grasp as new Leinster Champions were crowned. 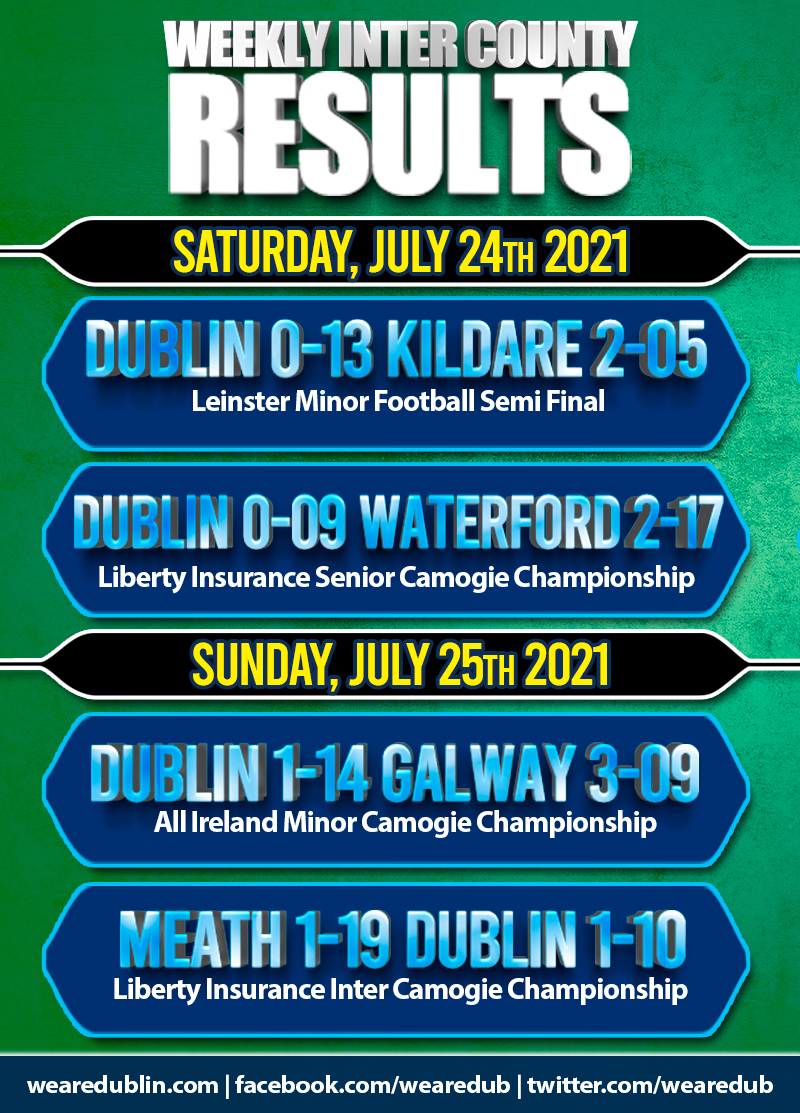 Ger Lyon’s Dublin Minor Football Panel toughed it out yesterday afternoon at Parnell Park. And despite a late charge from Kildare in the final 10 minutes, it was Dublin who ran out winners, setting up Leinster Final date with Meath next week.

Tadgh Gorman lead the charge for Dublin scoring 0-05 of their 0-13 total. But it was a massive effort all round, with some quality defensive work that got the Dubs over the line.

Dublin led for the majority of the game, with the sides level only three times. A 52nd minute goal from forward Elliot Beirne sprung Kildare into life. Gavin Thomspon registered three points in succession to give his side a one point lead before Ronan Geoghegan levelled the sides again.

Another Gorman point and a converted mark from substitute Karl Flynn was enough to give Dublin a 0-02 lead and hold out to qualify for the Leinster Final.

The dream of Dublin’s Senior Camogie panel advancing to the knockout stages of this year’s All Ireland Championship ended yesterday. Adrian O’Sullivan’s panel suffered a heavy defeat to Waterford, in a game of no comparison to their League relegation battle last month.

Despite a bright start from Dublin, taking an early three point lead, Waterford grabbed the game by the scruff and dominated the proceedings. Beth Carton, Niamh Rockett and Abby Flynn led the charge in a 14 point victory for the Deise. Dublin now need to grab a last win against Down next weekend to avoid a relegation battle.

After over a years absence the All Ireland Minor Camogie Championship got back up and running this afternoon. And in an incredibly enthralling contest, Galway snuck a win over Dublin in Round 1.

Dublin were three points in front on a 1-09 to 2-03 scoreline at half-time, but Galway came out fighting in the second half. And despite Dublin outscoring Galway over the 60 plus minutes, goals win games, and Galway’s three were the difference as they held on for a one point victory.

Dublin take a bye week, next week and travel to Tipperary the following week for a must win game to qualify for the knockout stages.

Dave Dunning’s Intermediate Camogie Panel suffered a nine point defeat at the hands of Meath in their opening All Ireland fixture.

Meath led from the start, taking a 1-04 to 0-01 advantage into the first half water break. And they made it a seven point deficit at the break with the scoreline at half-time 1-10 to 1-03.

Dublin were 0-10 down by the second half water break and only got within nine points of the home side with Meath finishing comfortably winners by 1-19 to 1-10.

The Dubs face Galway next weekend at home and will be hoping to bounce back from today’s defeat.

Join us next week, where we’ll have more Inter County action in Leinster Hurling, and All Ireland Ladies Football and Camogie.