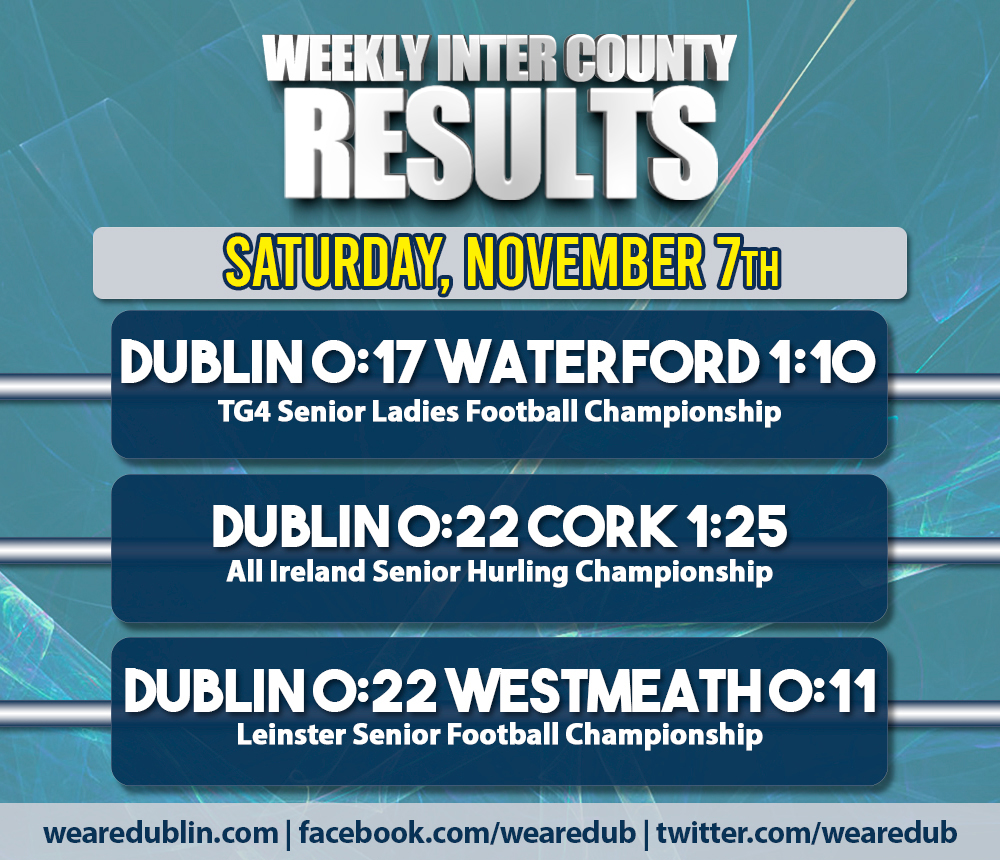 It’s crazy to think that after waiting so long this year for the action to begin again, we have only six possible fixtures left to look forward. We’ve already lost our Senior Camogie Panel in All Ireland action. And yesterday our Senior Hurlers bowed out of their Championship race. It leaves our two Senior Football Panel to carry the torch for a forgettable 2020. But that still means we could be re-writing the history books once again. Here’s all the details from yesterday’s Inter County Results.

Three in a row All Ireland Champions Dublin became the first team to advance to the Semi Finals of this year’s TG4 Senior Ladies Football Championship after their 0-17 to 1-10 win over Waterford in Baltinglass yesterday afternooon.

The result followed their opening round win over Donegal in Cavan last weekend. And that makes it two for two in the rounds. They now await Mayo or Armagh who square off to decide the Semi Final pairing.

Waterford posed some stiff competition for the reigning champions. Half way through yesterday second half they found the net leaving one score between the sides. But it was Dublin’s experience in the big games that saw them through.

After two stellar performances against Laois and Kilkenny in Leinster, the road ran out for Mattie Kenny and his Dublin Senior Hurling Panel yesterday, as Cork sent them out of this year’s All Ireland Championship at the first hurdle.

There was no epic comeback yesterday like last week’s against Kilkenny that almost got them a Leinster decider. Cork recovered emphatically from their loss to Waterford last weekend to take the game to Dublin. And the competition was all but over at half time.

Credit to Dublin who tried their best to press, Donal Burke again shining for the Dubs in the forwards. But Cork were the more wounded animals from the provincial competition. Maybe Dublin ran out of steam after putting so much into their near comeback last week.

It sends Cork into the next round of the All Ireland, with Mattie Kenny pondering what could have been as we head into the end of winter.

Business as usual for the reigning All Ireland Champions Dublin, as they began their path to what could be an historic six All Ireland titles on the bounce. But first Dessie Farrell’s men will relish the chance of a 10th provincial title in a row, as they swept aside Westmeath with ease.

Westmeath may have given a good second half showing but there was never a doubt on the outcome of this game as Dublin imposed their comfortable game plan in O’Moore Park, controlling the tempo and possession as onyl Dublin know how.

Ciaran Kilkenny again showed the maturity and poise of a multiple champion, orchestrating the majority of Dublin’s movement, scoring 0-06 of Dublin’s 0-22.

Westmeath never threw in the towel to their credit, but the result was never if Dublin would win, but how much they would win by.

Dessie Farrell will happy with his first championship win as Senior Manager and will look forward to Laois next weekend in the last four, with another hurdle to jump on the path to Sam Maguire.