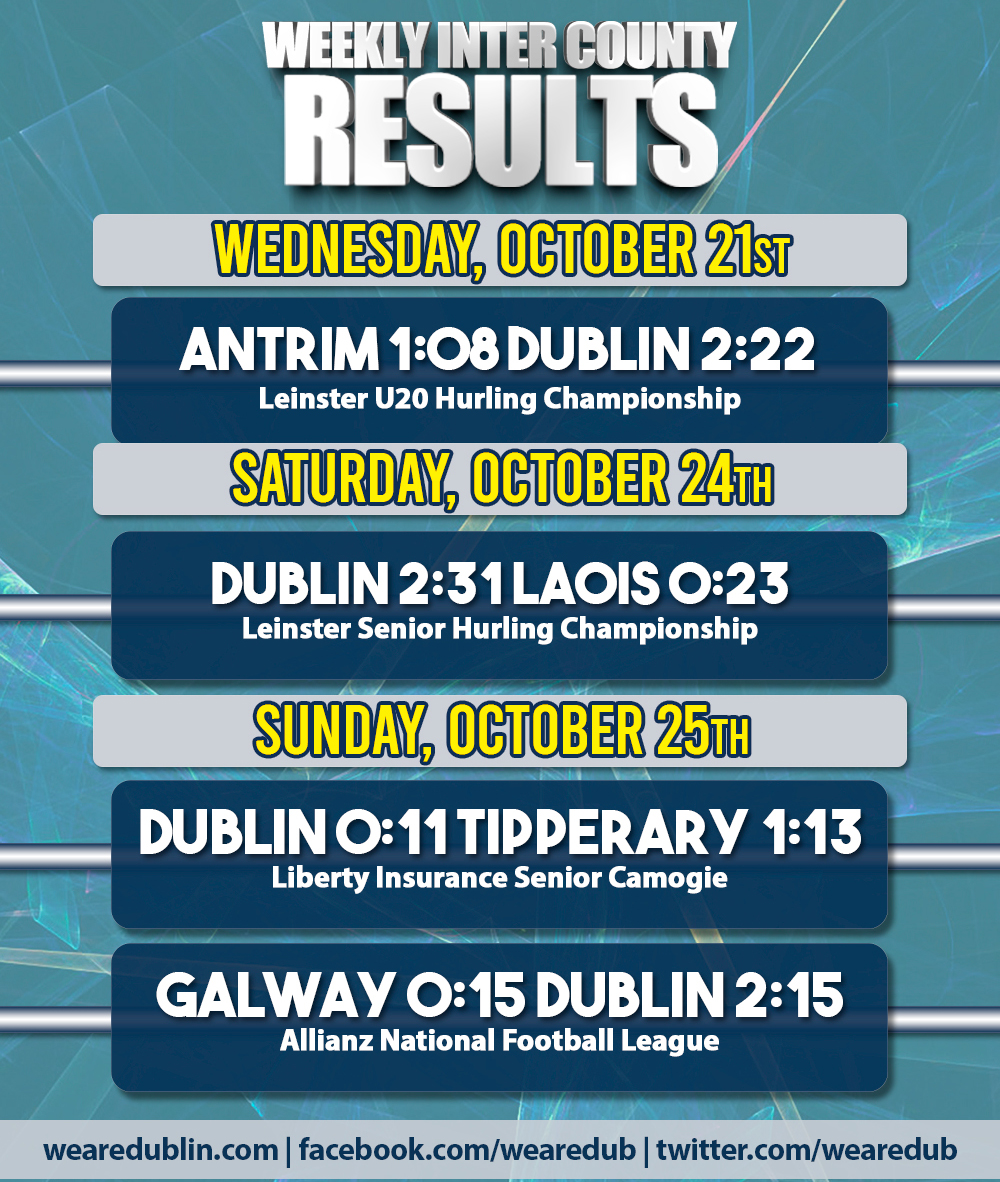 Another week over. And while we may not be allowed to enjoy tomorrow’s Bank Holiday like we would in times past, at least we had some action to enjoy. And we can look forward to a bit more next weekend with the Senior competitions all continuing. But let’s round up the Inter County Results from all this week’s action.

Dublin’s run in the Leinster U20 Hurling Championship came to a sudden halt this week, but not becuase of Wednesday’s result. We now know that only Senior competitions may continue while we content with the current Level 5 COVID 19 restrictions. But If it’s the last action we see this year from Paul O’Brien’s Dublin Hurling panel, it was at least a more than convincing win.

The boys in blue held a four point lead at the break. And once they got control of the fixture they methodically moved out of sight of opponents Antrim. They’ll need to wait over 5 weeks before they know if the remainder of the competition will go ahead. They are due to face Offaly in the competition Quarter Final.

Donal Burke showed just how good a hurler he was last night in an empty Croke Park as Dublin exacted some revenge on Laois who had sent them out of the All Ireland Championship last year. And the prize for the 14 point victory is a Semi Final date with Kilkenny next weekend.

Laois battled hard to try close the gap, and narrowed it to six with 15 minutes to go. But that was as close as they got to Dublin, who showed some serious scoring prowess. Burke chalked up 1-16 of Dublin’s 2-31. Substitute Eamonn Dillon bagged a stoppage time goal to put that extra bit of shine of the evening scoreboard.

The difference between last night a last year’s All Ireland fixture was Dublin’s fitness and skill in teh close of the game. Laois may have been without a number of their Joe McDonagh Cup winning panel but that shouldn’t take away from the performance put in by Mattie Kenny’s men.

It wasn’t the start wanted or needed by the Dublin Senior Camogie panel as they set off on their All Ireland journey. But all is not lost in this competition. Today’s defeat will be a difficult one to swallow, but Dublin’s performance showed some excellent ball skill and fitness in Parnells. Tipperary, who had already a game under their belts, looked that lttle bit more match ready, and today’s win secures their place in the competition’s Quarter Finals.

Dublin will take some huge positives from today’s game as they make the trip to Clare next weekend. A win on the road will be enough to send Dublin through to a Quarter Final.

Ashling Maher led Dublin’s scoring this afternoon with 0-07 (5f, 1 ’45), but there were great individual performances across the team. Lets hope they can secure that win over Clare next weekend and advance.

With Kerry securing the Division football title with their win over Donegal yesterday, today’s final round game between Dublin and Galway might have been nothing more than a dead rubber fixture. But both sides played like everything was at stake, probably more to prepare for their upcoming provincial championship runs.

And while Galway led for the large parts of the game, it was Dublin who ran out the stronger to win on a 2-15 to 0-15 victory. The game was deadlocked for the most part with on a few scores between them and Galway shading the lead. But two second half goals, from substitute Sean Bugler and full forward Con O’Callaghan turned the tide in favour of the travelling team to leave Pearse stadium with the points.

Dublin now prepare to defend their Leinster Championship crown when they start that journey against Westmeath on November 7th.