The scores are in from a busy couple of days. Here are all this weekend’s Inter County Results 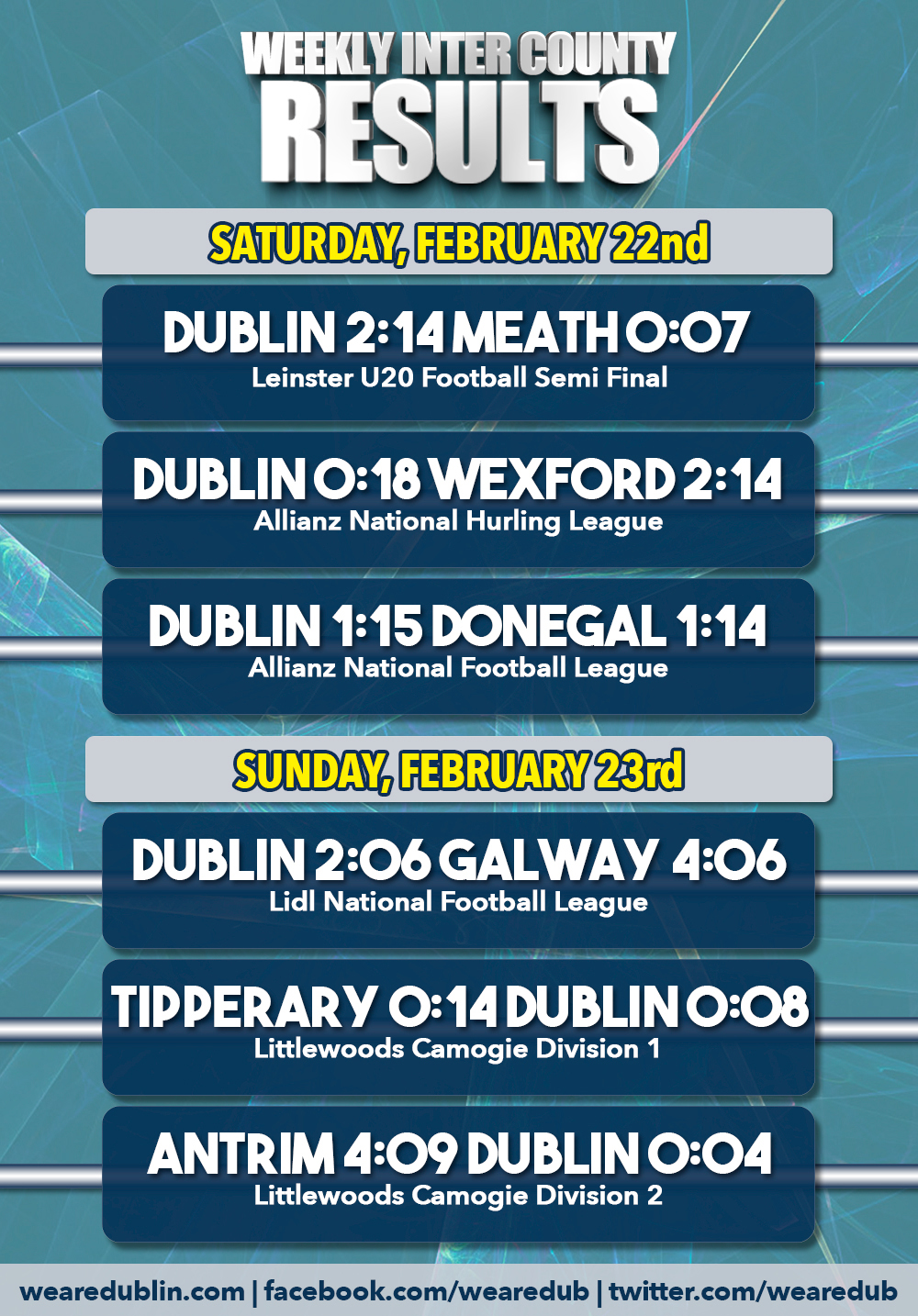 A busy weekend comes to an end and we’ve all the results from six games over two days. A mixed bag of results across the four codes.

Saturday started in winning ways with Tom Gray’s U20 Football panel securing a spot in this year’s Leinster Final. Goals from Ciaran Archer and Lorcan O’Dell saw them beat Meath comprehensibly in the competition Semi Final. The team now plays Laois in a repeat of last year’s final on March 6th at 7:30pm. The Venue has yet to be confirmed.

In the first of two games last night in Croke Park, Mattie Kenny’s hurlers saw a victory stolen from them at the death. The Dubs had put in a massive shift against Wexford. And when Ronan Hayes looked to have secured the win in additional time Jack O’Connor stunned them with a late goal. Two more scores from Paul Morris saw Wexford over the line. Dublin now need to go to Ennis and get a result, which won’t be an easy task.

Dessie Farrell’s Senior Footballers recorded their second win in the National Football league with victory over Donegal in the second fixture. They left it late again but it means Dublin are now unbeaten in four. For the second time this season, the Dubs conceded an early goal, and looked slow out of the block in the first half. But thankfully, they shifted gear and made life difficulty for Donegal after the break. Paul Mannion’s goal with four minutes of normal time remaining pushed them in front. And they held on to claim a reassuring one point victory.

A lesson learned in all three games this afternoon, as all three ended in defeats for dublin teams. At DCU Galway recorded their third League victory, consigning Dublin to their second defeat of the competition. Three first half goals saw the girls from the west open up Dublin’s defence with ease leaving the six clear at half time. Dublin tried to press but Galway seemed to have the answer every time.

Cousins Roisin and Treacy Leonard recorded 3-03 between them in a polished performance. Dublin’s Carla Rowe led her sides charge with 1-04 of their 2-06. Certainly not the repeat of last year’s All Ireland we expected.

A double blow elsewhere for Dublin Camogie as both their senior and Intermediate side fell to Tipperary and Antrim respectively in the Littlewoods Camogie League. Tipperary are now two for two in Division 1, beating Dublin 0-14 to 0-08 at Bansha this afternoon.

Tipp were 0-07 to 0-05 leaders at the break after Dublin had drawn level on five each. With 10 minutes to go in the game Dublin had got within a point of their opponents thanks to Martha O’Donoghue and Caragh Dawson but Cait Devane and Roisin Howard raised more white flags to see Tipp over the line.

Meanwhile Dublin’s Intermediate endured a 4-09 to 0-04 defeat in Antrim. Dublin only scored two points in either half and were facing the second half trailing Antrim by 4-05 to 0-02. with only six scores registered between the two sides after the break Antrim had the work done in the first session to win comfortably.

And that’s all the Inter County Results for this week. Stay tuned to www.wearedublin.com for next week’s fixtures and more.