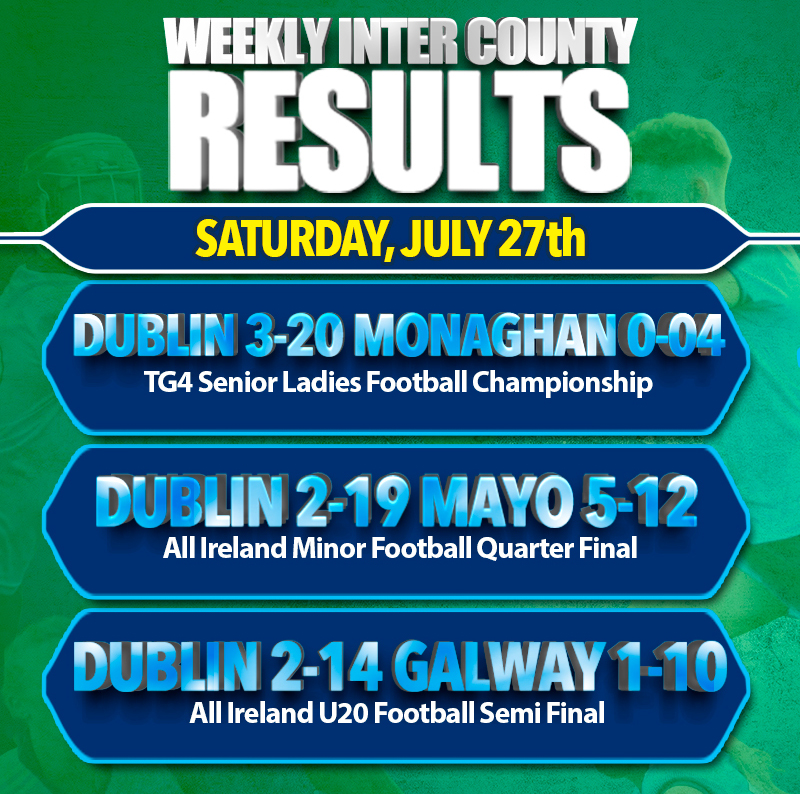 Fantastic weather being enjoyed in the capital this week and more to come by the sounds of it. It’s going to be a busy Bank Holiday weekend next week. But let’s get you up to speed on this weekend’s results. Three games yesterday, all football. Here’s the details.

Reigning Champions Dublin safely made their way through to the TG4 All-Ireland quarter-finals by comprehensively beating Monaghan to top Group 2 after a one-sided affair at Parnell Park.

The ease of their navigation from the group will both delight and worry Dublin manager Mick Bohan in equal measures.

The lack of a test may be of concern down the line. But for now, having taken care of Waterford by 18 points and Monaghan by 25, they ooze confidence with that scoring ability.

Dublin captain Sinead Aherne returned in place of fellow Sylvester’s forward Niamh McEvoy, who was ruled out with injury, and she produced a stunning performance which yielded 1-11.

In a thrilling opening game in Glennon Bros Pearse Park Mayo secured their path to the All Ireland Minor Football Semi Final with victory over the Dublin Minors. Mayo Keeper Luke Jennings denied Dublin’s Fionn Murray to hold on for a win. Had the shot hit the net it would have been Dublin’s day by the minimum.

Goals for the Connacht champions came from Ethan Henry, Ciaran Mylett, Ruairi Keane Rory Morrin and Paul Walsh. But the victory must go to Jenning in goal who was relied on heavily for the afternoon.

Ciaran Archer and his U20 team mates delivered for Tom Gray this evening against a Galway side who had beaten them only a month ago. And the reward is a place in this year’s All Ireland U20 Football Final.

The St. Maurs sharp shooter was the star of the show again today bagging 2-06. Manager Tom Gray expressed his feelings on upping their game facing the Connacht Champions. Galway had beaten Dublin in the John Kerins Development League in June, but Dublin got the better result today when it counted.

Dublin had Galway on the back foot from the throw in. And they remained calm and in control for the duration of the game.

Stay tuned to www.wearedublin.com next week, where we’ll have news of the final game for Dublin in the Liberty Insurance Intermediate Camogie Championship. We’ll also have news on Dublin’s upcoming All Ireland U20 Football Final, the Senior footballers last Super 8s game against Tyrone, and of course the Senior Ladies’ All Ireland Semi Final.

U17’s FACE QUALIFIERS AFTER DEFEAT TO MEATH IN LEINSTER CHAMPIONSHIP