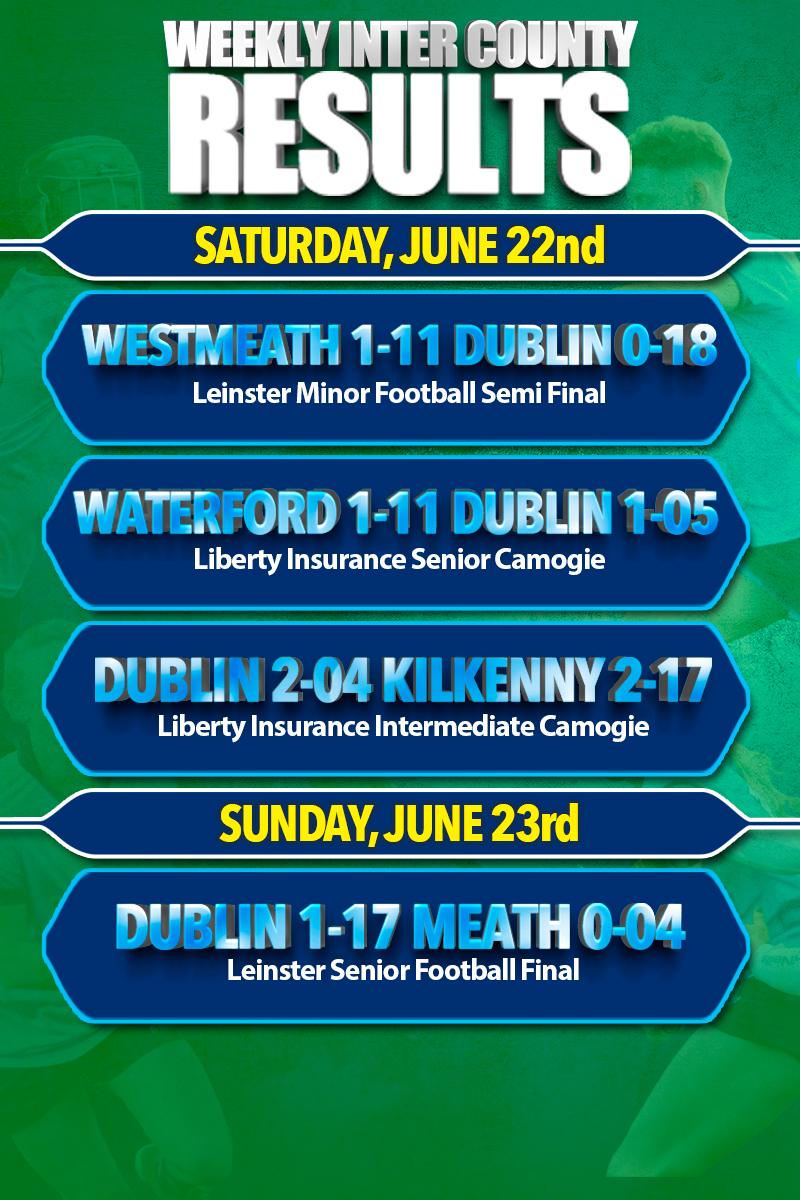 Another Week over in the Inter County calendar. With three games yesterday and one today, it’s been a mixed bag of results. Two losses in the Camogie Championship yesterday, but our Minor Footballers reached a Leinster Final with a win in the last four. And of course today Dublin’ Senior Footballer collected their ninth consecutive Leinster Championship in style at Croke Park this afternoon.

So here’s all the details from this weekend’s games.

After a good test of mettle, Jim Lehane’s Dublin Minor Footballers have qualified for this year’s Leinster Final. They will face Kildare who beat Laois in the competition’s other Semi Final. By the 36th minute of the game Dublin were trailing Westmeath by 0-05 thanks to a Ben McGauren goal. But that sparked the Dubs into gear as they finished the more complete side to secure the win.

The boys in blue fought tooth and nail for the rest of the game and dominated Westmeath across the park. Alex Rogers book ended the game with Dublin’s opening and closing score with great performances from Robbie Bolger, Fionn Murray, Luke Murphy-Guinane and Senan Forker.

Niamh Rockett supplied a captain’s performance in a 1-11 to 1-05 triumph over Dublin at Walsh Park yesterday in the Liberty Insurance Senior All Ireland Camogie Championship.

Rockett’s aerial prowess was a feature of this game, allied with a goal and two points from play, while Beth Carton shot eight points and Trish Jackman was imperious.

This was Dublin’s second defeat in this year’s Championship, leaving them an uphill struggle to reach the knockout stages with three games to go. Cork are Dublin’s next opponents before facing Tipperary and Clare.

Kilkenny’s Katie Nolan was the star of the show in her sides 13 point victory over Dublin in this Liberty Insurance Intermediate All Ireland Championship game.

The final scoreline though doesn’t tell the full story of the game. Kilkenny led by five at the break and an early point in the second half pushed the lead to six. But a clever goal by Dublin’s Niamh McCormack who flicked a high bouncing ball to net put just a score between the teams.

A minute later and Dublin’s chances of taking something from the game diminished with the harsh sending off midfielder and team captain Roisin O’Grady. And with Dublin down to 14 players Kilkenny took full advantage and outscored the Sky Blues by 0-12 to 0-02 to claim the valuable points on offer.

Dublin became the first inter-county side to complete a provincial nine-in-a-row, collecting the 58th Leinster title in their history after a 16-point defeat of Meath.

They had just five points on the board following a lacklustre opening half but outscored Meath by 1-12 to 0-3 after the break to take the win in style.

Meath’s shooting was deplorable, albeit it rough conditions in Croke Park, and they paid a heavy price for it. Three scores registered from play and one converted free, highlighting the twelve wides. To their credit they went man on man but completely ran out of steam as Dublin hardly pressed the pedal all the way down.

WE ARE DUBLIN GAA SENIOR 1 AND SENIOR 2 CAMOGIE FINALS...