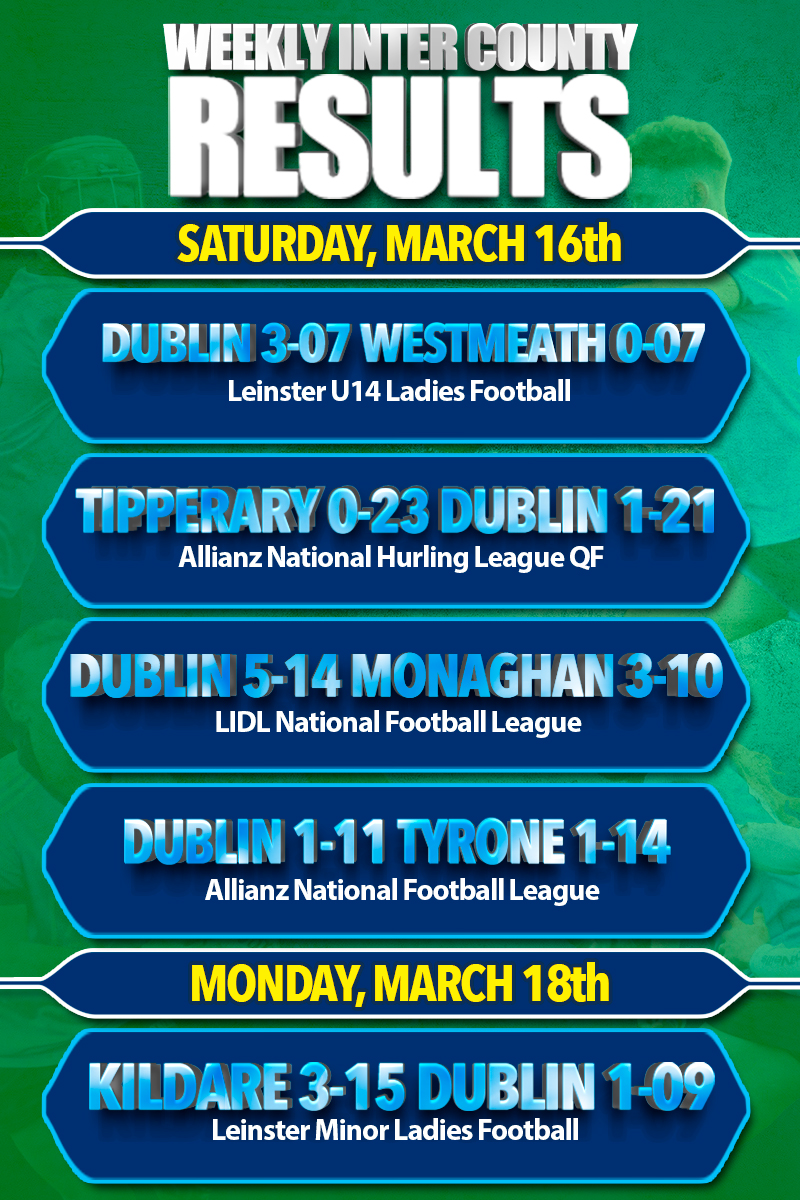 Certainly with its ups and downs, you can’t say this weekend wasn’t interesting. We witnessed some great victories, and sadly a couple of defeats. Dublin’s Hurlers are still in the hunt for the League title as they booked their place in the last four following a brilliant performance in Thurles. Both Dublin’s U14 and Senior Ladies chalked up wins in their respective competitions. The bad news is Dublin’s Senior Footballers are all but out of contention to retain their League crown. And this afternoon our Minor Ladies suffered their second defeat in the Leinster Championship.

Here’s all the scores and details.

A opening day win over Meath was followed on Saturday with a second victory on the bounce. Dublin’s U14 Ladies defeated Westmeath by 3-07 to 0-07 on Saturday afternoon. This result, combined with their 6-05 to 2-09 win over Meath, puts them in a great position for silverware.

Mattie Kenny steered his Senior Hurlers to their first League Semi Final since the 2015 season. The Dubs worked hard and earned their victory. Tipperary only managed to beat Dublin in wide counts and will be looking on those 18 wayward shots wondering what could have been.

Dublin led the game throughout the 70 plus minutes and only shot just half a dozen wides to book their place against Limerick next weekend in the Semi Finals. They led by 1-10 to 0-9 at the break having played with the breeze. But Tipp’s shooting seriously let them down racking up half their wide tally for the afternoon in the half.

Sinead Aherne recorded an outstanding haul of 3-03 at the DCU Sportsgrounds to guide Dublin towards an emphatic victory over Monaghan in Division 1 of the Lidl National Football League.

In her first start of the year, the 2018 Footballer of the Year was in scintillating form, combining superbly with Noelle Healy and Siobhan Killeen on the Dubs’ inside line. Despite the admirable second-half resistance of their northern counterparts, Mick Bohan’s champions ultimately secured a league semi final spot with two rounds to spare.

Dublin’s League title defence was ended this evening in Croke Park by Tyrone in a lacklustre performance by Jim Gavin’s side. The boys in blue looked heavy legged on Saturday night and although they enjoyed plenty of possession their passing and shooting was off the mark with a wide count at the end that was in double figures.

Tyrone used every weapon in their armoury, including the advance mark and kept their chances of a League Final slot alive, if only based on results next week in other games. For Dublin, they go to Cavan next weekend, but they have no chance of reaching the final, and will relinquish their crown.

There will be new minor champions crowned in Leinster this year as Dublin relinquished the minor title that they have held since 2011 following a second consecutive defeat in the 2019 championship, this time at the hands of a well drilled Kildare outfit.

Kildare throughly deserved their victory today. Defenders Emily Birch and Lauren Murtagh were class from start to finish while up front Sally Murphy, Orlaith Sullivan and Aoife Rathigan were in superb form, amassing 2-09 of their sides total tally of 3-15.

To their credit Dublin despite trailing at the break by 6 points (HT score Dublin 1-04 Kildare 1-10) battled hard in the second half but could not close the gap. Dublin were up against a formidable outfit who had previously secured both U14 and U16 provincial titles and knew how to defend a lead.