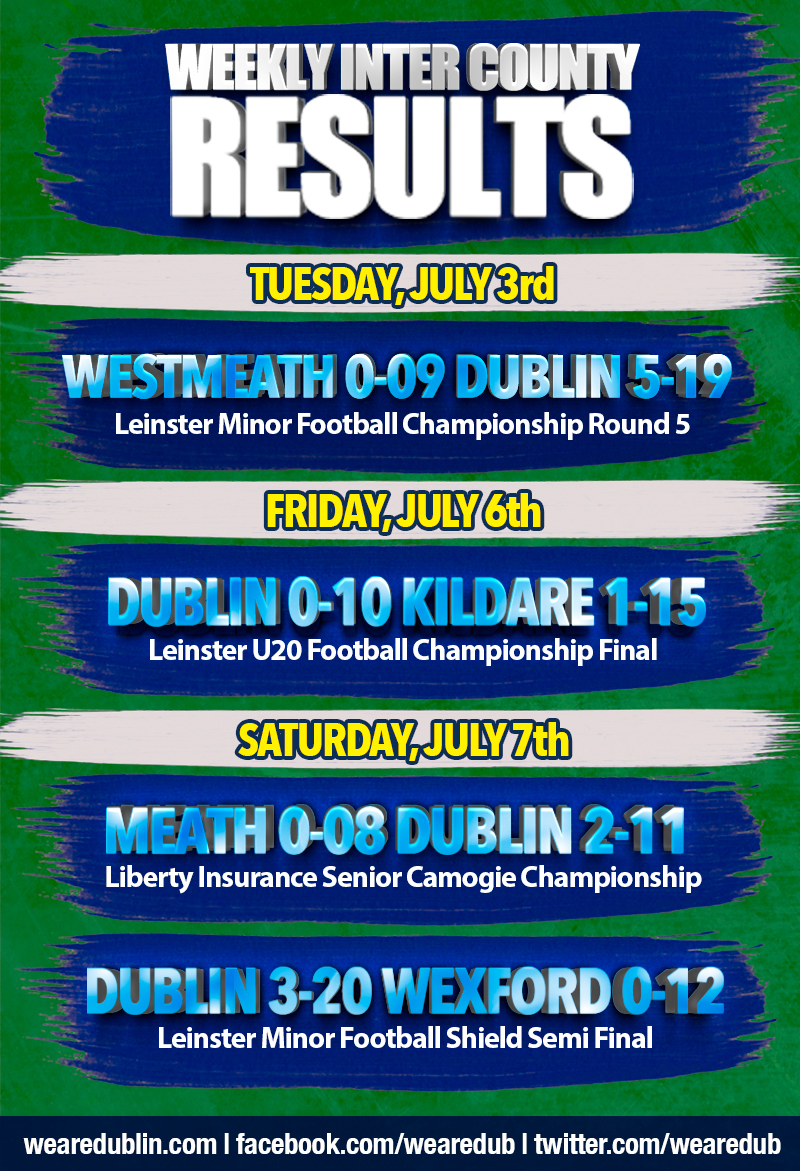 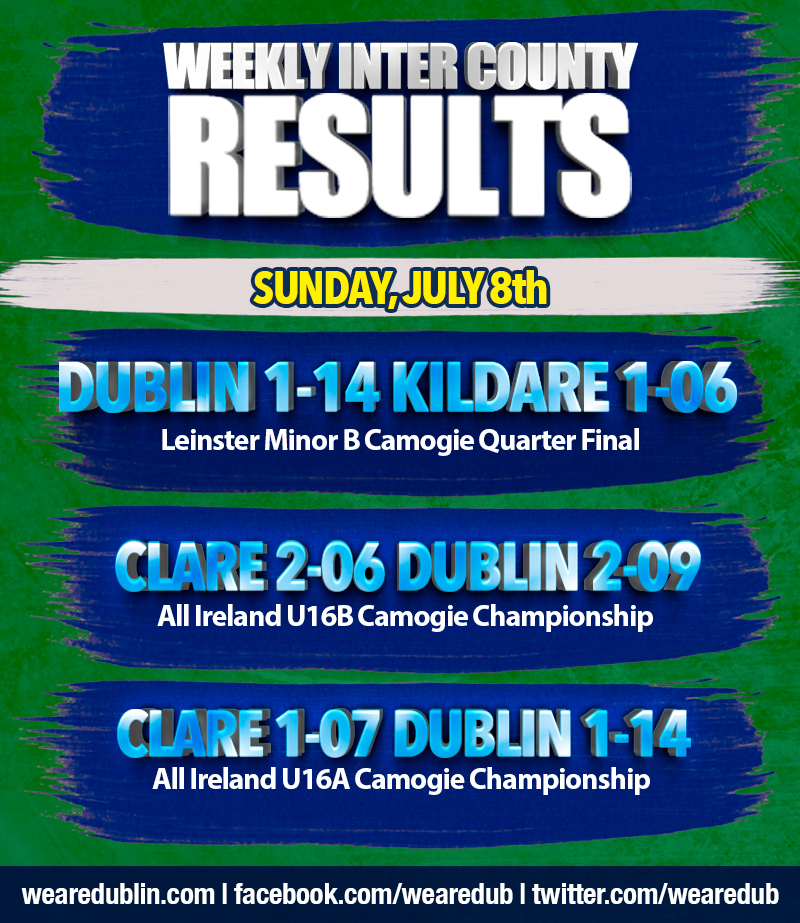 A packed edition of the Weekly Inter County Results to repot on this week.

The sun is still beating down in Dublin, and while a lot of the GAA pitches are suffering from scorching, the games are all still being played and the Dubs are still winning. Se here’s a round up of all the action from this week.

With defeats by both Meath and Wicklow in the round phase of the competition, Dublin needed a miracle to advance to the Semi Finals of the Championship. The travelled to Mullingar earlier in the to land a massive win over Westmeath in their final round game, with the score of 5-19 to 0-09. But other results unfortunately didn’t go in their favour, meaning they would have to settle for a place in the competition’s Shield  Semi Finals. Their opponents were Wexford, who had only won one of their four round fixtures.

Dublin met their opponents yesterday in Innovate Wexford Park and resounding victors by 3-20 to 0-12, putting them into the Shield Final next weekend to face Longford. Longford had a 0-01 win over Louth in their Semi Final, with the final score of Longford 1-17 Louth 4-07.

Dublin’s U20 panel missed out on the silverware in the inaugural Leinster U20 Championship, losing to Kildare on Friday in Tullamore. Tom Gray’s side had been unbeaten up to Friday night, seeing off Longford, Westmeath and Wexford to book their Semi Final slot against Meath last week. The Dubs sank their local rivals 4-16 to 2-10 to set up the Championship Final against Kildare.

But it wasn’t to be Dublin’s night as Kildare captured the first provincial U20 championship on a score of Dublin 0-10 Kildare 1-15, meaning Kildare advance to the All Ireland Semi Finals, ending Dublin’s year.

It was Round 3 of this year Senior Camogie Championship yesterday, and David Herity’s Dublin side got their second win of the competition, beating Meath 2-11 to 0-08 in Trim. The girls added yesterday’s win to their opening day win over Offaly putting them level on points with Tipperary and Offaly with two games to go.

The girls in blue will need to secure at least one win from the remaining games, and travel to Wexford next weekend in the hope of adding to their six points. Cork remain unbeaten and remain top of the group on nine points, and should finish top of the group unless Meath or Offaly have other plans.

Dublin got revenge this afternoon on the team that beat them in last year’s Minor B provincial final, Kildare. Joe Leonard’s side didn’t disappoint under the hot sun in O’Toole Park finishing eight points clear of their opponents on a score of 1-14 to 1-06. Today’s win put them into the provincial semi finals next weekend, where they will face Kilkenny for a place in the final.

Dublin’s U16 A & B panels both made the trip to Clare today for a double header to start this year’s All Ireland Championship. And the good fortune was shared both panels as they registered wins on their first day out. The B panel started the day with 2-09 to 2-06 win, followed immediately by the A’s also winning 1-14 to 1-07.

The next outing for both teams is a road trip to Cork on July 22nd, and they’ll the rounds welcoming Kilkenny’s A & B panels to Dublin before they see if they can advance to the knock out stages.

And that it. All reported and shared.

Tune in tomorrow evening where we’ll update you on the coming week’s Inter County Fixtures.