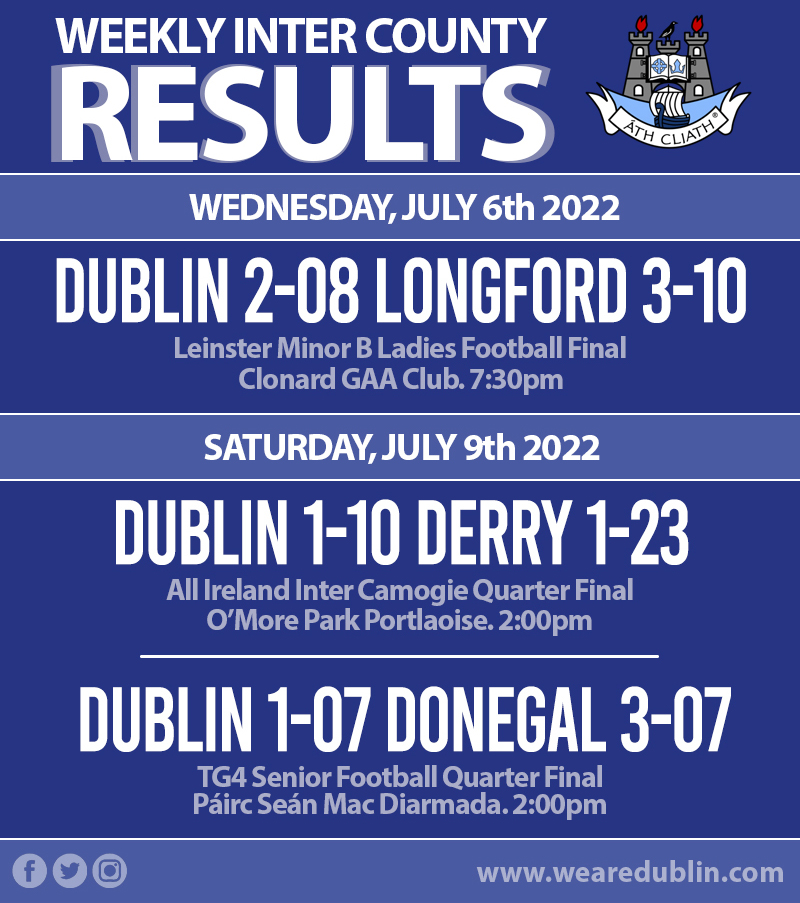 It’s rare we’re on a Monday looking back at a week where all Dublin teams involved in championship action ended up on the losing side of results. But sadly that’s the reality today. And it’s so strange to think they the 2022 GAA season is almost over for Dublin. There are still a couple of teams still involved, but for now let’s round up the results since last Wednesday.

The Leinster Minor B Ladies Football title will reside in Longford this year after their 2-08 to 3-10 win over Dublin last Wednesday. Despite Dublin leading the Longford girls by 2-02 to 0-02 13 minutes into the game, Longford rallied back and by the break they were one score the better on 2-05 to 2-04.

In a cagey second half, Dublin only managed to register four more points to their tally, while Longford scored a third goal and added five points to their side of the scoreboard finishing 3-10 to 2-08 winners.

After qualifying for this year’s All Ireland Inter Camogie Quarter Final, Dublin’s championship run came to an end against a strong Derry outfit on Saturday on Portlaoise.

Despite a sluggish start from the Ulster ladies, they came good against a Dublin side who committed themselves to the game from beginning to end. Derry may have been favourites going into Saturday’s tussle, but Jimmy Greville’s panel were in no mood to roll over.

Inspired by another brilliant performance from Siobhan Kehoe, Dublin lead Derry by 0-09 to 0-08 at the half time break. Ciara Holland and Ellen Dunphy joined Kehoe on the scoreboard giving the Dubs the slightest of advantages.

Derry equalised immediately on the restart and followed it up with further scores before Aine McAllister hit the net. Holland netted for Dublin to give her team a fighting chance. But Derry were too strong to hold off and ultimately finished the game 13 points the better of Dublin, ending their season.

Karen Guthrie scored two goals for Donegal as they stunned Dublin to advance to this year’s TG4 Senior Quarter Final. After a solid first half performance, Donegal were 0-04 to 0-01 to the good as DUblin struggled to break down the defensive barrier built by their opponents.

On the restart Donegal played breaking football to capitalise, with Yvonne Bonner registering their first of three green flags. Guthrie, who came on to joint the action scored a brace, before Carla Rowe found the net for Dublin at the end of proceedings, but Mick Bohan’s side had spent large spells with possessons with nothig to show and ultimately ran out of time.

The 3-07 to 1-07 scoreline spelled the end of the Championship for Dublin, which was not to script with Dubs strong favourites to reclaim the All Ireland title. 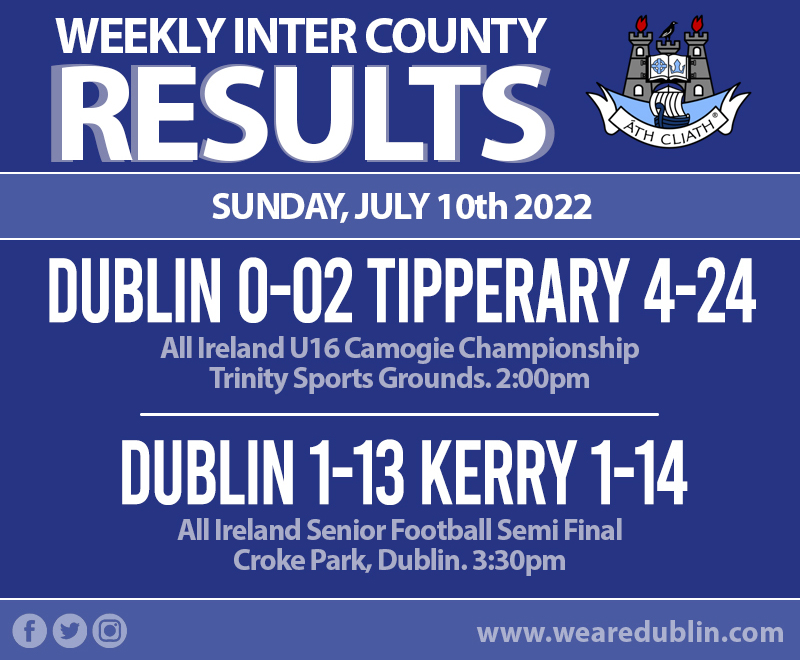 Tipperary followed up a strong victory over Waterford to record a second win over Dublin’s U16’s yesterday afternoon at Trinity Sports Grounds. And sadly that means the end of an All Ireland dream for Niall Daly and the Dublin U16’s.

Dublin, who had already lost to Waterford 2 weeks ago needed a strong performance against Tipp to stand any chance of advancing to an All Ireland Knockout Draw. But sadly that didn’t pan out. Dublin only managed 0-02 over the hour of Camogie with Tipperary chalking up 4-24. Dublin’s 2 scores came in the first half, and they failed to score anything further in a second half dominated by the visitors.

Tipperary and Wexford came out of the open draw following the game to go straight to the competition’s Semi Final stage. Cork, Limerick, Galway and Waterford will play out the Quarter Finals for a chance to join them.

The dream is over once again for Dessie Farrell and the Dublin Senior Footballers. And for Kerry, a huge first win over Dublin in the Championship for 13 years sends them into an All Ireland decider with Galway in 2 weeks time.

Yes, Dublin and Kerry played out another incredible battle at Croke Park, which has now become a fixture that will never disappoint. And an ending similar to the 2011 final battle between the side that saw Stephen Cluxton land a late long range free to secure the win, Sean O’Shea also kicked into the Hill 16 end of Croke Park to secure Kerry their final steps to this year’s decider.

Trailing by 1-08 to 0-06 at half time, Dublin proved once again that they have a spirit that’s impossible to break. Despite Kerry increasing their lead to 0-06 immediately on the restart, Dublin rallied and When Cormac Costello buried the ball to the net in the 44th, the comeback was on. With the sides level in the dying moments of the game, a foul gave Kerry the last kick of the game, and O’Shea didn’t disappoint from the long range attempt.

The game could have been very different for Dublin with Kerry awarded a penalty in the first half. But thanks to Evan Comerford, O’Shea’s shot never reached the net. But the game will be remember for O’Shea’s incredible free conversion to send them to an All Ireland Football Final.

And that’s all the results wrapped up for another week. We’ve got All Ireland action in both Ladies Football and Camogie this week so stay tuned for news on both games throughout the week