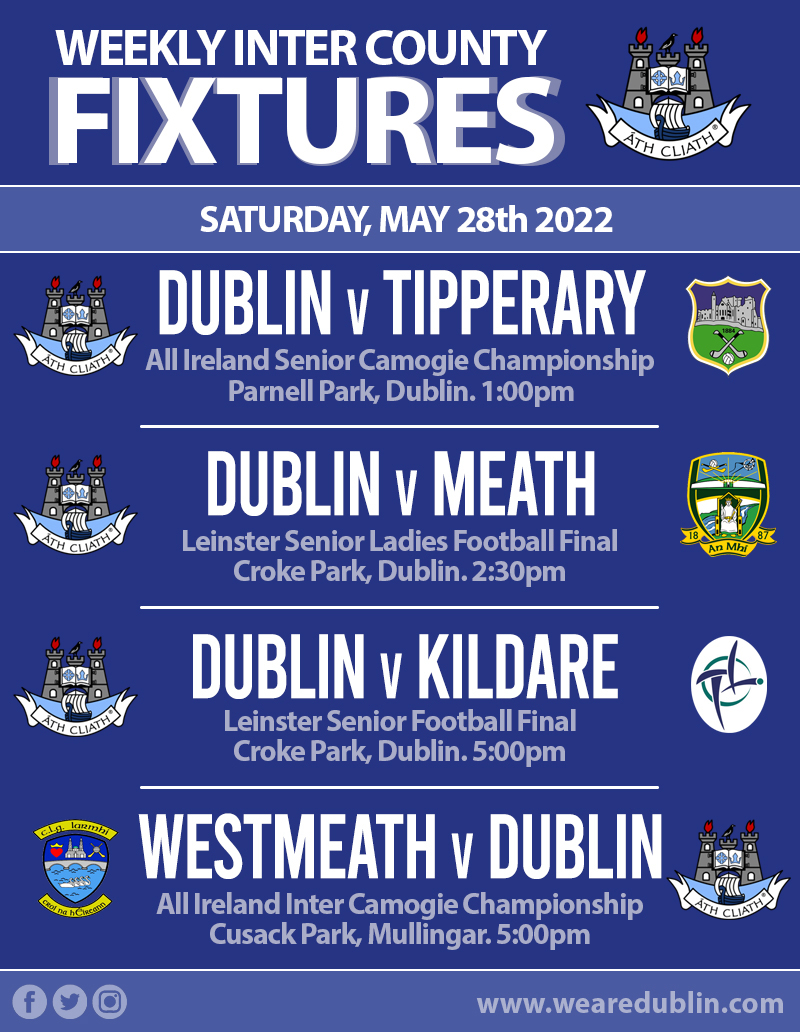 Saturday’s don’t come much bigger than the one we have in store this weekend for Dublin GAA fans. Four fixtures will be played across four individual competitions. We see the completion of two Leinster Senior Championships, and All Ireland action at Senior and Intermediate grades.

Adrian O’Sullivan must have been more than pleased coming away from Walsh Park last weekend, with his Senior Camogie Panel toughing it out to take a win against Waterford. They couldn’t have asked for a better start in what will be a tough Championship group.

Saturday sees Tipperary come to Parnell Park as their next opponents, and the Dubs will be hoping a home tie will bring them some more good fortune. For Tipp, they had to settle for an opening round draw against Clare at The Ragg. So it’ll be crucial for them to get more points on the board.

A win for Dublin will put them in an amazing position and take some pressure off before facing Cork in Round 3.

It’s hard to believe that this weekend Dublin and Meath will square off for the third time since last year’s All Ireland Final. But this one is the most important of the fixtures so far.

First blood went to Mick Bohan’s Senior Ladies Footballers back on March 5th with a late score seperating the sides in the LIDL National League. And a few weeks ago it was similar situation in Leinster with the minimum between the two rivals. But it was Meath who left Parnell Park with the victory.

Saturday they face each other again, with the provincial title up for grabs for the first time in a few years. With the result determining both teams positions in the upcoming TG4 All Ireland Championship there more than just a Leinster Championship at stake.

A twelfth Leinster title in a row is the prize for Dessie Farrell’s Senior Football panel in the evening throw in at Croke Park on Saturday. And the memories of a very underwhelming League Campaign appear to be fading as the weeks pass. People are already talking about Dublin seriously challenging for this year’s All Ireland Championship. But the Dublin manager won’t look past this Saturday provincial decider.

The bonus of a win this weekend is a place in the All Ireland Quarter Finals, avoding the dreaded qualifiers. Something both sides will not want to consider.

Dublin have looked convincing in both their victories over Wexford and Meath so far and will be confident ahead of this decider. Kildare made light work of Louth in theor Quarter Final, and held off a late challenge from Westmeath in their last four clash.

Dublin will not have forgotten the lost they suffered in Newbridge at the hands of Kildare earlier this year, with so much more at stake this weekend.

Jimmy Greville will have dusted off the disappointment of their recent Leinster Championship and will be focusing on a big All Ireland campaign at Intermediate level.

First up this weekend is a trip to Westmeath. That’s followed by two further away trip, to Laois and Kerry. Their round robin campaign ends with two home ties, against Galway and Carlow.

The knockout stages must surely be the goal for this upcoming Dublin side. And the panel and backroom team will be after a positive start this weekend.

Stay tuned for the rest of this week as we keep you updated on all these fixtures. We’ll keep you posted on team news and updates before Saturday, and we’ll have news and reports as we round up all games.