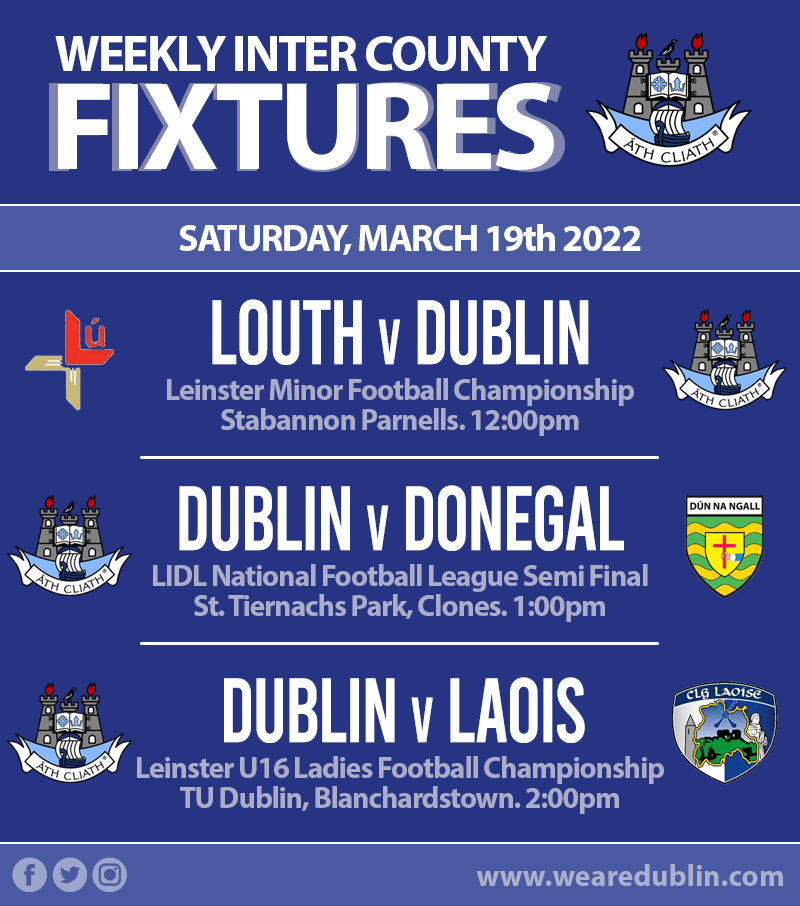 All four codes represented this weekend, and we’ll be treated to three games per day over Saturday and Sunday for weekly inter county fixtures. The Minor Football Panel, Senior Ladies Footballers and our Senior Hurlers all hit the road. Our Ladies U16 Footballers, Senior Camogie Panel and Senior Footballer all stay in the capital.

It’s the beginning of a new season for Dublin’s Minor Football panel. And the lads start their journey with a short trip to Stabannon Parnells for an early throw in against Louth. This is the first of three round games for Dublin as they return home in Round 2 to face Laois before hitting the road again, heading for Westmeath.

Last year Dublin made it all the way to the provincial final. Wins over Offaly and Kildare saw them book a place in a decider with Meath for the silverware. But sadly it was Meath who picked up the win in O’COnnor Park in Tullamore by 3-08 to 1-03 to become Leinster Champions. A new year and a new challenge. We’ll keep an eye on this one.

A 4-07 to 1-07 win over Waterford, followed by an impresssive 2-15 to 2-03 win over Cork, capped with a close 1-09 to 1-08 victory over Meath set up this weekends LIDL NFL Semi Final against Ulster side Donegal. And as the games have progressed, so have Mick Bohan’s panel.

Saturday brings us to Clones for a Semi Final Double Header. Dublin and Donegal lock horns in the opener at one. And the Dubs will still have their sites on retaining their League Crown. Donegal contested their rounds beating Galway and Westmeath only dropping points against Mayo in the Final Round. They won’t fear Dublin, and this is expected to be a tight and tough contest.

A 4-09 to 2-09 win at Navan O’Mahony’s in the opening round against Meath will have given Dublin a great boost to start this year’s Leinster U1 Ladies Football Championship. And Round 2 sees them back in Dublin to face Laois who were beaten by Kildare in their opening round game.

In Round 1, a hat trick from Izzy Dowling led to Dublin taking a commanding 3-05 to 0-04 lead into the half time break. Credit to Meath, they fought back bravely on the restart. But Dublin registered a fourth goal, coming from Sophia O’Brien, pushing them further in front. Poppy Byrne and Shiofra Deegan did hit the net late for Meath, but Dublin held a six point lead at full time. 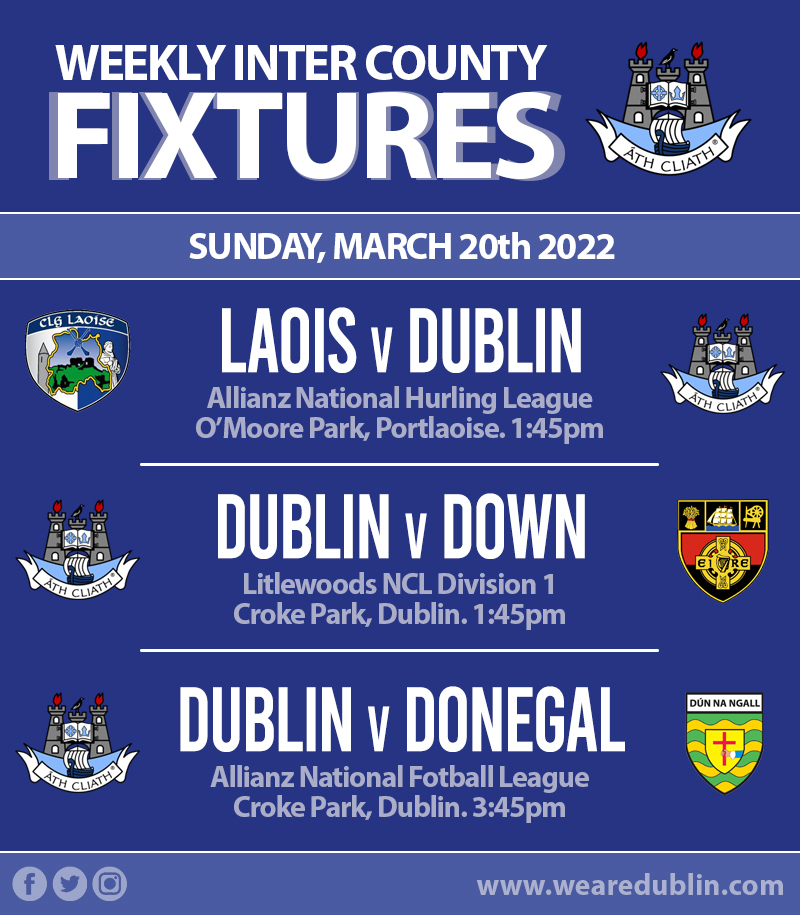 It’s the final round in the National Hurling League, and Dublin are in a solid position. Wins over Antrim and Tipperary, and a draw against Waterford sees Mattie Kenny’s side in third place in the Group B table. They’re 2 points off Waterford’s lead ahead of facing Laois this weekend. There’ll be a tough clash between Waterford and Kilkenny, and should Dublin beat Laois they’ll be hoping Waterford record a win too.

If Kilkenny and Dublin win it puts Dublin and Waterford level on points, but Waterford’s score difference so it’s not what Dublin fans will want.

Laois have lost three of four games, only grabbing one win over Antrim by one point in the last round. They won’t want to lose their final game, but they’ll find Dublin a tricky opponent, with the visitors looking to reach the knockouts.

While the Dublin Senior Hurlers are facing Laois in Portlaoise, Dublin’s Senior Camogie Panel will have the honour of playing their last National League fixture at Croke Park as part of a double header. They’ll welcome Down to close off their league campaign.

Dublin bounced back after their opening day loss to Galway and recorded an impressive win over Offaly in their next round. And despite losing to Tipperary last weekend, Adrian O’Sullivan will be pleased with his sides progress in this campaign. Dublin showed great skill and determination in last weekend’s matchup and will be looking to finish the final round with a win over Down.

Down come into this weekend’s game with their only win in the competition also against Offaly. They suffered heavy losses to Tipperary and Galway so they’ll be up for a challenge, and they’ll relish the chance to play in Croke Park.

After last weekend’s win over Tyrone in Omagh, there was a sense of relief for Dessie Farrell and the Dublin Senior Football panel. But one win in five is still a long way off where the reigning joint league champions will want to be with two games to go. Donegal sit mid table in Division 1 and will pose a tougher test for Dublin this weekend.

But there were a lot of positives last weekend, with signs of Dublin’s attacking strength and defensive stability returning after weeks of it’s disappearance. There’s still a relegation battle to contend with and the Dubs will need to leapfrog Kildare and Tyrone in the table to secure their Division 1 status. It won’t be easy, but it’s not impossible.

Donegal have suffered losses to Kerry and Monaghan, beating Kildare and Tyrone, while drawing their opener against Mayo. So they’ll want to fair better in their final two games.

Dublin U16’s bow out of championship to rampant Cork