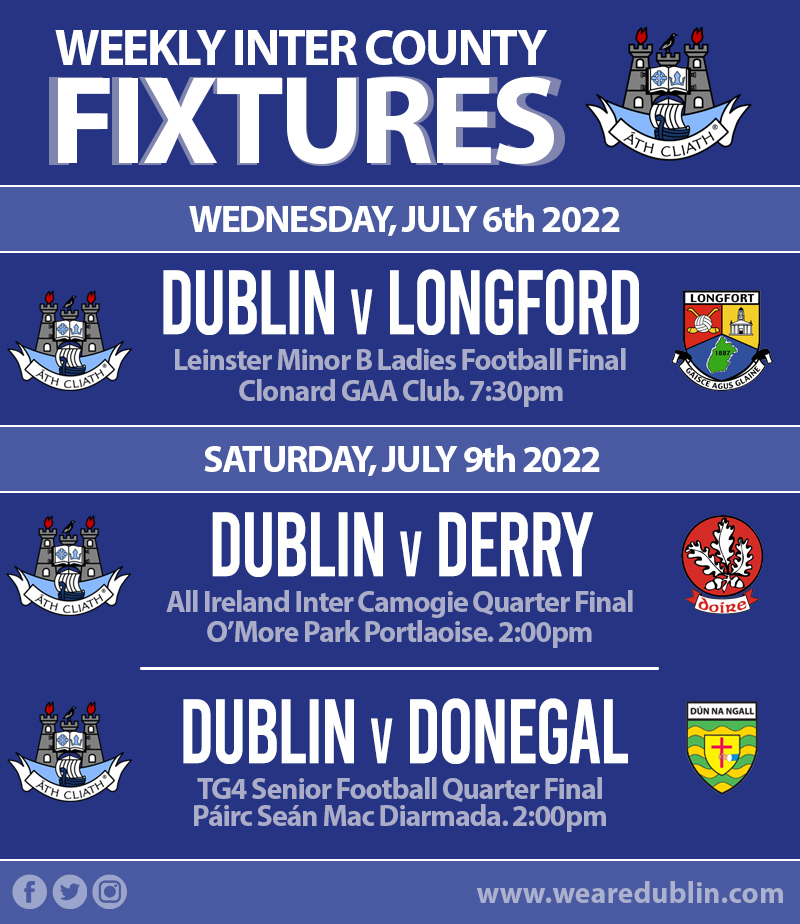 As we look into another week of fixtures there’s plenty to look forward to including a Leinster Final and of course some crucial knockout games in three All Ireland Championships. Lets take you through the fixtures one by one and get you up to speed.

We kick off the weekly fixtures tomorrow night as Dublin’s Minor Ladies Football panel challenge Longford for this year’s Leinster B title. The girls in blue came up short in this year’s A competition but will make the most of this Leinster competition to capture some silverware.

Over 3 rounds in the A competition Dublin suffered losses to both Meath and Kildare, with their only win coming against Laois in the middle round. Those results saw Dublin fail to qualify for the A decider. But all was not lost as a 3-06 to 1-10 victory over Wexford recently saw them book a place in tomorrow Leinster B decider and a chance to go on to challenge for this year’s All Ireland B title.

Throw in tomorrow at Clonard GAA Club in Meath us 7:30pm and the girls would definitely appreciate the support.

With both of Dublin’s Adult Camogie panels reaching the knock out stages of this year’s All Ireland Camogie Championships, it’s down to Jimmy Greville’s Inter side to get the ball rolling as they head to Portlaoise to face a strong challenge in Derry.

Dublin recorded a 1-11 to 1-07 win last weekend over Carlow in Group 1 to put them into 3rd position in the group table and securing Quarter Final slot. That combined a win over Laois in Round 2 and their game against Westmeath being voided changed their fortunes. Derry only dropped point against Group 2 winners Cork on their route to the knockouts and will be strong fancies this weekend.

But at this stage of the competition Dublin have absolutely nothing to lose with a semi final slot on the line.

The Dublin Senior Ladies Football panel are in a familiar position yet again, and will be hoping to reclaim the All Ireland title they lost to Meath last year. Standing in their way at the quarter final stage are Donegal. And Mick Bohan won’t have forgotten the Ulster ladies ending their LIDL Football League campaign early back in March.

But there’s certainly a more clinical feel to Dublin as we reach the business end of the season. And after 3 Rounds in their group, there was really nothing to cause any alarm. Dispensing of Cavan on a 5-14 to 2-04 scoreline in Round 1, they followed that with a 1-11 to 0-06 win over Tipperary in Moyne.

Shedding any doubt, Dublin picked up a 2-14 to 1-07 win over old foes Mayo to secure the top spot in Group A and set up a tasty duel with Donegal.

A win for Donegal over Waterford was all that was required for the Ulster ladies to advance from the smaller Group D, despite losing their other Round Robin fixture to Cork. In teh back of their minds they’ll know they’ve beaten Dublin already this year. But in the Championship that counts for nothing. Still, this should be a very tasty encounter. 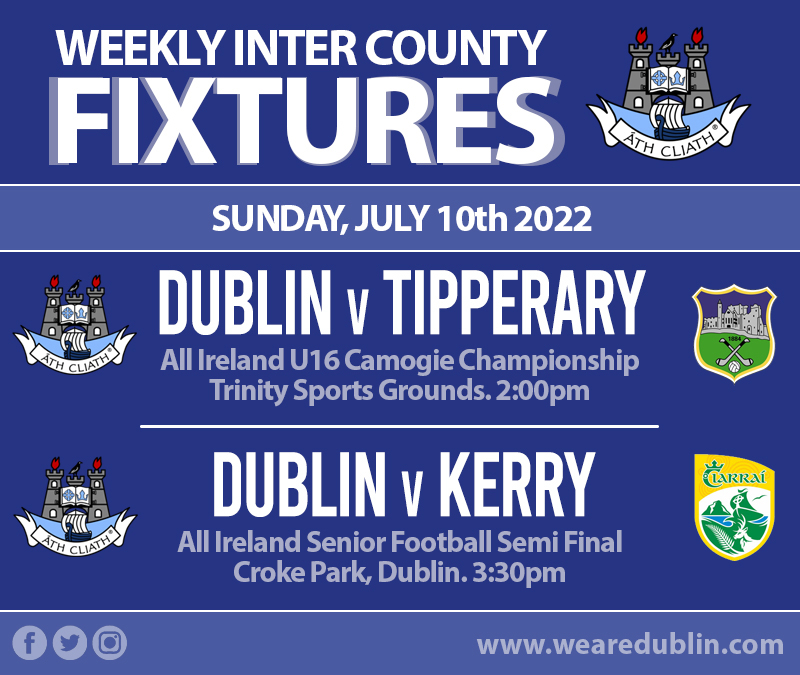 Sunday’s final round game in this year’s All Ireland U16A Camogie Championship is a must win in the fixtures if Niall Daly’s panel want to extend their season and set themselves up for a Quarter Final slot on July 17th.

They’ve left themselves some work to do after losing to Waterford by 2-07 to 0-08 in the opening round. But this competition is far from over and on the evidence of stellar performances by Dublin’s U16 in the provincial championship, they can certainly challenge Tipperary this weekend.

Tipp were winners over Waterford last weekend ending the Deise girls season. And while Dublin hold home advantage on Sunday, Tipp will be coming to the capital to make it 2 for 2.

There have been countless stories written and told about the rivalry between Dublin and Kerry over the years, and this Sunday both sets of fans will be hoping another rip roaring chapter is written.

It’s hard to deny that Kerry have been a team derserving of more than one All Ireland in the last decade. But 2014 is still the last time they’ve lifted the Sam Magure. With Dublin dominating proceedings since 2011, the men from the Kingdom might see this year as their chance to take the reigns. Many already believe that whoever comes out of this titanic battle on Sunday as the victor will surely be this year’s All Ireland Champions.

Dublin brushed off a disappointing League campaign that saw them relegated to Division 2 on the final day. But since then, and thanks to a more settled and bolstered squad, Dessie Farrell’s men have upped the anti. They breezed through a Leinster Campaignt they only managed to limp across the line in 12 months ago. And while it won’t have been their best All Ireland performance they got the job done with 0-11 to spare against Cork to set up this weekend’s clash with Kerry.

Kerry came into the All Ireland as Munster Football Champions, and sent Mayo crashing out of the Quarter Finals on a 1-08 to 0-13 result. There are four teams left, but this showdown between these 2 sides always means more and brings more from both sets of players.

Join us for the rest of the week. We’ll have more news on these fixtures. And we’ll keep you up to date on team annoucements and more.