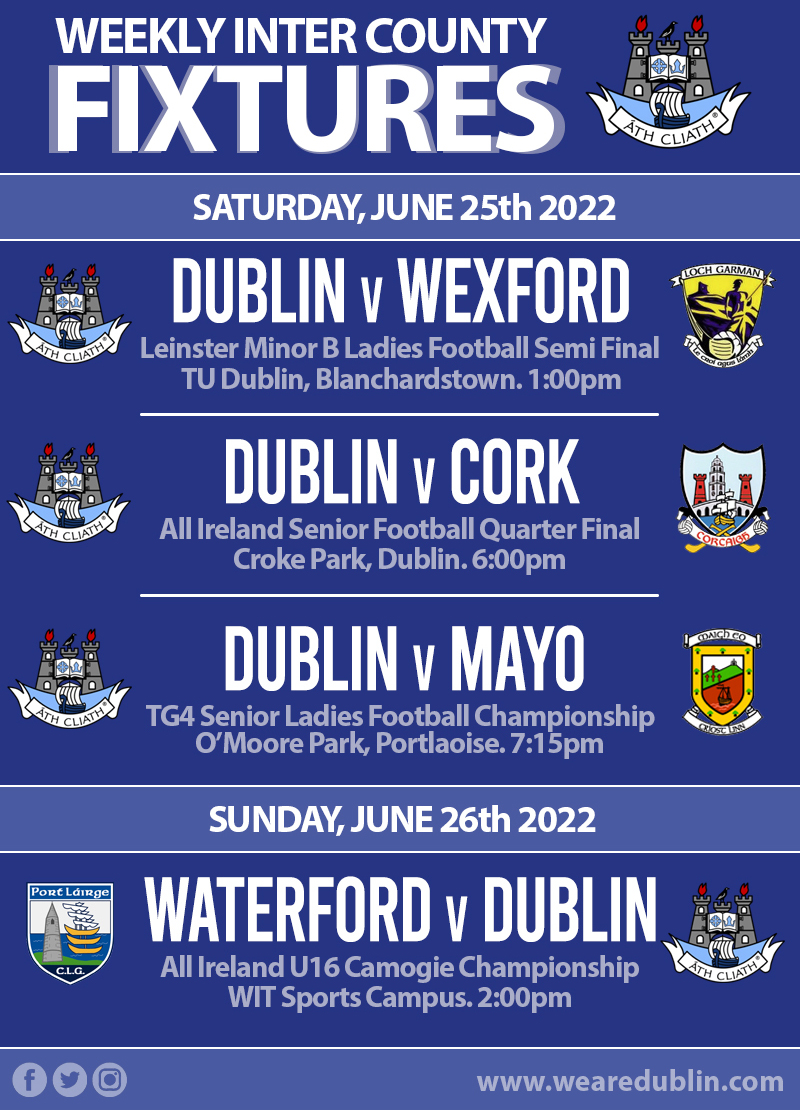 We roll into another huge weekend of Inter County Fixtures, with some very tasty games over Saturday and Sunday. Three massive All Ireland matchups and a Leinster Semi Final. Let’s get into the details on all four fixtures.

After three rounds in this year’s Leinster Minor A Championship, Dublin’s Minor Ladies Football panel had their fate sealed with a 4-07 to 1-11 defeat at the hands of Kildare. That defeat and a loss to Meath by 4-14 to 1-08 in the opening round cancelled out their Round 2 win over Laois. And it meant no knockout phase in the A Competition.

This Saturday, Dublin will now look towards the the Leinster Minor B Championship. And the first step on that journey is a Semi Final showdown with Wexford. The winner of this game will secure a slot on the decider, facing either Longford or Laois for the silverware.

It’s the time of the year that Dublin Football fans have come to appreciate for many many reasons. And after a disappointing end to the 2021 season, things in the Senior Football camp seem to have come to a positive place.

The National League Campaign is now a distant memory. And playing Division 2 Football will be as far from Dessie Farrell’s mind as you can imagine. Dublin once again bossed the Leinster Championship, and sent a message to every dressing room in every county that things are about to get serious, one more time.

The performances against Wexford, Meath and Kildare were the strongest we’ve seen since probably the 2020 season. The free flowing and punishingly attacking football has returned. And Dublin are serious contenders again to claim another All Ireland title.

Beaten by Kerry in the Semi Finals of the Munster Championship, Cork have worked their way through 2 qualifying rounds to set up this Quarter Final with the Dubs. The last time these two sides met was in the All Ireland Super 8’s back 2019 with Dublin winning by a 13 point margin on a 5-18 to 1-17 scoreline.

Mick Bohan’s side are two for two in this year’s TG4 Senior Football Championship. Mayo are also in the same situation. Dublin‘s 5-14 to 2-04 win over Cavan was followed last weekend by a 1-11 to 0-06 victory Tipperary in Moyne Templetouhy.

Mayo opened their account with a 1-16 to 1-06 won over Tipperary and last week struggled against Cavan but eventually secured  a second win on 0-16 to 2-09 scoreline at the close of the game.

Saturday’s clash with these two sides, who know each other very well, will decide who tops the group and who comes runners up. It’s about the knockout draw, but with both sides looking to lift the title, it won’t be a formality of any kind. There’s been soem great matchups between Dublin and Mayo over the years.

The game will take place on neutral soil at O’Moore Park in Portlaoise, and it will be streamed on Spórt TG4.

Niall Daly will once again lead the Dublin U16 Camogie Panel into what is one of the most hotly contested competition in any code at any grade in the country. And the goal for Dublin will be to win both their round games to advance further in this All Ireland Campaign.

They travel to Waterford IT Sports Campus this weekend for their first encounter, followed by a home tie against Tipperary in 2 weeks time.

The young girls in blue put in some classy performances in this years Leinster Championship. They recovered well from an opening round defeat to Kilkenny to put in a comprehensive performance over Offaly in Round 2, winning by 2-08 to 0-06. They closed off the rounds with a 0-10 to 0-08 win over Wexford to set up a rematch against Kilkenny, this time for the silverware.

We won’t forget the weather in a hurry that afternoon in Carlow, but despite a dogged performance, Kilkenny proved too strong for Daly’s girls. This weekend they will wipe the slate clean and go again.

And that’s all the details on this weekend’s fixtures. Stay tuned for team news and match reports from tomorrow through to Sunday.