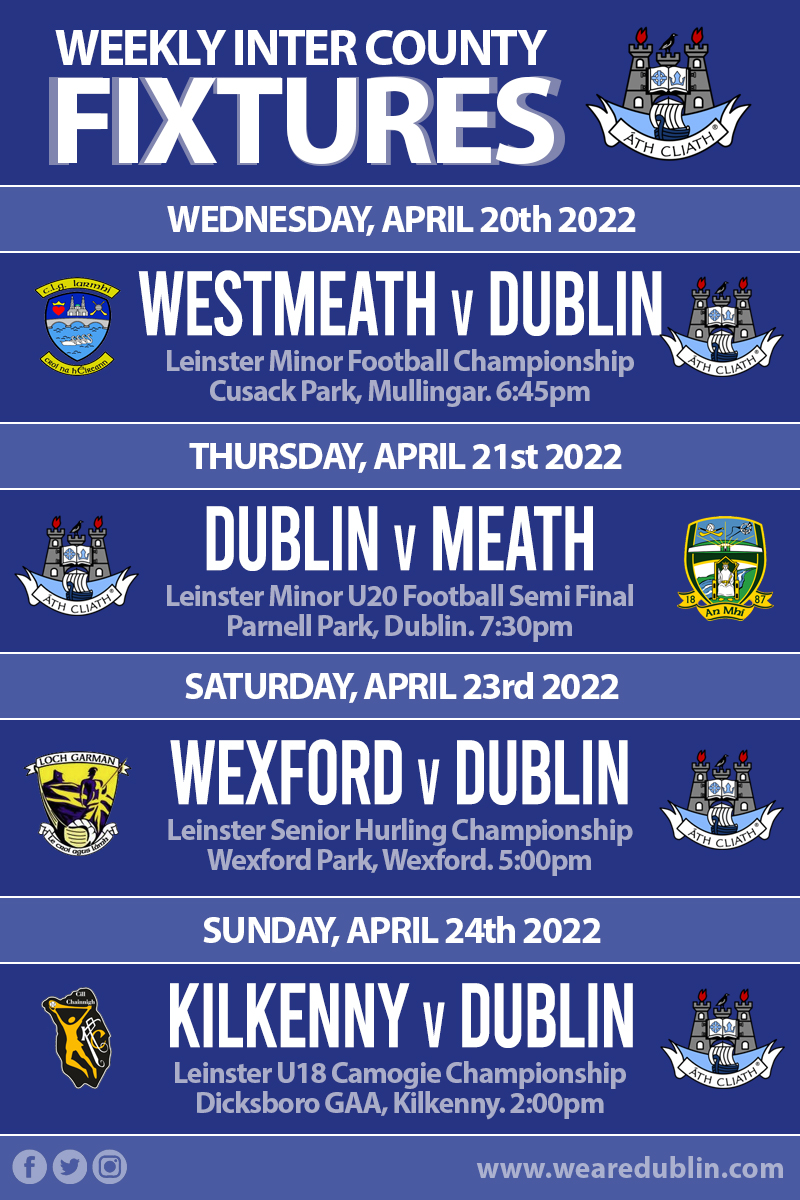 We come off a busy week and straight into another bunch of games starting tomorrow night. Leinster Minor and U20 Football take centre stage mid week, while Hurling and Camogie receive the baton at the weekend. Four more Inter County fixtures to follow.

The Dublin Minor Footballers have been impressive since the beginning of this year’s Leinster Championship. After two rounds, they top Group 1, and are poised to finish in that position and advance automatically to the competition Semi Finals.

It’s a big game for both sides who’ll want to come out on top of the Group and avoid a Quarter Final situation.

There’s no denying the the Dublin U20 Football panel toughed it out and are fully deserving of their Semi Final slot this week against Meath. But they didn’t make it easy for themselves against Westmeath in last week’s opener.

Down by 0-07 at half time it really looked like Dublin wouldn’t get past the Quarter Final stage having reached last year’s U20 provincal final. But they turned up the heat against Westmeath, holding them to a solitary point in the second half and racking 1-10 to win by a five point margin.

Meath come into this week’s game having beaten Longford on Saturday by one point on a 1-11 to 0-13 scoreline. Hopefully the advantage of Parnell Park wil favour the Dubs.

Laois caused Dublin some problems last weekend in the opening round of this year’s Leinster Senior Hurling Championship. That being said Mattie Kenny will take a lot from the 1-20 to 2-15 victory and move on.

What Kenny will want to improve thia weekend against a hot Wexford side is their shot selection and accuracy. Dublin squandered 18 scoring chances on Saturday evening which could have made a massive difference to the scoreline.

Wexford play their second home game on the bounce after drawing against Galway at Wexford Park in Round 1. Lee Chin converted a huge free at the death to tie up proceedings. Dublin will want to improve this weekend, but Wexford will want to register their first win. This could go either way.

John O’Connells Dublin Minor Camogie panel were in a battle with Wexford last weekend but came out the other side. The 1-07 to 0-09 win at Trinity Sports Grounds booked them a slot in the Leinster decider this weekend.

And they’ll make the trip to Dicksboro to face a Kilkenny side who were comprehensive winners over Offaly in their Semi Final. After the disappointment of the All Ireland competition, the Dublin Minors will want to finish out their year on a high, with something to remember.

Stay tuned throughout the week. We’ll have news and team updates from all the weekly fixtures.

As you were for Dublin Inters for Leinster Intermediate Championship semi...