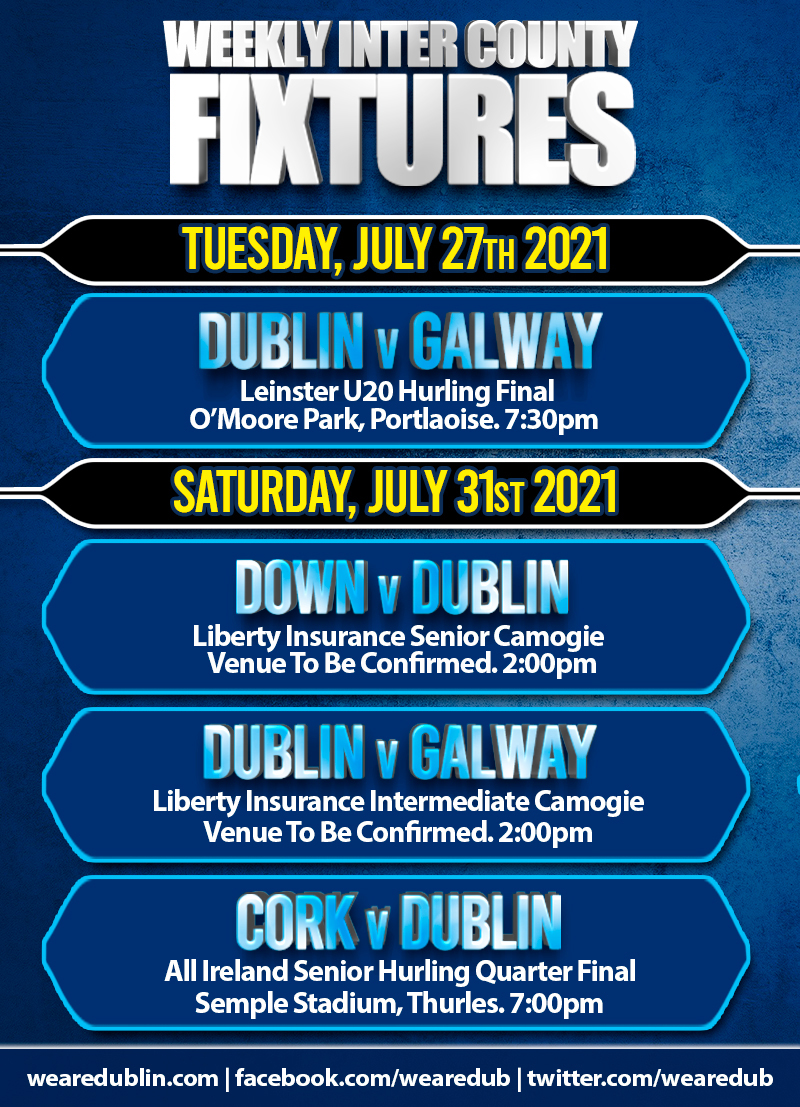 We had a busy week of action last week, and as if we need time to take a breath we head into another busy week of inter county fixtures. Starting tonight we’ve Inter County action in all four codes right through to Bank Holiday Monday. So let’s get you up to speed with everything.

In a repeat of the 2020 Leinster Final, which only took place on June 23rd, Dublin and Galway will square off again for this year’s provincial silverware. And if that last game was anything to go by, tonight will be a tough tight affair.

Dublin were two points to the good last month, beating Galway by 1-20 to 1-18. But their 2020 journey ended there as they were beaten by Cork a couple of weeks later in the All Ireland decider. Can they retain their Leinster Crown? We don’t have long to wait.

If Adrian O’Sullivan’s Dublin Senior Camogie panel are to avoid a relegation battle, they have to come away from Down this Saturday with a win in their final round game. They’ve suffered defeats to Cork and Waterford already. And with Down also losing to those two sides, it’s a must win for them too, which will add a bit of spice to this game. We’ll confirm the venue for this game later in the week.

A 1-19 to 1-10 scoreline saw Dublin’s Intermediate Camogie panel leave Pairc Tailteann yesterday with an opening day defeat in their Championship. And this weekend they’ll have home advantage when they face Galway. This will be a tough encounter but it’s early days for this side. They’ll be hoping for a better result before heading to Carlow for their final Intermediate Championship game.

The home venue has not yet been confirmed, but we’ll bring you the details when we have them.

Mattie Kenny’s Senior Hurling panel will look to dust themselves off after their Leinster Final defeat to Kilkenny. The 1-25 to 0-19 scoreline was tough on Dublin. They lost four of their panel at the last minute due to self isolation as a result of COVID 19. And things went from bad to worse when they took a chance on an injured Eoghan O’Donnell who had to leave the field in the opening minutes.

Nevertheless, they’ll relish an opportunity to face Cork this weekend for an All Ireland Semi Final slot.

Cork faced Clare at LIT Gaelic Grounds on Saturday, winning on a 3-19 to 1-23 scoreline to keep their All Ireland hopes alive. Throw in at Semple Stadium on Saturday night is 7:00pm.

Despite advancing to this weekend’s Leinster Senior Football Final, Dessie Farrell’s Dublin side will be looking for massive improvements on their 2-16 to 1-13 win against Meath a couple of weeks ago.

Dublin were in the box seat at half time with a comfortable 11 point lead. But Meath ignited a revival after the break, scoring 1-04 to put themselves back in contention. And the men from the Royal County got within a goal of Dublin late on only to lose that hold on the game in stoppage time.

Cormac Costello and Con O’Callaghan escalated the first half scoreline with goals. But it was ultimately the scores from Brian Fenton, Costello and Ciaran Kilkenny who made Dublin supporters a sigh of relief in a strong finale. 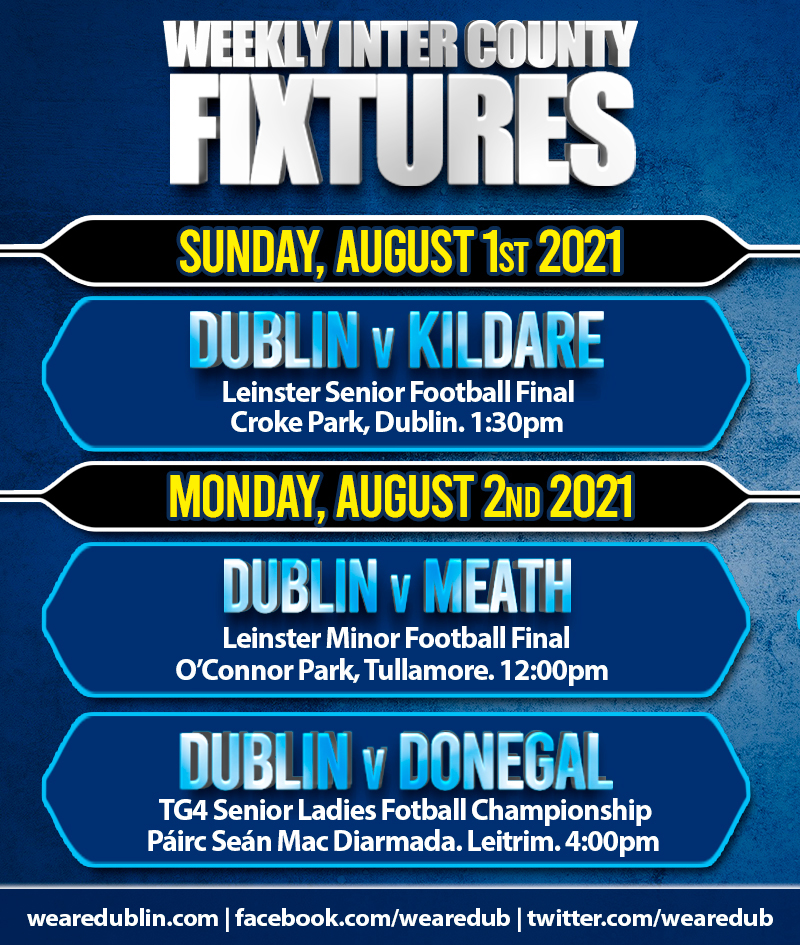 Ger Lyon’s Dublin Minor Football Panel toughed it out last week at Parnell Park. And despite a late charge from Kildare in the last 10 minutes it was Dublin who ran out winners, setting up this Leinster Final date with Meath.

Tadgh Gorman lead the charge for Dublin scoring 0-05. But it was a massive effort all round, with some quality defensive work that got the Dubs over the line. Dublin lead for the majority of the game, with the sides level only three times.

Meath advanced, beating Louth in their Semi Final, setting up another chapter in a storied local rivalry.

It’s the business end of the All Ireland Senior Ladies Football Championship. And Mick Bohan’s panel travel to Leitrim on Bank Holiday Monday to start the kncokout phases of the competition. Their first task is a tough encounter against Donegal.

Following their LIDL National League success over Cork, they’ve been North to face an beat Tyrone in an interesting contest. And a couple of weeks ago they secured their Quarter Final berth with a 6-12 to 1-10 goalfest over Waterford in Baltinglass.

Donegal progressed to the knockout phase of the competition and will have a crack at the five-in-a-row chasers after claiming the spoils in a winner-takes-all Group 4 clash against Kerry on Saturday evening.

And there you have it. Make sure to stay tuned here and on all of our social media platforms throughout the week for Inter County news, team annoucements and updates on all games.

BATTLING PERFORMANCE FROM PREMIER JUNIORS NOT ENOUGH TO OUST LIMERICK