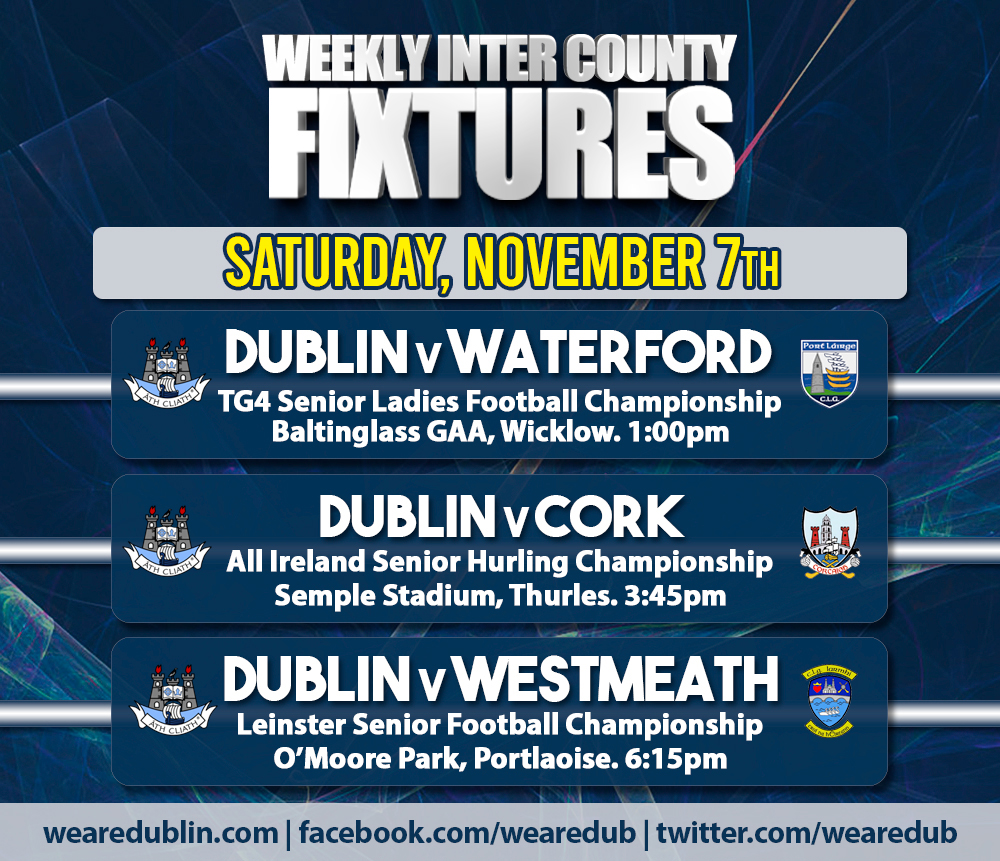 It’s really hard to believe how things are just motoring along. It hasn’t helped that all competitions bar the Senior Championships have been abandoned. But at least we still have Senior Inter County Fixtures to look forward to, hopefully right through to mid December. We lost our Senior Camogie panel at the weekend as they lost their second and final Championship game to Clare, ending their Champinship. But we’ve still go three teams competing for All Ireland success. And all are in action this weekend.

Mick Bohan’s Dublin Senior Ladies Footballers came through their first test of the Championship season at the weekend, beating Donegal by 2-13 to 2-10 in Cavan. And they hit the road again this Saturday, travelling to Baltinglass to take on Waterford in their final round game in the much shortened competition.

A win will see them through as Group 3 winners, and they’ll face the winners of Group 4 containing Armagh, Tyrone and Mayo.

Dublin had a nervy start at the weekend, but soon gained control assisted in a large part by Jennifer Dunne who put in a player of the match performance at midfield. And in true character, while under pressure from Donegal, the All Ireland Champions managed to maintain their lead and push on for the win.

While they may have lost out to Kilkenny by a solitary score at the weekend in the Leinster Semi Final, Mattie Kenny’s side put in a Massive second half performance to close out a 15 point gap and almost steal a victory, or at the very least could’ve forced extra time. But the luck was on Kilkenny’s side.

Nonetheless Dublin went into this morning’s All Ireland Draw and came out against Cork, another mouth watering tie that they’ll surely relish this weekend in Semple Stadium. The men from the rebel county, like Dublin, exited their provincial championship at the Semi Finals after losing out the Waterford on a four point margin.

It makes for an interesting matchup as Dublin have showed signs of greatnes. And a bit more consistency this weekend, combined with the skill and scoring they’ve displayed over the last two games, could get them over the line against a pride wounded Cork.

Do we dare to dream of the Six In A Row? Well whatever happens, the journey begins for Dessie Farrell and his Dublin Senior panel this weekend. Their first task at hand is the defence of their Leinster Championship. And the first stop aling the way is a Quarter Final with Westmeath this Saturday at O’Moore Park in Portlaoise.

Should Dublin get past Westmeath this weekend they’ll face the winners of the Longford v Laois Quarter Final in the last four. The competition will be three weekends on the bounce as Dublin aim for their 10th consecutive provincial title.

Farrell’s side finished runners up in this year’s National Football League Division 1 campaign, one point behind winners Kerry in the table. They followed their defeat to Tyrone in March with wins over Meath and Galway as the competition recommenced last month. Their eyes will no be focused on the job at hand. And with everything they’ve had to endure in such a strange year, it looks as if their focus hasn’t wavered.

Join us this Saturday as we bring you more news, updates and results from all three Inter County Fixtures.

BRENNAN: THERE’S NO INCH GIVEN AND NO INCH TAKEN, YOU’VE GOT...

KILDARE WILL BE YOUNG DUBS HARDEST TEST TO DATE

Dean Rock poised a little longer for the ultimate accolade