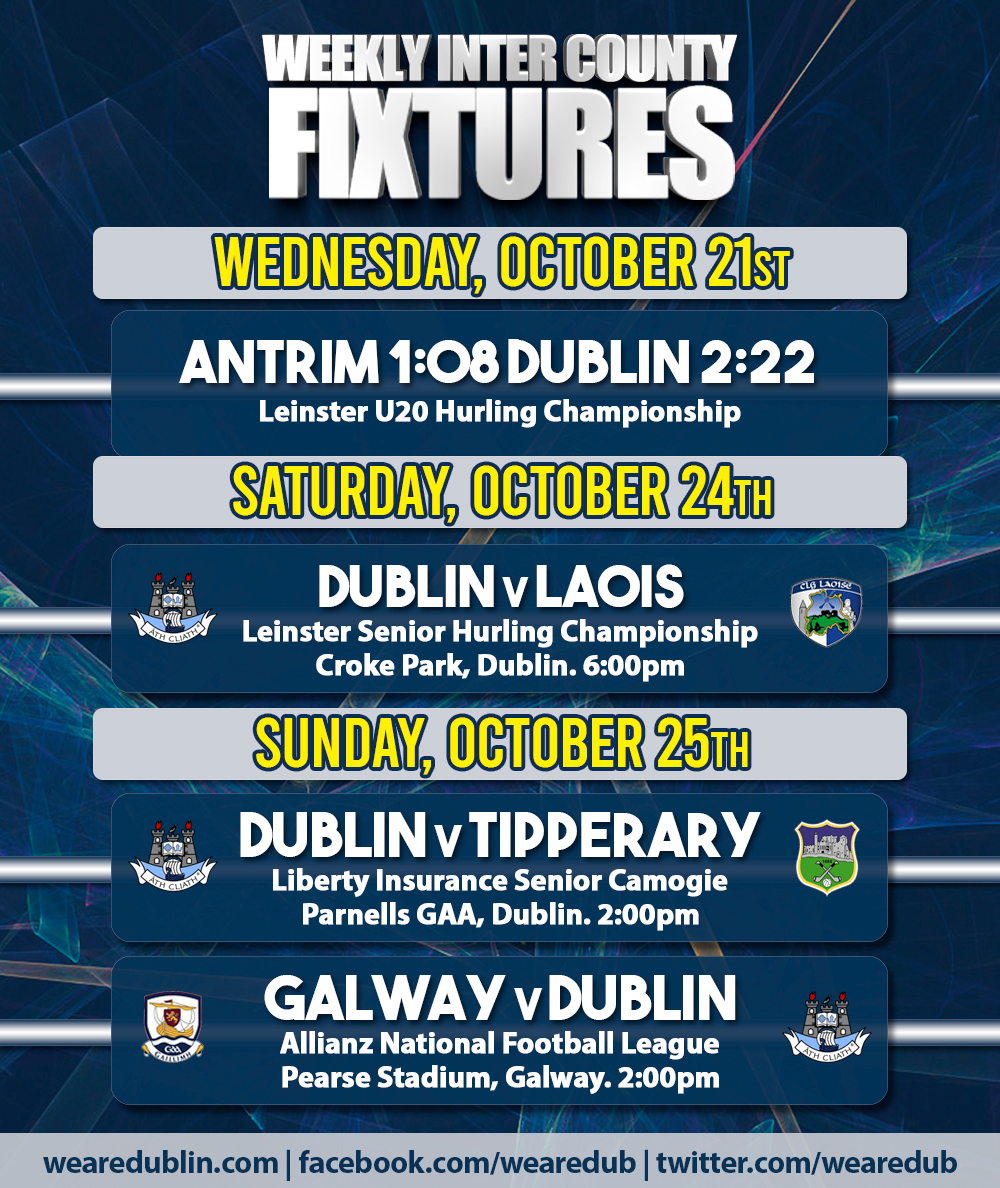 Well the news this week from the GAA that only Senior competitions wil continue for the next 6 weeks, while we traverse through the Level 5 COVID restrictions, leaves us with a lesser amount of games to enjoy this weekend than expected. But we’re grateful that we have some Inter County Fixtures to look forward to. Last night the U20 Hurlers got one last game in and recorded a victory over Antrim in their Leinster Championship. They now wait to find out of they’ll get to play their Quarter Final fixture against Offaly. But lets get onto what we have to enjoy this weekend.

It’s been a long wait but the Dublin Senior Hurling panel get back up and running this weekend. And its probably fitting that their opponents Laois were the team that ended Mattie Kenny’s All Ireland run last year at O’Moore Park. Dublin had come into the game off the back of a colossal win over Galway in the final round of the Leinster Championship. And were favourites to advance from the All Ireland qualifier. But the Joe McDonagh Cup winners had other ideas.

Like last year, Dublin have already met Laois twice, and won both meetings so far; in the Walsh Cup and National League campaign. So they won’t want lightening to strike twice as they head into a game that counts for so much more.

The winners of Saturday’s contest advance to play Kilkenny in the Leinster Semi Final on Saturday, October 31st in Croke Park.

Saturday’s behind closed doors game will be televised on Sky Sports for fans to watch.

The Dublin Senior Camogie panel have been waiting a long time to get started in what is a shorter All Ireland Championship. And with no provincial competition, and no end to their league campaign, it’s a dive straight into the action against a tricky opposition.

Tipperary come to Dublin on Sunday with a win already under their belts, as they’ve beaten Clare in their first of two games. A result this weekend will secure them a quarter final slot. But Dublin have a perfect opportunity to get one over on a team they fell foul to last year away from home. Dublin left The Ragg last year losing by 1-11 to 0-09. If the Dubs can secure a win on Sunday, it will make their final game against Clare a little less pressured.

We come into this weekend’s Senior Football game after a positive start last weekend. Dessie Farrell’s men witheld Meath in a Parnell Park home game with a 1-20 to 0-19 victory. And it puts them just one point behind league leaders Kerry in the table. Galway are level on points with Dublin, and there’s not much between them in score difference.

So Dublin will want their first trip on the road since March to be a successful one before they turn their attention to a potentially record breaking championship run.

Dublin looked comfortable last weekend, depsite some big purple patches from their opponents Meath. But they showed the calm and composure we’ve come to expect over the years, and confidence in the camp is high.

The game in Pearse Stadium will of course be behind closed doors, but will be broadcast on TG4.