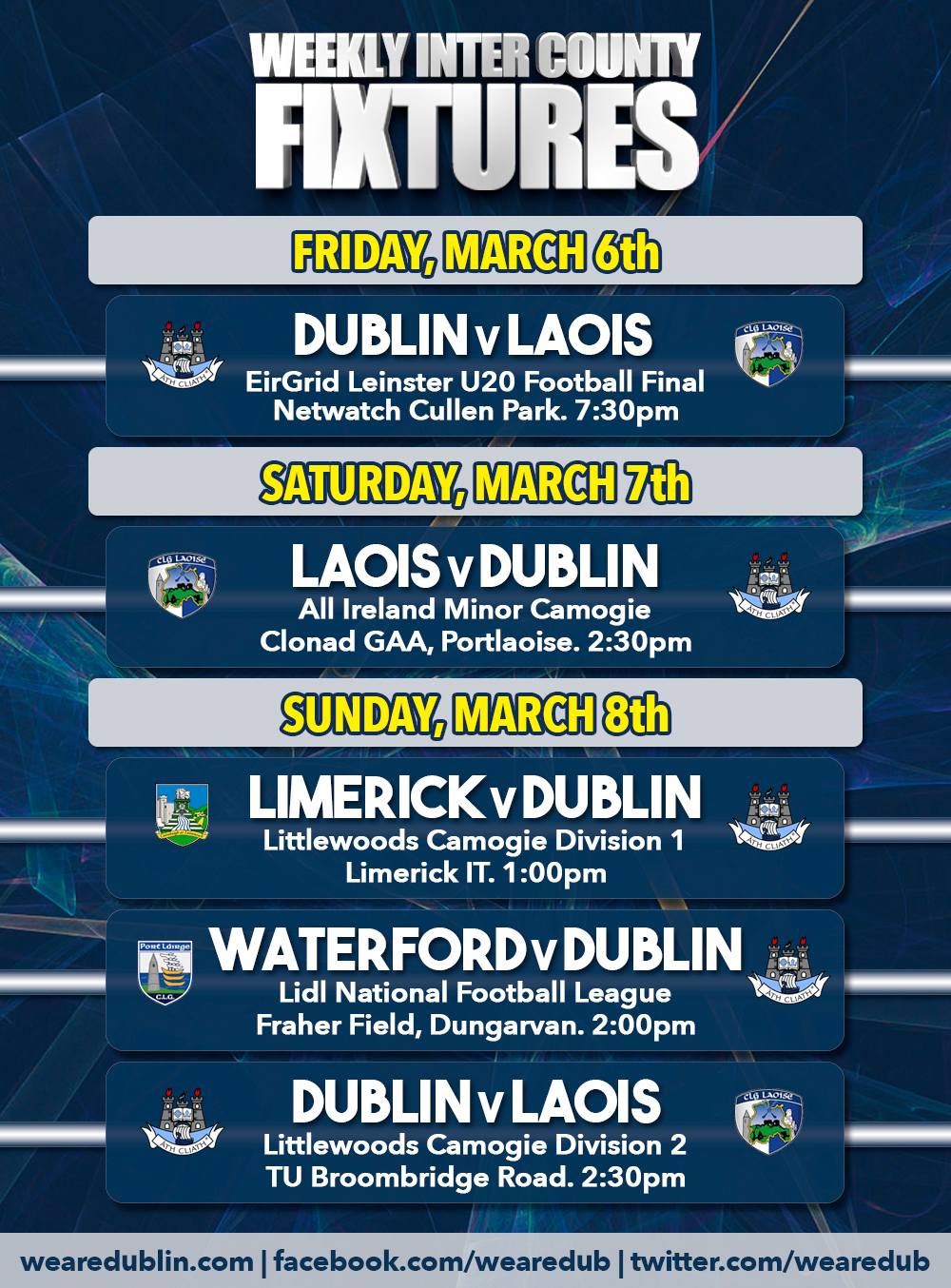 Despite the end of the Allianz Hurling League for Dublin and the Senior Footballers on a week break from their League campaign, there’s plenty of action to coming over the weekend. Even a championship final to enjoy. Here’s all the details for the weekly Inter County Fixtures this weekend.

Three games down and one to go as Dublin look to retain their Leinster U20 Football Crown. And a Friday evening trip to Netwatch Cullen Park is in store as they square off against Laois. Tom Gray’s men won’t look past this weekend, but they’ll certainly have one eye on the All Ireland Championship after losing to Cork last season.

Friday is a repeat of last year’s Leinster Final with Laois their opponents once again. The men from the O’Moore County entered the competition at the Quarter Final stage, beating Westmeath on home soil. They followed that with a win over Kildare. Dublin needed a qualifying win over Wicklow to set up their Quarter Final against Longford. And after seeing off Meath just under 2 weeks ago they will enter Friday’s game as favourites. But a tight contest is expected.

Still bouyed by their opening day victory over reigning Minor Champions Cork, Dublin will head for Clonad GAA on Saturday for their next All Ireland game against Laois. Scheduled to play Waterford in Round 2 the game was moved due to Waterford player’s involvement in club championships.

Laois suffered defeat to Wexford in their opening game and will be hoping that home advantage will play a role as the girls in blue arrive in Portlaoise. But a win for Dublin will continue that momentum before heading to Waterford next weekend.

Dublin’s Senior Camogie panel will feel disappointed with the outcome of their first two Division 1 games this year. A close call against Champions Galway on the opening day, when really they should have come away with at least a point. Not so clean cut in Round 2 as they suffered six point loss to Tipperary on the road.

Sunday will be a close game as Limerick too have lost their first two fixtures. Willy Braine and John Treacy would love nothing more than to finish the round robin phase on a high. Hopefully they’ll get the result they deserve.

Mick Bohan’s Senior Football panel head for Dungarvan this Sunday, level on points with opponents Waterford. With Donegal and Westmeath still to play the Dublin manager will be hoping for three wins from three games.

An opening round draw against Tipperary was followed with a hard grafted win over Mayo. But Cork squeezed a one point victory over them in Croke Park, and Galway were two goals the better in DCU in the last round. It’s now or never for the Seniors if they want to stay in the hunt for the League title.

Last weekend wasn’t for the feint hearted. And in absolutely shocking conditions, Dave Dunning Intermediate Camogie panel suffered a tough defeat to Tipperary. There can be an argument that in the midst of Storm Jorge, the game should never have been played. But that matters not now as they head into their final round game against Laois.

It’s their only game of the three that Dublin have home advantage and the All Weather surface at TU on Broombridge Road in Cabra will play host. Can Dublin finish the League campaign with a flourish. We’ll find out on Sunday.

DUBLIN RECEIVE SEVEN CAMOGIE ALL STAR NOMINATIONS AND FIRST EVER ALL...