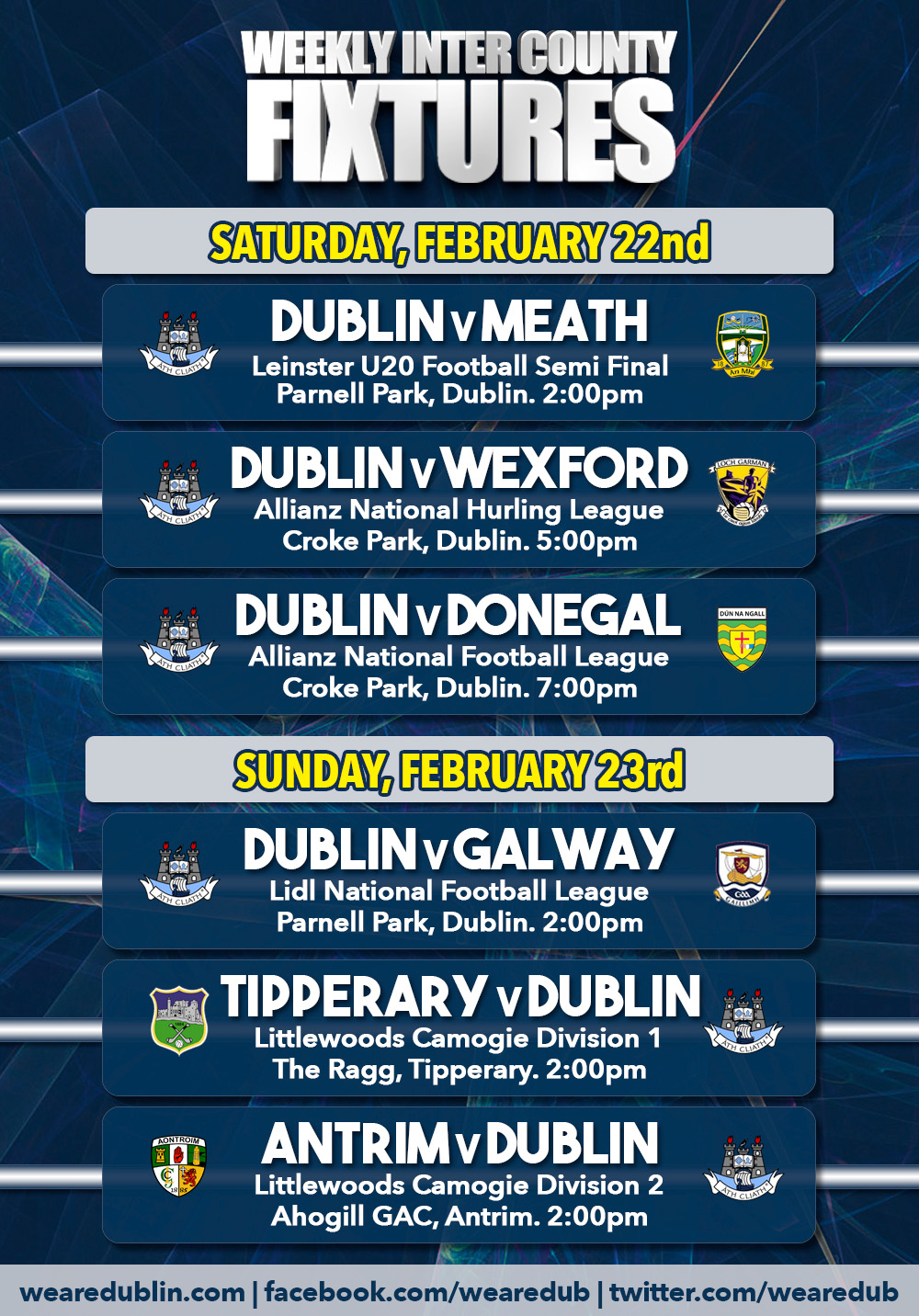 Having already seen off the challenge of Wicklow and Longford, Dublin’s U20 Footballers are still on course to retain their Leinster crown. And Saturday they face a side that have already beaten them this calendar year.

Meath were 2-13 to 2-11 winners over Dublin in the recent John Kerins U20 tournament. But this weekend the stakes are a lot higher. And in the recent quarter final, Dublin showed just how dominant they can be, with a ten point hammering of Longford.

This is expected to be a massive game in Parnell Park, and it remains to be seen if Tom Gray’s side can go on and retain their provincial crown.

The first of Saturday’s games in Croke Park sees Mattie Kenny’s Senior Hurlers take on a massive task against Wexford. Davy Fitzgerald’s side come on off the back of a victory over Kilkenny in the last round. And Dublin need points to secure qualification to the final stages of the competition.

After losing to Kilkenny in the opening round Dublin have rallied and appear to be growing in strength each game. Back to back victories over Laois and Carlow sees them level on points with both Wexford and Kilkenny, with Clare leading the pack in Group B.

If Dublin can upset the group and beat Wexford this Saturday, it will leave a very entertaining final round game against Clare.

With only one point seperating seven teams in Division 1 of the National Football League, one result could make all the difference. And Dublin go into this weekend the only side unbeaten so far.

Dessie Farrell’s men have fought out drawn games with both Kerry and Monaghan, with a 1-11 to 0-08 win over Mayo in Castlebar sandwiched between.

Donegal are one each in the won, drawn and lost columns and are only a point adrift of Dublin. They come into Saturday’s game off a one point defeat at the hands of Galway in the last round.

A win for Dublin would put a bit of breathing space between them and the teams below. And would be a massive boost ahead of a trip to Tyrone next weekend.

Mick Bohan’s Dublin Seniors sit mid table after three games. A drawn opener against Tipperary was followed by a win on the road in Mayo. But Dublin suffered defeat at the hands of Cork on their last outing, leaving them five points adrift of the league leaders.

Sunday is an opportunity to claw back some of that deficit as they welcome Galway to the capital. These sides met in last year’s All Ireland Final with Dublin capturing their third successive title.

Galway sit just below Cork in the League table and will come to Dublin looking to build on that. But Parnell Park can take it fortress label and turn advantage in Dublin’s favour as we’ve witnessed on many an occasion.

Willie Braine and John Treacy take their Senior Camogie panel on toad this Sunday. The Ragg will be the venue for their second League game. And after a very promising opener this could be a huge game for Dublin.

Despite losing to Galway in their league opener, the manner in which Dublin approached and attacked the game was something that was much needed in the squad, and the sense of disappointment after they ‘left the game behind’ shows a drive that we hope continues into this weekend and beyond.

Tipperary were one point winners over Limerick in Round 1 of the competition and win for them this weekend will secure a knock out slot. But we don’t see Dublin making it an easy out for them.

Agohill GAC is the destination for Dublin’s Intermediate Camogie Panel this weekend. Their first outing in this year’s Division 2 campaign as their opener against Tipperary was postponed.

So a new season awaits Dave Dunning and his panel. And a lot is expected of this group. The side had a difficult 2019 and found themselves in a relegation fight. But they survived and kept their Division 2 status.

There’s a lot of new faces again, but certainly a more positive feel amongst the group Dave has pulled together.

SEVEN OF THE BEST FROM DUBLIN AS THEY REACH LEINSTER FINAL