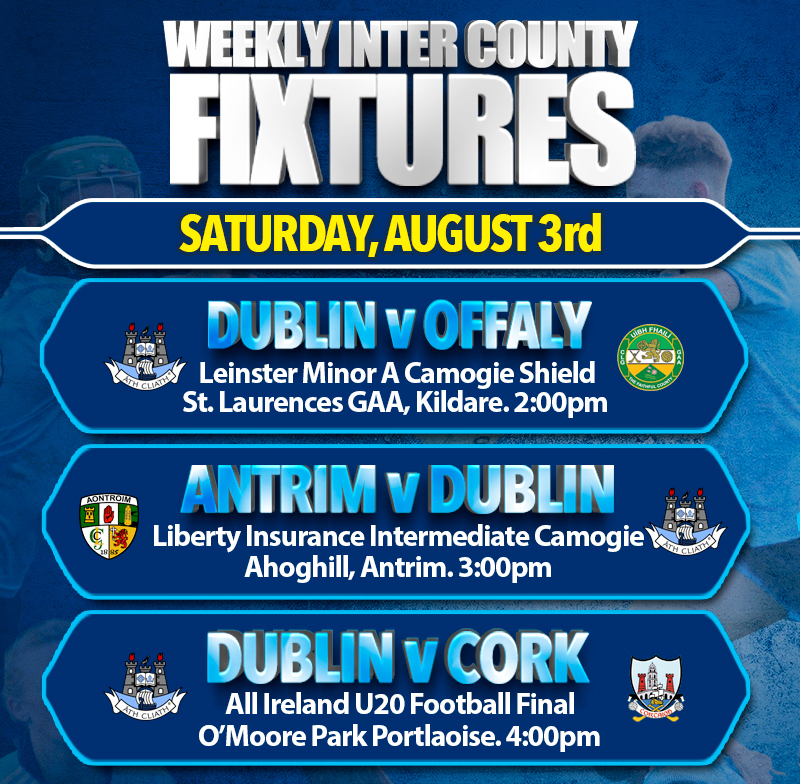 From a compact weekend of three games on Saturday we increase to five games this weekend. And with the bank holiday included we get to spread those five games over three day. Last weekend saw the Minor Footballers fall out of the All Ireland at the quarter final stage. But there was plenty of good news as both the U20 Footballers and Senior Ladies Footballers both registered important wins.

So this Saturday, Sunday, and Monday we’ll gave Leinster Camogie action, U20 and Senior Football action and the Senior Ladies will finish off the weekend with an All Ireland quarter final. That’s a good haul of Inter County Fixtures

Dublin’s U18 Camogie panel kick off the action this weekend with a trip to Kildare. And they have an opportunity of some silverware to end their season as they face Offaly in this year’s Leinster Shield Final.

With losses to both Wexford and Kilkenny Dublin found themselves alongside Offaly at the bottom of the group. Offaly’s fate was similar and as there was no need to play the final round game, they’ll instead face off for the Shield.

We wish Pat Martin and the U18’s the very best of luck on Saturday in their final game.

Dublin’s Intermediate Camogie panel, under the watchful eye of manager Dave Dunning also come to the end of their Championship this Saturday as they head north to face Antrim. It’s a game of no consequence for either side.

Despite Dublin only winning one of five games to date, that really doesn’t tell the story of the growth of this new group of players and their new manager. Dave Dunning had the challenge of rebuilding this side after they survived a relegation battle in the National League. And after finding the players, this is certainly a story that’s only in it’s infancy.

Throw in time in Ahoghill is 3:00pm

It’s a massive Saturday for Tom Gray and his U20 Football Panel. Already crowned Leinster Champions this year, they went one better beating Galway at the weekend. They expected it to be their toughest challenge, but the manner in which they controlled and won that All Ireland Semi Final was a thing of beauty.

Saturday they’re up against Cork and we could be in for a very tight game. But Dublin have been more than convincing since their Leinster opener against Longford, and they appear to have the momentum.

Come six o clock on Saturday there will be new U20 All Ireland Champions. Will it be Dublin? We’ll have to wait and see. 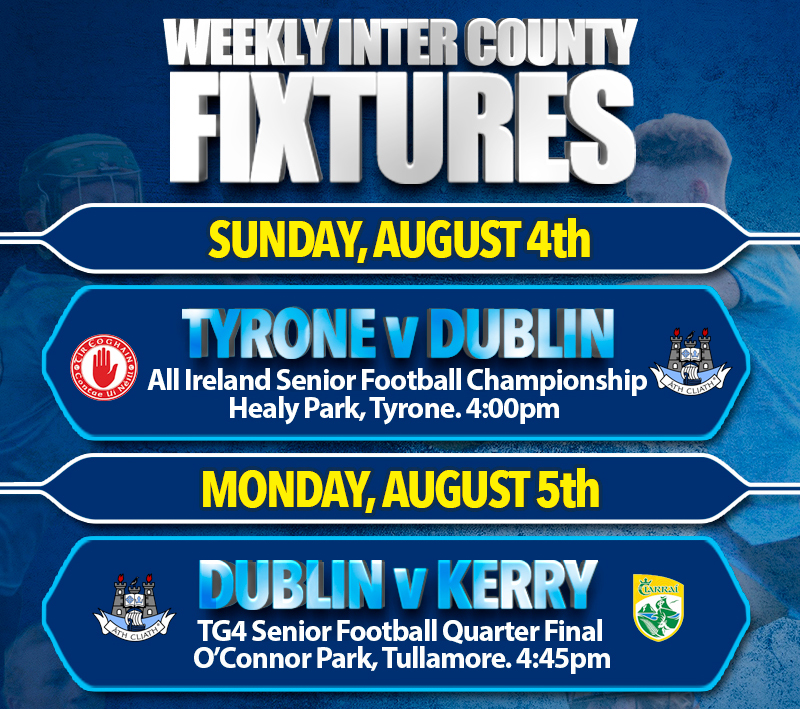 It’s the last of the Super 8 phases and the away leg for Dublin as they head for Omagh to add another chapter in their great rivalry with Tyrone. And who knows it may not be the last time they see each other, just like last year. it’s a battle for first and second in Group 2 of the Quarter Final Series. Obviously both sides will want to come out the winner.

Dublin beat Tyrone in the Super 8’s and of course the All Ireland Final last year. Tyrone drew first blood, beating Dublin by three points in their National League tie in Croke Park. But since the beginning of the Championship, Dublin again look like the in form team and won’t want to end their Championship unbeaten run. It was 2015 the last time Dublin have been beaten in the competition. And they’ll firmly focused on getting out of Healy Park.

Throw in is 4:00pm this Sunday

Mick Bphan’s Senior panel are still on course to capture their third TG4 Championship title in succession. And following last weekend’s victory over Monaghan, no one can really deny them. This bank holiday Monday they’ll come up against Kerry.

It’s a repeat of last year’s Quarter Final, with Dublin 3-19 to 1-07 winners on the day in Dr. Hyde Park in Roscommon. And they’ve chalked up some big score already in this year’s two games. A 5-15 to 2-06 win over Waterford got their campaign off to the perfect start. And with the 3-20 to 0-04 hammering of Monaghan, Dublin will be looking to get their teeth into a new challenge. It’s knock out time and anything can happen on the day. But Dublin will be ready and waiting for all challenges.

And that’s it. All the weekly Inter County Fixtures covered for another week.

Dublin Camogie Minor Team Secure Back To Back All Ireland Championship...