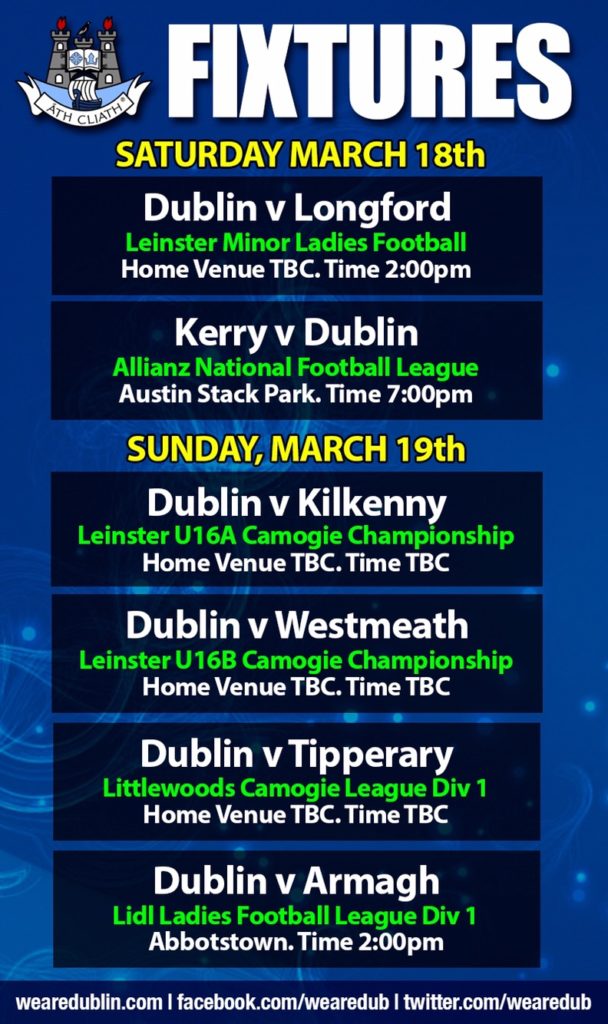 We’re heading for St. Patricks Weekend and of course we’re all hoping that Friday brings some celebrations to the capital as Cuala will battle it out for the AIB Senior Hurling Championship title in Croke Park.

﻿But the inter county action will get underway on Saturday with 2 massive games. The Dublin Minor Ladies Football panel will entertain Longford in this year’s Leinster Championship.

That evening, Austin Stack Park in Tralee will be the venue for the Allianz National Football League clash between Dublin and Kerry. Always a brilliant spectacle when these two teams go two to two. And there’s a certain unbeaten record still in the balance. Throw in time is 7:00pm.

The ladies take over Sunday with four games up for contention.

Both Dublin’s U16 Camogie panels are in Leinster action on home soil. The U16A team will face the power of Kilkenny and the U16B team will welcome Westmeath. Venues and times for both will be confirmed later.

Dublin’s senior Camogie panel will go again this weekend, still looking for that elusive first win in the Littlewoods Ireland Camogie League Division 1. They’ll face a tough challenge against Tipperary in their Round 4 clash.

Finally the Abbotstown campus will be he venue for the Dublin Senior Ladies Football panels Lidl National League encounter with Ulster Side Armagh. Throw in time is 2:00pm and this is expected to be a massive battle.

Six games, over two days. So much action to take in. Whether you’re traveling or staying in Dublin, make sure to take in a game and support the boys and girls in blue.