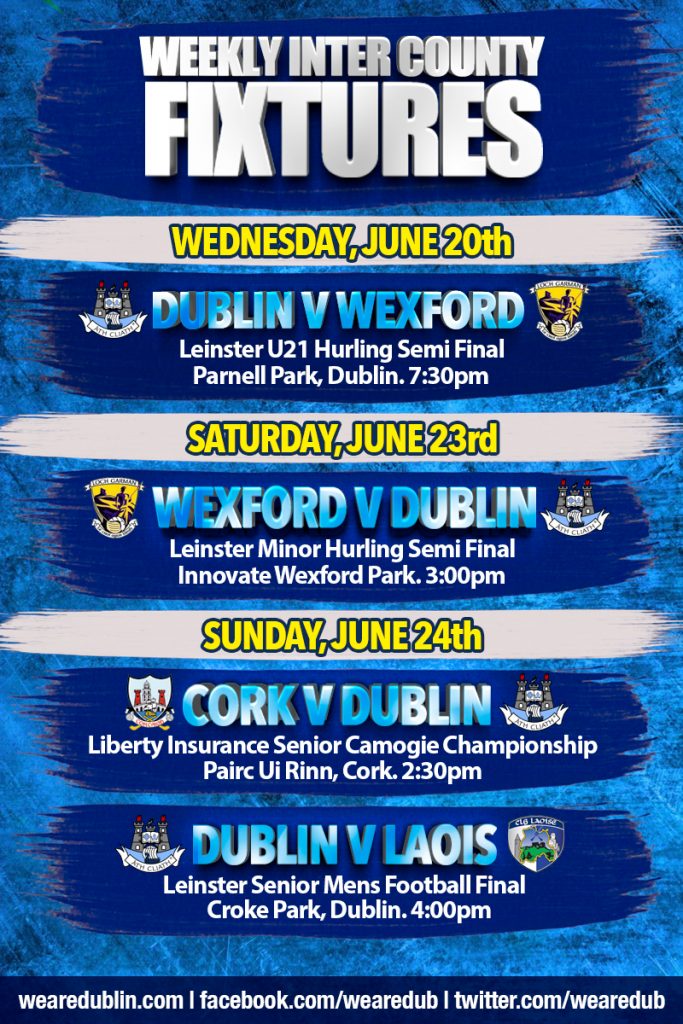 Well this weekend is certainly a massive week in Dublin Inter County action, with two Leinster Hurling semi finals, another round game in the Senior Camogie Championship, and of course this years Leinster Senior Football Final to finish out the week. Here’s everything you need to know.

There was only a goal between the sides last week, but a goal was enough to see Dublin’s U21 Hurlers beat Westmeath 2-13 to 1-13. to put them through to this week’s Semi Final against Wexford, and the Dubs will be buoyed by playing this important game on home soil in Parnell Park. Dublin will hopefully still have some momentum from their three wins so far as Wexford come in as automatic semi final contenders. A win for the Dubs will see them face the winners of the Galway v Kilkenny Semi Final on July 4th. Throw in is 7:30pm this Wednesday in Parnell Park.

Following in the footsteps of their U21 counterparts, Dublin’s Minor hurlers only lost their opening championship game against Kilkenny, and went onto to beat Laois and Wexford in their final two round games. Their Quarter Final win against Antrim was a very comfortable affair, leaving them face Wexford again for a place in this year’s final. In their Round 3 clash there was only 0-03 between at the final whistle, and with home advantage to Wexford this time around, anything can happen. Throw in at Innovate Wexford Park on Saturday afternoon is 3:00pm

David Herity’s Senior Camogie panel celebrated a more than convincing Round 1 win over Offaly at the beginning of this competition, and they now face three away games on the bounce, with the first stop on the tour at Senior Champions Cork this Sunday. The mood in the camp is a very positive one and the Dubs will feel they can steel a result in Pairc Ui Rinn. Dublin reached the Semi Finals of last year’s Championship and anything less than that this time around the girls will be utterly disappointed. Throw in on Sunday is 2:30pm

Always regarded as the first big hurdle in the Championship, Dublin Senior footballers will look to win their eight provincial title in succession this Sunday afternoon in Croke Park, with Laois standing in their way. The last time the O’Moore County reached the Leinster Final was 2007, and on that day they faced Dublin, who were the victors on a score of 3-14 to 1-14. Dublin have already made light work of Wicklow and Longford to reach the weekend’s fixture, while Laois have gone the full route, beating Wexford, Westmeath and Carlow. Throw in is 4:00pm in Croke Park.

There’s plenty there for everyone to enjoy. Make sure the jerseys are washed and ready for action.