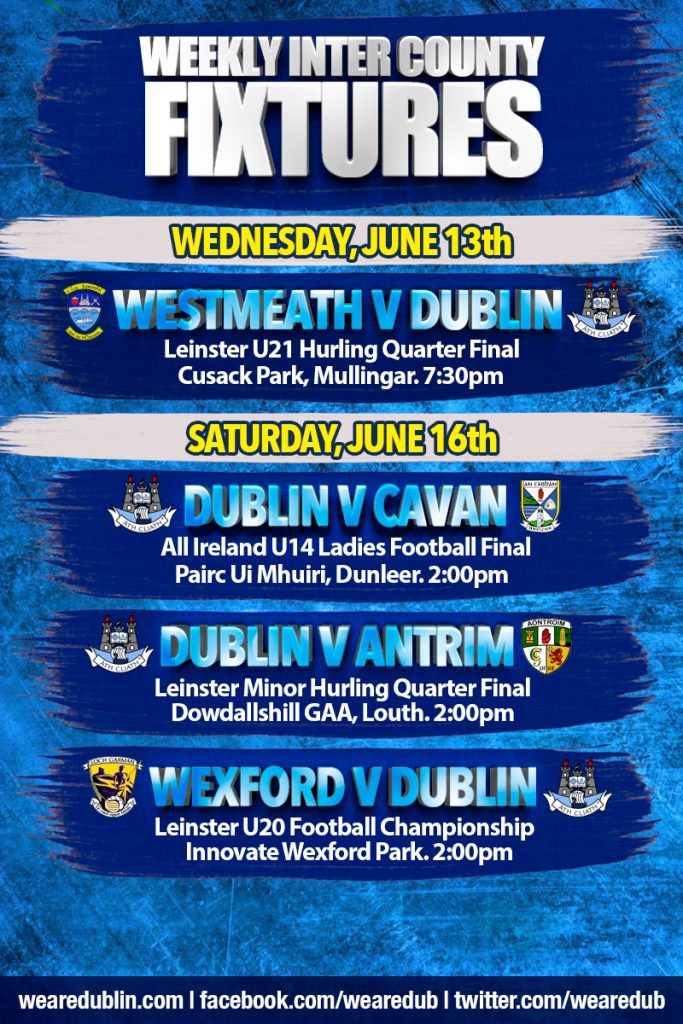 Details of all this week’s Dublin Inter County Fixtures

What a weekend we had with some great results for Dublin inter county teams. And the action continues this week with some more games to take in.

Following wins over Laois and Carlow so far in the competition, Dublin’s U21 Hurlers have advanced to the Quarter Finals and this Wednesday, June 13th, they’ll face Westmeath in Cusack Park. A semi final place is at stake with the winners meeting Wexford. Throw in is 7:30pm in Mullingar.

All Ireland U14 Ladies Football Final

Dublin’s U14 Ladies Football panel will make the trip to Dunleer this Saturday afternoon to contest the All Ireland Final at this grade as they take on Cavan. This is Dublin’s first All Ireland at this grade since 2011 and we’re all hoping for a positive result. The girls in blue beat Kerry by 3-11 to 3-05 in the competition’s Semi Final and will be well up for this game. Throw in at Pairc Ui Mhuiri on Saturday is 2:00pm

With two wins from three in the round robin stage of this year’s competition, Dublin’s Minor hurlers finished second in Tier 1 behind Kilkenny. Saturday they’ll meet Antrim in the Quarter Finals with hopes of staying in the competition for a while longer. Dowdallshill GAA is teh venue with 2:00pm as the throw in time.

With Dublin already beating Longford and Westmeath so far in this new competition, The U20 Football panel will travel to face Wexford this Saturday for the last of three rounds. A win will see them top the group and advance straight to the Semi Finals, but even if Wexford win they can still qualify for the Quarter Finals. Throw in at Innovate Wexford Park is 2:00pm

And that’s this week covered. Four games across Football, Hurling and Ladies Football. Make sure to get out and support Dublin’s Inter County teams.

McMAHON LAUNCHES ‘HALFTIMETALK’ WITH THE HELP OF DCU AND THE LORD...

DUBLIN U17 STARTING 15 FOR LEINSTER FINAL CLASH WITH MEATH