All your fixtures right here for this week. 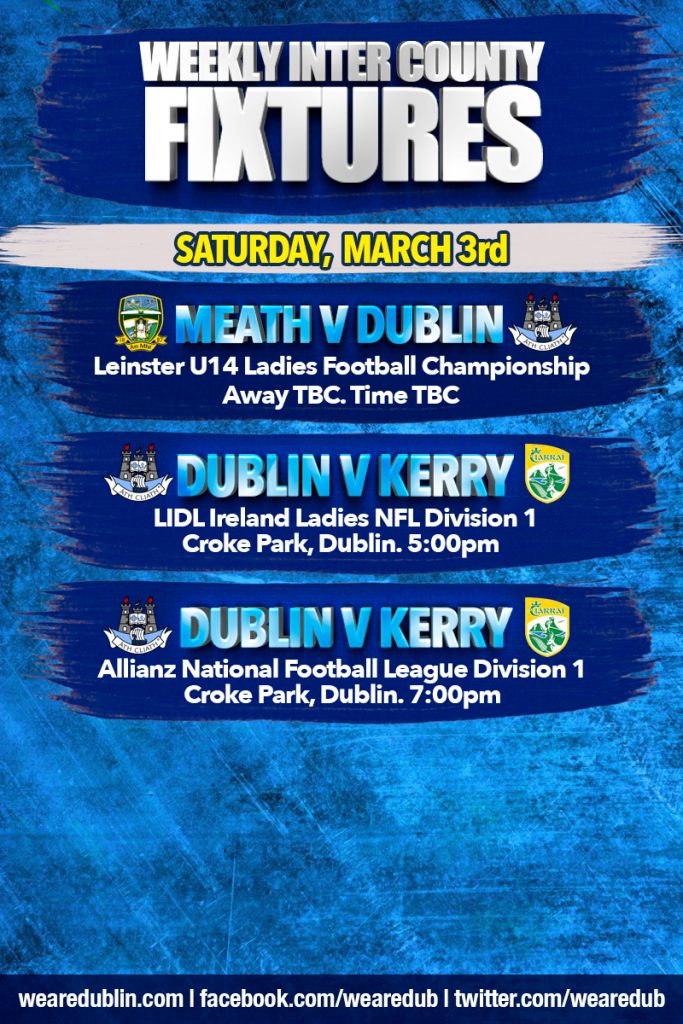 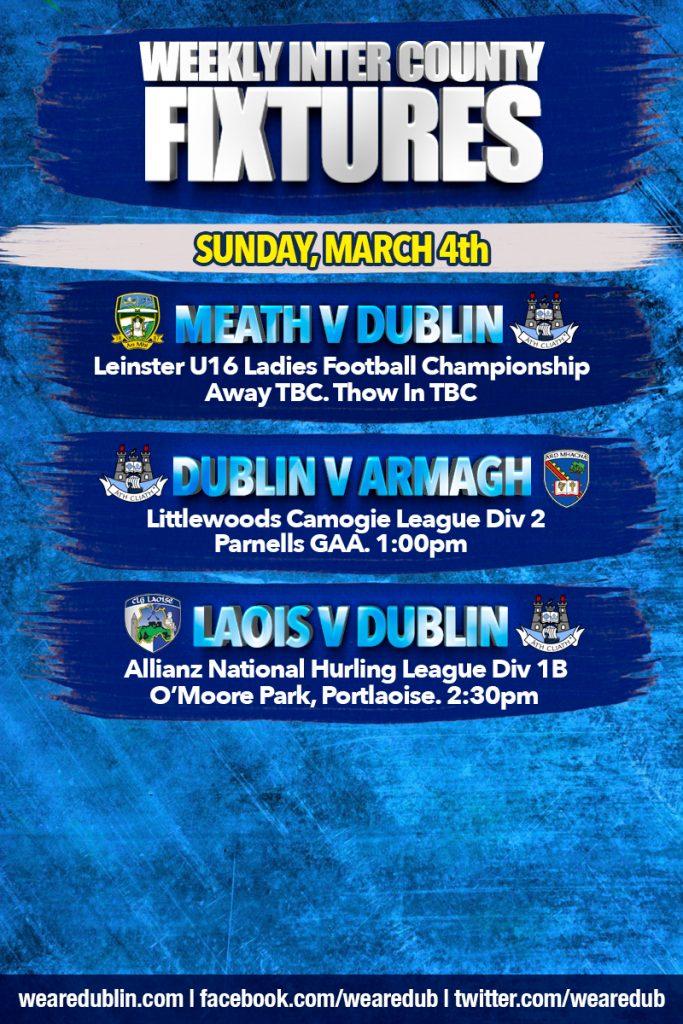 What a weekend we’ve just had. Great to see so many in Castlebar on Saturday in support of both the Ladies and Men’s Senior Football panels. And some great results across the board.

This weekend we’ve six games over Saturday and Sunday, with another Spring Series Double header to enjoy.

Saturday will see the start of this year’s Leinster U14 Ladies Football Championship, and the opening round is a repeat of last year’s provincial final with reigning champions Dublin taking on rivals Meath. This is an away game for Dublin with venue and throw in time to be confirmed shortly.

Then it’s over to Croke Park for Spring Series Double header with both the Senior Ladies and Senior Men’s footballers in action against Kerry. Mick Bohan’s panel will start proceedings at 5:00pm against Kerry following their fourth consecutive league win against Mayo at the weekend. Dublin beat Kerry on the road last year by 1-08 to 0-08 and will be hoping to maintain their unbeaten run.

At 7:00pm it the rekindling of yet another rivalry as Jim Gavin’s Dublin face Eamon Fitzmaurice’s League winning Kerry side for hopefully another memorable clash. Kerry beat Dublin in last year’s final by one score, while their round game in Tralee ended in a draw. Who know’s what kind of Kerry side will run out on Saturday night but we’re almost guaranteed another classic.

More Leinster Ladies Football action on Sunday, and like the U14’s games, this game is a repeat of last year’s U16 Leinster Final. Dublin and Meath square off again. The girls in blue were dominant winners of this competition last year, beating Meath on the opening day and in the provincial final. We’ll be expecting more of the same. It’s another away trip with venue and throw in time to be confirmed.

The Dublin Premier Junior Camogie Panel are two for two in their first year in Division 2, and this Sunday they’ll face an old foe in Armagh. It was 2016 when these two teams last met in the National League with Armagh winning twice, in both the first round and the Semi Finals. But a year is a long time in Camogie and this is sure to be a massive clash between these two sides. As always Parnells GAA Club will act as home turf for Dublin and 1:00pm is the throw in time for this game.

Finally, Dublin’s Senior Hurlers make their way to Portlaoise for the final round game in this year’s Allianz National Hurling League campaign. A win over Laois will give them the chance of a quarter final spot, but a loss will see them play off against Antrim in a relagation play off for safety. It’s a 2:30pm throw in at O’Moore Park and a must win game for Dublin.

There you have it. Six games over two days, all four codes covered. Get out and enjoy as much of it as you can.