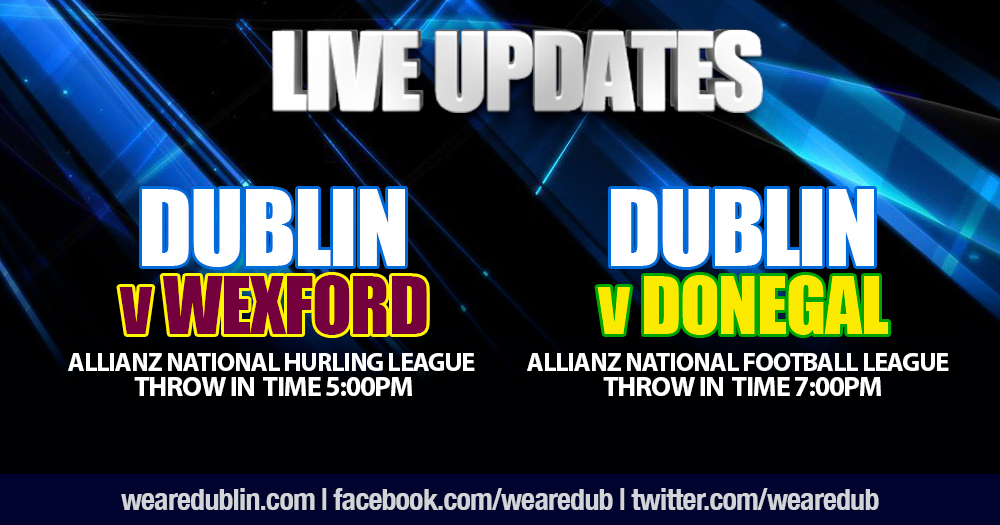 Since suffering a heavy defeat on the opening weekend, Dublin have registered two victories, but Mattie Kenny will know that a tough test awaits at the Jones Road venue tonight.

Wexford summoned a brave and purposeful finish to overcome Kilkenny on home soil. The attitude and application bodes well for Wexford, who are also extending the playing options available to Davy Fitzgerald and his selectors.

With sides sitting on four league points, two wins and one loss each, tonight could be the turning point for either team. Dublin will need to go to leaders Clare in the final round, with Wexford welcoming Carlow.

From 5:00pm we’ll have all the action in what promises to be a titanic hurling battle.

It’s all to play for in Division 1 of the National Football League. And one slip up could change the layout of the table. Dublin are unbeaten but share the top spot with Tyron and Galway, who meet tomorrow.

Donegal can still make the knock out stages but after tonight still have Monaghan, Tyrone and Kerry to play. Dublin head for Tyrone after tonight’s game, with Meath and Galway as their final two opponents.

Donegal are still the last team to beat Dublin in a Championship encounter, but 2007 was the last time they won a league game against the Dubs.

Can Dessie Farrell take his unbeaten run in the league to four games? We’ll find out from 7:00pm

We’ll be live from the first Spring Series throw in at 5:00pm in Croke Park, with score by score updates for both games on www.twitter.com/wearedub. And you can find all the post match reports and analysis from the game right here and on www.facebook.com/wearedub.

CLARKE EXPECTS SCULLY AND MCHUGH TO CHALLENGE FOR SENIOR PLACES