All you Bank Holiday Weekend Fixture information below, and click here for all fixtures info 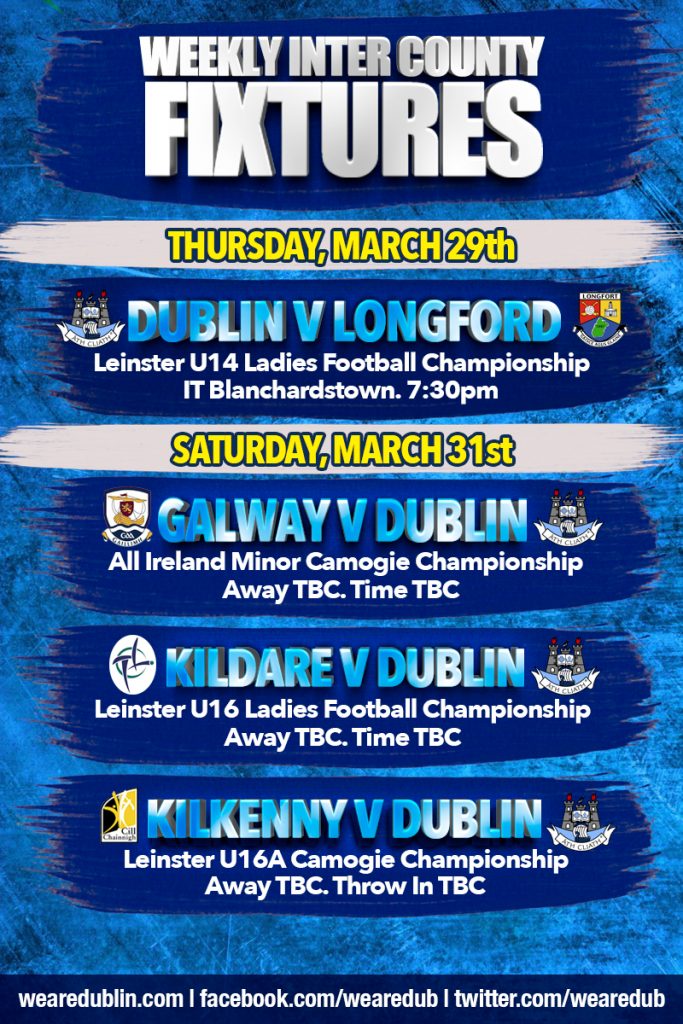 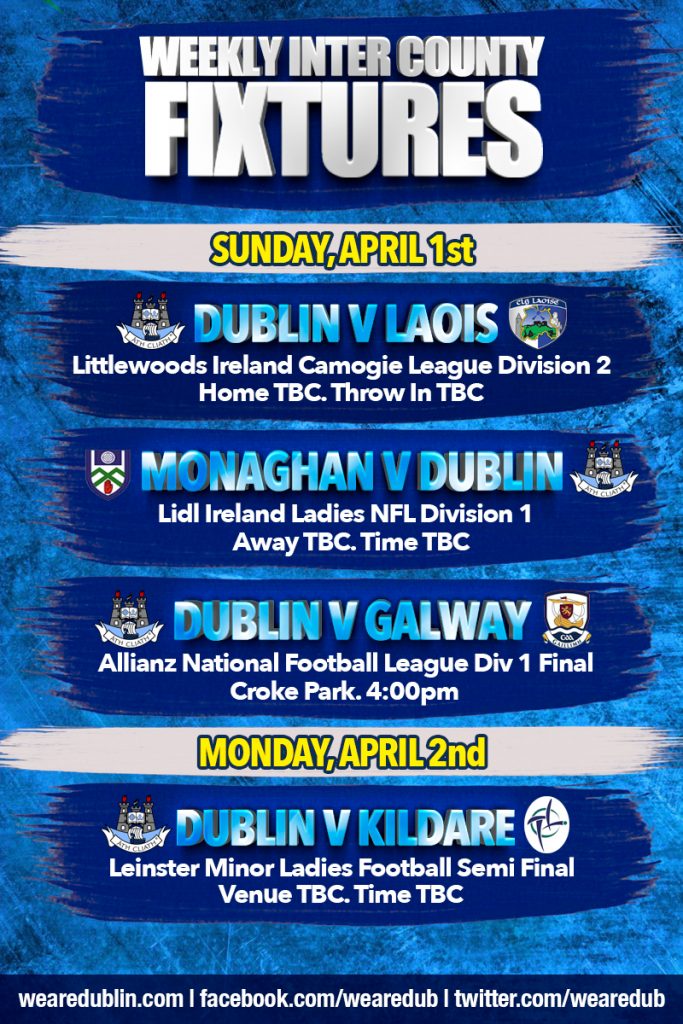 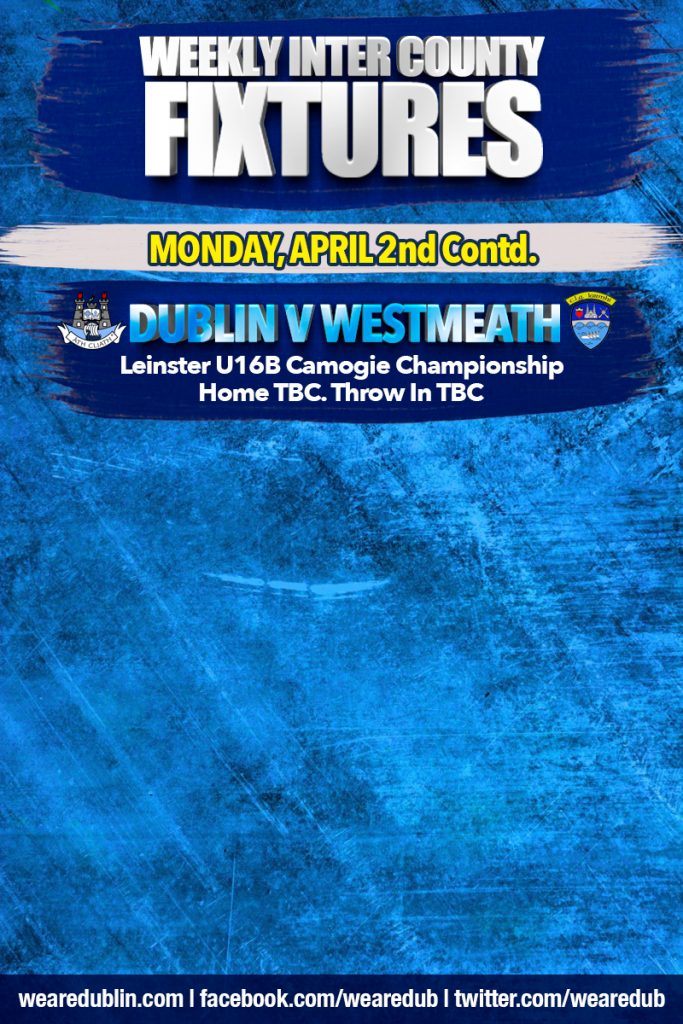 What a weekend! And a busy one too. Cuala climbed the mountain once again and we had wins for the Ladies U14 and Minor panels, wins for both of Dublin’s U16 Camogie panels and a draw for the Premier Junior Camogie team. Commiserations to both Dublin Senior Hurlers and Footballers and the Senior Ladies panel.

So, it’s the Bank Holiday Weekend, which means even more games to get stuck in to.

Starting this Thursday evening, Dublin’s U14 Ladies Football Panel as they face Longford in the next round of the Leinster Championship. the girls in blue had a tight win over Kildare this weekend, with Longford losing to Meath. IT Blanchardstown will host this game at 7:30pm

Onto Saturday and there’s a good mix of Ladies Football and Camogie. Dublin’s U16 Ladies Football Panel will kick off their Leinster Championship with a road trip to Kildare. The start of this competition got put on hold during the recent bad weather so the girls are ready to go. Venue and throw in time to be confirmed later.

The Dublin Minor Camogie panel will play out their final round game in this year’s All Ireland Championship with an away trip to Galway. The team haven;t looked back since their opening day loss to Cork and have beaten both Wexford and Kilkenny. Galway have lost two of their three games so far so there’s vital points up for grabs in this one. Venue and Throw in time again to be confirmed.

Lastly for Saturday, Dublin and Kilkenny will square off in the Leinster U16A Camogie Championship. Both sides were victorious in Round 1, beating Wexford and Offaly respectively, so this is sure to be a brilliant match. This is an away game for Dublin with Venue and Throw in time to be confirmed.

Sunday we’ve another three games to look forward to. Our unbeaten Premier Junior Camogie Panel will welcome Laois to home soil for their fifth game of the competition. Dublin have drawn the last two fixtures against Kilkenny and Derry so will be looking to get some extra point from this one. Venue and Throw in time, again, to be confirmed.

Mick Bohan’s Senior Ladies Football panel will make the trip up north to the Farney County to face Monaghan in Round 7 of the Lidl National League. The girls will have been disappointed with the weekend’s loss to Galway but will hope to bounce back and remain top of the table with Cork. Venue and throw in time still to be confirmed by the LGFA.

Then at 4:00pm in Croke Park, Dublin’s Senior Footballers will be looking to get their hands back on the Allianz NFL Division 1 crown as they face Galway in this year’s Final. The Dubs suffered their first competitive defeat to Monaghan at the weekend, which saw them unbeaten for almost a year in League and Championship action. Galway put the boys in blue to the test in Salthill a couple of weeks ago so this will hopefully be a great contest.

And finally it’s onto Bank Holiday Monday with two more games to give you details on.

Dublin’s U16B Camogie Panel will entertain Westmeath in the Leinster Championship. Both sides are two for two in the group and this is the final game to decide who tops the group. This is a home tie with venue and time to be decided.

Finally, after their Quarter Final victory over Laois at the weekend, Dublin’s Minor Ladies panel will face Kildare in this year’s Leinster Semi Final. Dublin are only a game away from reaching another Minor Championship Final. Detail regarding the venue and throw in time will be announced later this week.

Well that’s it. Nine games from Thursday to Monday. There’s definitely something for everyone. Get out and show your support as much as you can over the Easter.

Early Goals Set Tipperary Up For Victory Over Dublin

DCU’s Hannah Hegarty One To Watch During Ashbourne Cup Weekend