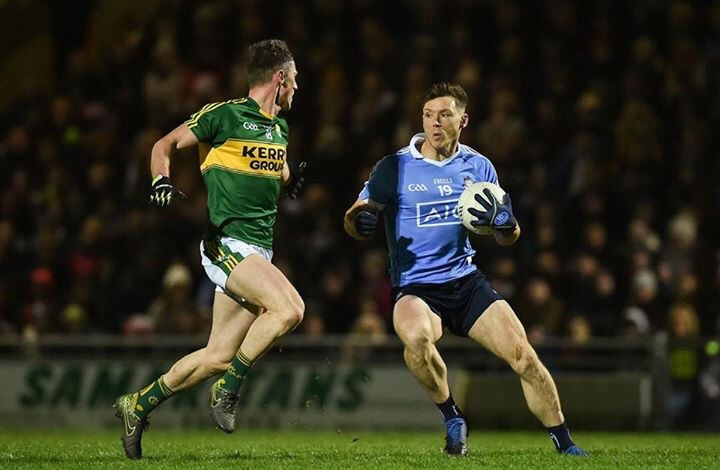 A Paul Mannion point in injury time earned Dublin a draw tonight against Kerry in Tralee and in turn equaled the long standing unbeaten record of 34 games held by the Kerry team of the late 20’s and early 30’s.

It wasn’t a game for the purist not helped by the tactics of Kerry throughout as they resorted to symptomatic fouling during play and off the ball.

The first half particularly suffered from those tactics as it was very fragmented because of the amount of stoppages and bookings.

Kerry will believe those tactics worked as it disrupted Dublin’s normal rhythm in the first half. Dublin seemed a little off the intensity levels of their hosts in the opening twenty minutes of the game.

Macauley and Fenton unstoppable the last day out weren’t at the races today and that allowed Kerry to have a good platform to attack from centerfield. Points from Crowley and Geaney gave Kerry a two point lead by the 10th minute.

Dublin only managed one point in the opening 25 minutes, that came from a Dean Rock free in the 12 minute. With five minutes to the break Kerry were leading by 0-04 to 0-02, but three Dean Rock frees in a row gave Dublin surprisingly with how poorly they had played, a one point lead.

Just before the break Paul Geaney broke through the Dubs defence and the goal opened up in front of him, but Stephen Cluxton stood tall and tipped Geaney’s goal attempt over the bar and the sides headed to the dressing rooms tied at 0-05 apiece.

Jim Gavin brought on Cian O’Sullivan for the second half but it was Kerry that had the better of the opening ten minutes of the second period and hit four unanswered points from Geaney with two, one from a free, Moran and Kevin McCarthy.

Gavin reacted by bringing on Flynn and McManamon for Macauley and Scully. Both made an immediate impact and Dublin got there first score of the second half in the 49th minute from a Rock free.

Two minutes later and some last ditch defending from Kerry stopped a certain Dublin goal, a Connor McHugh shot was saved by Brendan Kealy, two follow up attempts were blocked on the line but the Dubs were awarded a free which Dean Rock dispatched over the bar.

O’Gara and Mannion were introduced to the game with Dublin now on top and driving at the Kerry defence. Conor McHugh put the bare minimum between the sides with a good point and with 15 minutes to play the game was all square as O’Gara split the sticks with a fine effort.

That gave Kerry a lift and they made hay hitting two excellent points from Barry John Keane and Donnchadh Walsh and Dublin’s proud unbeaten record looked like it was on the chopping block with only the axe left to fall.

But Gavin’s team have been here before and one of their greatest assets is their ability to somehow find a way to get a result. And once again they did, with game in injury time Dean Rock slotted over yet another free to bring his tally to 0-09.

Kerry won the resultant kick out and were awarded a free, but they made a mess of it and McManamon snapped up the loose play, hit a pass into Paul Mannion who slotted the ball nonchalantly over the bar for the equaliser.

Dublin finished the final seconds of the game with 14 men as Ciaran Kilkenny took one for the team and received a second yellow card.

It was nervy at times, definitely tetchy throughout but Dublin roll on and next week have the opportunity to break the record when they take on Roscommon in Croke Park next Saturday night.