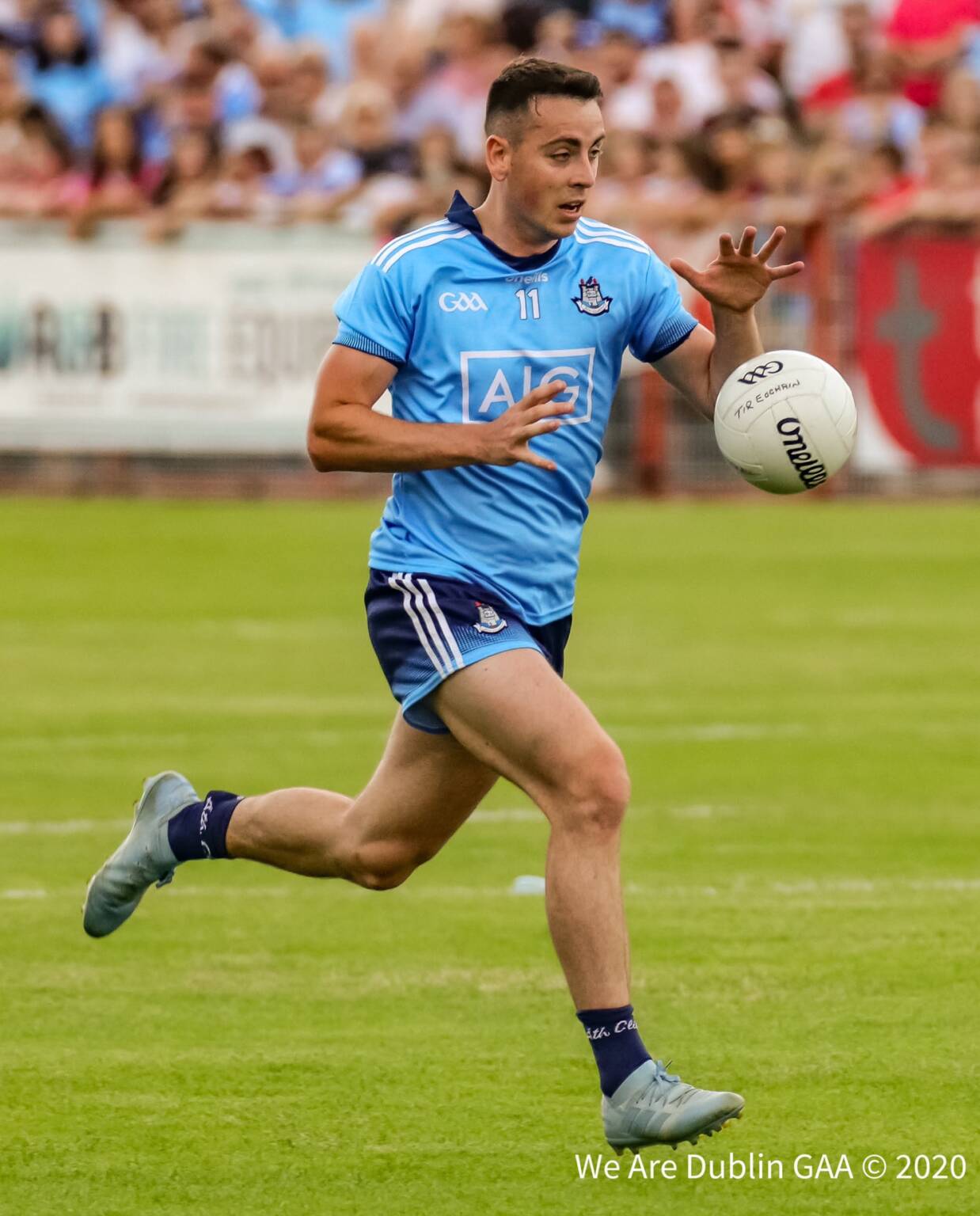 Dublin cruised into the 2020 Leinster final with a easy routine win over Laois this afternoon in an quite and empty Croke Park.

Dessie Farrell will have learned very little from a game his side barely had to shift out of second gear to win, but he will be pleased with the performances of Brian Fenton, Tom Lahiff, Niall Scully, Ciaran Kilkenny, Sean Bugler and second half substitute Cormac Costello who finished with 0-07 to his name.

The winning margin could have been wider but for Laois goalkeeper Niall Corbet who pulled off three excellent saves from goal attempts by Brian Fenton, Niall Scully and John Small.

Although Corbet was also at fault for a couple of Dublin points, the Laois net-minder was too fond of joining the play outfield carrying the ball out to his own 45’ or midfield area on numerous occasions, but he turned over possessions a couple of times with Dublin taking advantage to knock over a couple of points.

Brian Fenton go the scoring up and running in the first minute with a point in the Davin Stand end and two minutes later he was on the end of a sweeping Dublin move but his goal attempt was pushed wide by Niall Corbet for a 45’ which Dean Rock dispatched.

Laois grabbed their first score of the game in the sixth minute with a point from Gary Walsh. Three minutes Dublin stretched their lead with a converted free from Dean Rock.

Moments later and the O’Moore County were thankful to their keeper again as he saved a goal effort from Niall Scully who impressed throughout.

Paul Kingston reduced the deficit with a fine point in the tenth minute and then the game hit a scoring drought which lasted until the 23rd minute of the half.

The Laois keeper on one of his many upfield forays lost the ball around the middle and the ball was worked into Ciaran Kilkenny to slot over his first of the day.

Com O’Callaghan won the subsequent kick-out, passed the ball inside to Scully who in turn fed the onrushing James McCarthy who moved the ball onto Fenton who found Sean Bugler with a perfect pass and the St Oliver Plunkett Eoghan Ruadh man buried the ball to the bottom right hand corner of the net.

Ciaran Kilkenny, Niall Scully and Paddy Small added points before the break to leave Dublin in a commanding position at half-time with the score 1-07 to 0-02.

Laois scored the opening score of the second half with an Evan O’Carroll pointed free just after the restart. That was quickly cancelled out with a sublime point from Kilkenny.

Five minutes into the second half and the game was completely finished as a contest. Dublin worked the ball down the right to James McCarthy and his clever hand pass put Ciaran Kilkenny through on goal, the Castleknock clubman didn’t bother to gather the ball but instead caught it on the volley and blasted it past Niall Corbet into the bottom left hand corner of the net.

Dublin won the restart and the unplayable Brian Fenton metronomically slotted the ball over the bar. A Laois free in the 42nd minute was converted by Gary Walsh as Laois continued to live off scraps upfront.

Another point from Fenton was quickly replied with a fine effort from Paul Kingston with twenty four minutes left on the clock.

Cormac Costello was introduced and the Whitehall Colmcille clubman made a telling contribution to the finish which Dublin dominated.

Dessie Farrell’s side hit four points on the trot to all but disappear over the horizon, a Con O’Callaghan shot at goal was was deflected over the bar by the legs of Corbet in the Laois goal.

Cormac Costello caught an excellent forward mark and dispatched it over the for his first point. Brian Fenton knocked over his fourth of the game and half-back Robbie McDaid broke forward to get his name among the scorers.

In fairness to Laois they never let the heads drop and continued to push forward, Brian Byrne grabbed his sides sixth point with fourteen minutes left in the game.

Cormac Costello continued to give Dessie Farrell food for thought ahead of next weeks Leinster final with another fine point from play and a moments later the evergreen Ross Munnelly scored his sides seventh and final score of this semi final from a free.

Dublin piled on the scores in the final eight and a bit minutes with one from Ciaran Kilkenny, a brace from Niall Scully and five from Cormac Costello, three from frees, one from a 45’ and one from open play to secure a twenty two point win and a place in the 2020 Leinster Final.

Next Saturday the 2020 Leinster Final will be contested by Dublin and old Leinster foes Meath who beat Kildare today.