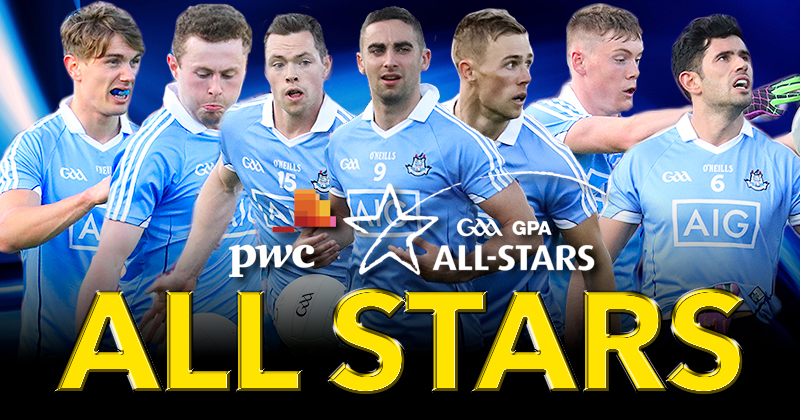 This evening the GAA and GPA, in association with Price Waterhouse Cooper, handed out this year All Star Awards in Football and Hurling, along with the coveted Player and Young Player Of the Year gongs.

All Ireland Champions Dublin took the line share of the fifteen spots with seven awards. Championship runners up Mayo received six places, with Tyrone and Kerry making up the remaining two places.

Michael Fitzsimons was named All Star at full-back on the team with Cian O’Sullivan ahead of him at centre-back and Jack McCaffrey, who went off injured early in the final win over Mayo, in at left half-back.

James McCarthy was a never a doubt, taking one of the midfield spots.

Dean Rock, who scored the winning free at the end of the All-Ireland was awarded one of the wing-forward slot, with 21-year-old Con O’Callaghan winning his first All Star on the opposite side. And Paul Mannion took his well earned and well deserved spot in the full forward line.

And if it wasn’t enough for Con O’Callaghan to capture his first All Star Award tonight, he also took home the coveted GAA/GPA Young Footballer Of The Year Award, capping off an amazing year for the young Cuala club man.

So, here are the GAA/GPA All Star Football Team For 2017

Congratulations to all the award recipients tonight.

FITZSIMONS TAKING NOTHING FOR GRANTED