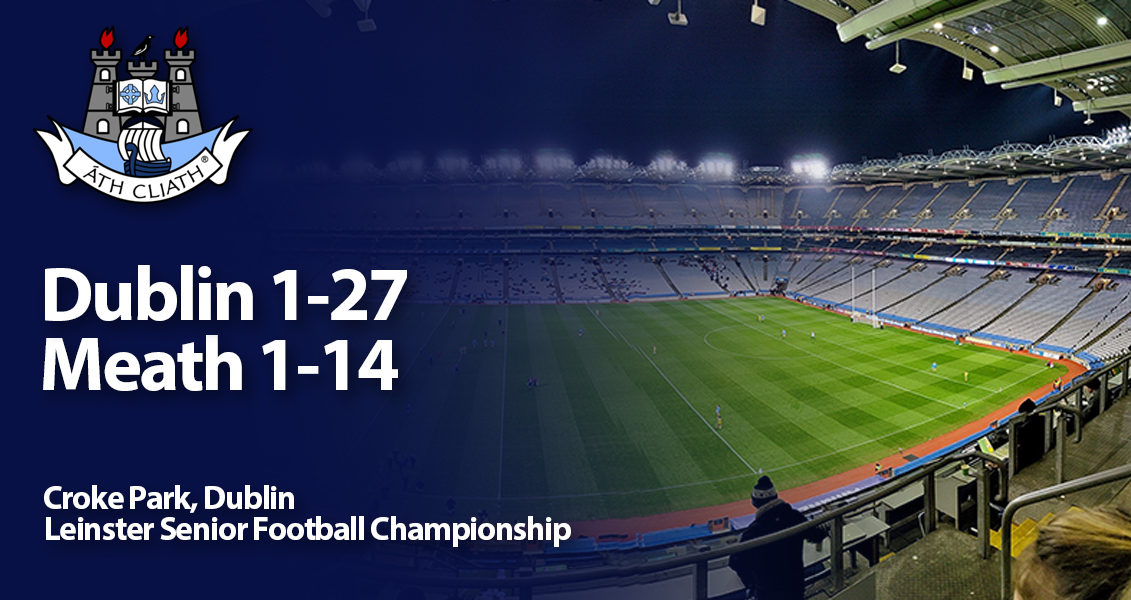 Dessie Farrell’s Dublin Senior Football Panel now have their eye on a 12th consecutive Leinster Championship, as they eased past Meath this afternoon in Croke Park. And the signs of regression witnessed during the league competition slowly disappear more with each Championship game.

Kildare will pose as worthy opponents in 2 weeks time but based on Dublin’s two performances in this competition, it will be a difficult task.

Following up on their 23 point victory over Wexford, Dublin put today’s tie against Meath to bed early. And Meath lost their discipline in the closing stages of the game with Jack Flynn and Jordan Morries both receiving their marching orders. Dublin lead by 15 points at half time after 35 where they rarely got out of first gear. Up front Con O’Callaghan, Ciaran Kilkenny and Cormac Costello were solid, with Tom Lahiff and Brian Fenton putting in a huge shift in the middel of the park.

It took Meath 13 minutes and five wide attempts before Bryan Mention registered their first score. Lahiff, Kilkenny, Costello, and Lorcan O’Dell had already put Dublin five clear. O’Callaghan started to cause the Meath Back 6 trouble and clipped a couple of scores over. And he was involved in 2 incidents with Eoin Harkin, costing Meath a free and a penalty with Dean Rock coverting both.

A biright spell midway through saw Meath stitch three scores together but trailing by 1-17 to 0-05 at the break everyone wondered what would transpire on the restart.

Although Meath improved after the break, it was inevitable Dublin would push on, and they were happy to get bodies behind the ball adn play counter attacking football. The most fruitful part of Meath’s attacking game was drawing frees in scoreable positions. And it was really their only armour.

Jack Flynn was sent off after a heavy challange on Jonny Cooper. Matthew Costello was awarded a penalty with Michael Fitzsimons receiving a red card for a second bookable offence. Jordan Morries went from hero to villain in a matter of minutes. He converted Costello’s penalty, but 2 minutes later after a sideline incident with Lee Gannon, he received a straight red card adding to a day Andy McEntee will rather forget.

For Dublin, it’s eyes on May 28th and Kildare in the hope of 12th provincial crown and a place in the ALl Ireland mix again.

Comerford Will Get His Chance But Maybe Not This Sunday