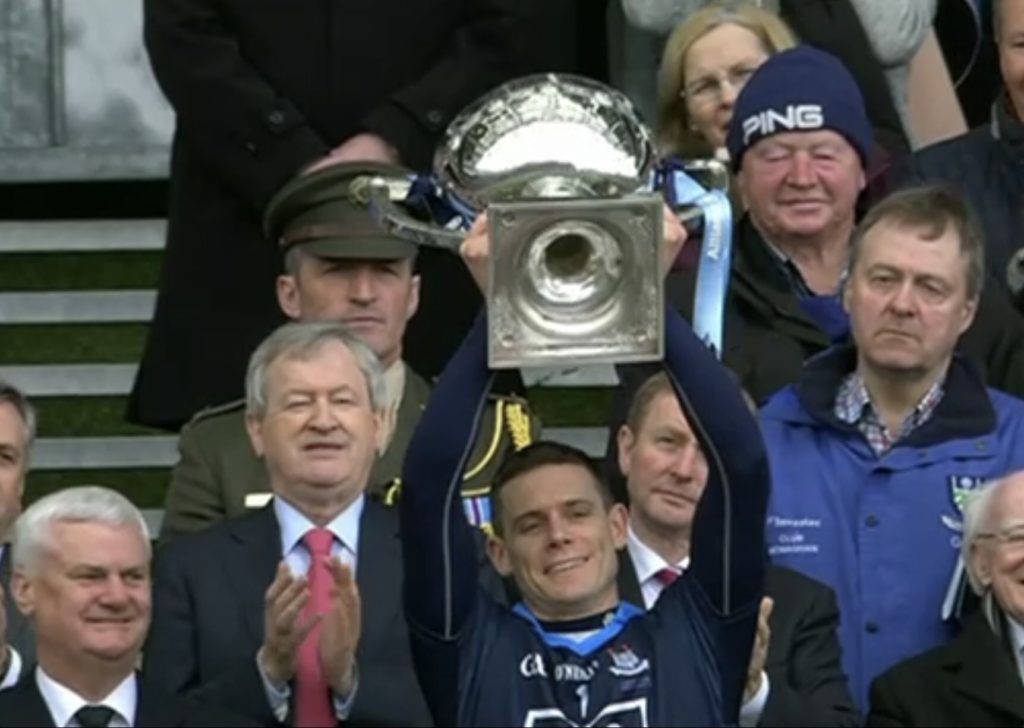 Dublin the defending league champions, begin their quest for five Allianz league titles in a row next Sunday afternoon with an away trip to Kingspan Breffni Park to take on newly promoted Cavan.

Dublin will head into the game with the O’Byrne Cup, the first piece of silverware that was up for grabs in 2017 already safely on display in the trophy cabinet.

That was achieved even though Jim Gavin and his established senior players were not involved as they enjoyed a well deserved break in Jamaica.

Instead Gavin picked a squad of young hopefuls to compete in the competition under the watchful eye of Paul Clarke, Jim Brogan and Bryan Cullen. The brief was simple get as many games as possible and identify players to add to the squad for the National League campaign.

It was a clear indication that Gavin was looking to freshen things up, keep everyone on their toes, raise competition in squad and strengthen his options for another assault on the League and beyond.

This could be an historic year for Dublin, there will be plenty talk throughout the season about winning three All Ireland titles in a row or being the first side to win seven Leinster titles in a row.

But if Dublin win their fifth National Football League title in a row this year they will be only the second side to ever accomplish that, something that hasn’t been done since the 1930’s.

Although it would still leave Gavin’s men one title shy of the great Mayo team of the 30’s who won six league titles in a row from 1933 to 1939.

The first step in journey in the drive for five will be a short trip north to take on Cavan in their own backyard. This early in the season it’s difficult to make any predictions as to how Sunday’s game will pan out.

Cavan should be a few weeks ahead of Dublin in terms of fitness levels as they would have returned to training earlier than the Dubs, which might be a telling factor in the latter part of the game.

Cavan will know themselves that it’s a difficult task for promoted sides to avoid relegation in the same season that they come into division one.

They will have targeted to win their home ties to give them any chance of survival in the division and would have earmarked Sunday’s game as a must win.

They will also have the Juicy carrot of being the first side to end Dublin’s 29 game unbeaten record in league and championship.

The last time Jim Gavin’s men tasted defeat was back in March 2015 when Kerry came out on top 0-15 to 1-10 in a very heated affair played in Fitzgerald Stadium in Killarney.

So the need for points and the chance to be the first team to bring the Dubs down a peg or two will see a fired up Cavan side take to the field at the weekend.

But Jim Gavin’s men have been here before, it’s the same every time they play, they have learned to win even when not at the top of their game and their experience and ability to grind out a win in tight situations, should stand them well, not just on Sunday, but throughout the rest of the League campaign and beyond into the championship.

With the semi-finals now scrapped, only the top two teams will get to battle it out for the League title which should make what is already a competitive competition even more so.

A loss for Dublin at the weekend will immediately put their title defence under pressure, particularly with away trips to Kerry and Donegal and home games against Tyrone and Mayo to come in their next four fixtures.

So let the games begin as Dublin once again start what will hopefully be a long successful 2017 journey and the Drive For Five is free of bumpy roads and damaging potholes.

Southside Teams Travel Across The River For Football Semi Finals

VIDEO: AIG NEVER HAVE I EVER