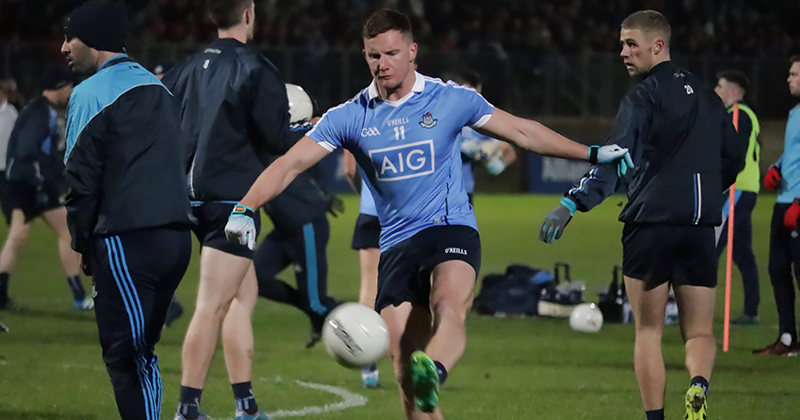 35,213 watched on in Croke Park as Dublin resumed normal service with convincing win over rivals Mayo

Cormac Costello, not for the first time this year, put in a fantastic all round performance. The Whitehall man added another 1-04 to his ever growing personal tally as Dublin ran riot over their western rivals right from the throw in. And what’s more important is Dublin are back in the race for a League Final position, with games against Roscommon, Tyrone and Cavan remaining.

The Dublin manager called up the experienced Cian O’Sullivan and Ciaran Kilkenny as last minute replacements for James McCarthy and Dean Rock before throw. And giving them their first taste of inter county action this year paid off, particularly for O’Sullivan who was solid for the entire 70 plus minutes.

Mayo had nothing, which was highlighted by goalkeeper Rob Hennelly being their joint top scorer tonight with 0-02 from placed balls. But to his credit, the scoreline could have read a lot worse at full time had it not been for no less than five heroic saves from Dublin goal chances.

Dublin were 0-02 up after 10 minutes of play, all the while gauging their opponents strategies, like a pack of hunting wild dogs studying their prey. With the game tied two a piece in the 19th Cormac Costello left Keith Higgins for dust, darting forward and placing the ball cleanly past Hennelly at the near post for Dublin’s goal. And from here it was routine. Paul Mannion, Kilkenny, Costello and Jack McCaffrey all added scores to give Dublin a more than commanding 1-06 to 0-03 lead heading in at half time.

Mayo youngster Fionn McDonagh got their only score from play of the half, with Hennelly converting 0-02 from placed balls. And it didn’t help losing Lee Keegan for ten minutes on a black car, reducing them to 14.

If anything the opening half left the second session as a dead rubber affair, with Mayo needing goals.But from where? Matthew Ruane shortened the gap by 0-01 after the restart, but with Mayo only scoring another 0-03 for the rest of the game was never going to be enough. And while Dublin still weren’t at their free flowing best, but Costello, Con O’Callaghan, Brian Fenton and substitute Dean Rock added more than enough to clinch the win that keeps them in the race for a final place.

The second-half stretched to 77 minutes due to a crazy incident when an umpire was accidentally floored by Mayo’s Colm Boyle, and requiring treatment. And Seamus O’Shea was also sin binned, topping a forgettable night for James Horan’s return to GAA Headquarters

“They’re relentless from the very first whistle & they never let up” @DubGAAOfficial manager Jim Gavin spoke to @SDawsonSport after his side returned to winning ways at Croke Park. #AllianzLeagues pic.twitter.com/0deU5nIe4A