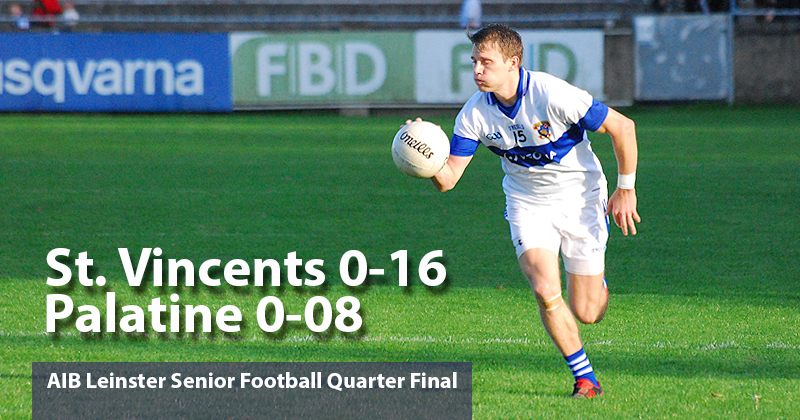 The 2014 All Ireland Champions were expected to get the win easy today but made hard work for themselves.

Captain Diarmuid Connolly was shown the line with a back card following a grapple with Palatine’s Shane O’Neill, but thankfully Vincents didn’t suffer the loss too much.

Cormac Diamond took the opportunity to stake a claim and invaluably scored five points and assisted with at least another three.

Up by four after five minutes, Vincents were cruising with Diamond (2), Enda Varley and Shane Carthy all finding the mark. But that was the end of their scoring for over a 20 minute period.

Palatine used that time to muster points from O’Neill and Jamie Kenny to close the gap and stay in the game.

In the 19th an umpire brought referee Niall Ward’s attention to an incident between Diarmuid Connolly and O’Neill. The two men had clashed in two seperate incidents and Connolly appeared to be sanctioned for the first one, receiving a black card for his troubles.

Diamond’s third score brought Vincents tally to 0-05, and O’Neill scored again for Palatine to bring them back to within two scores at the break.

Both sides shared four in the first third of the second session but it was the next five scores on the bounce in an eight minute spell that moved the Marino men out of Palatine’s reach, with Mossy Quinn claiming three of the points. Vincents used all their allocated subs to great effect droughting Palatines’ attack.

Vincents in the end were too much for Palatine and now advance to the Semi Finals in Pearse Park, Longford and face St Columba’s, Mullinalaghta on November 27th.