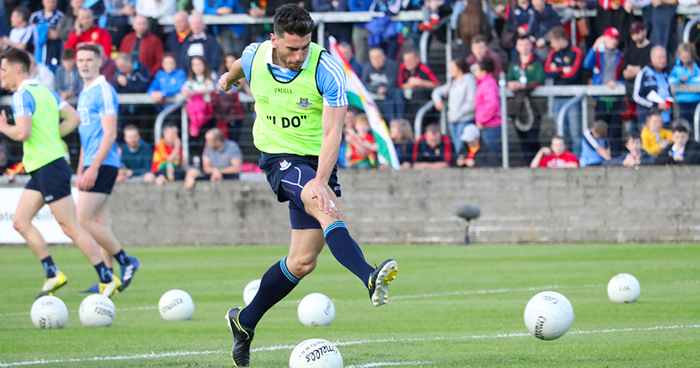 Following a training ground cruciate injury back in February, St. Oliver Plunkett Eoghan Ruadh and Dublin forward Bernard Brogan has not much competitive action with his beloved Dublin team mates this year.

No one really knew in the public domain the extent of Brogan’s injury and speculation mounted that the occurrence may spell the end of his inter county career.

The good news is Bernard is now over the surgery three and half months and has responded well to treatment and rehabilitation, so much so that the multi All Ireland winner is trying to put a positive timeframe on his return.

Most expected not to see Bernard in the blue jersey this year, a prospect that would concern even the neutrals among us, but the 34 year old is pointing to August and a return before the end of the 2018 Championship, should Dublin be still involved.

“My main aim is to get back on the side of the pitch with the lads and start doing a bit of running there.” he told RTE Sport.

“The good news is I’m on the recovery. Three and a half months in, I’m back doing a lot of weights, back in the gym.”

Brogan has been a permanent fixture with the Dublin Senior Football set up since winning the first of his eleven Leinster Senior medals in 2006, and has accumulated five league and five All Ireland wins, along with four All Stars and numerous Player Of The Year Awards during the 2010 season.

And despite playing more a bit part than a leading role in recent times, Bernard lives and breaths Dublin football and its obvious he can’t wait to get back.

“I’m actually moving through the gears faster than I thought I’d be, which is good.”

“I haven’t given up hope on a return this summer in August. I very much haven’t ruled it out yet.

And with the new structure to this year’s All Ireland Championship, should Dublin reverse the Leinster landscape, they’ll have to play a few extra games before the business end.

“My aim is to try and get back for August, for in and around the Super 8s, or the end of the Super 8s. That’s my target, that’s the carrot that I have in front of me.”

Dublin’s next opponents in Leinster will be Longford on June 10th, far too soon for the Dublin star’s contribution but nonetheless Bernard knows despite the odds, the Dublin team will not take any game lightly as every county will attempt to close the gap between themselves and the reigning All Ireland Champions.

“They’ll take Longford with full respect and they’ll do their homework as if it’s the All-Ireland final. That’s the way it’s worked before. Dublin will continue to use their processes that have worked over the last number of years.”

“I think Longford have shown some good stuff over the year.”

DUBSTV – ON THE SPOT WITH EOGHAN O’GARA

IT WAS A BOOKING. WAS IT A BLACK CARD? – BRENNAN