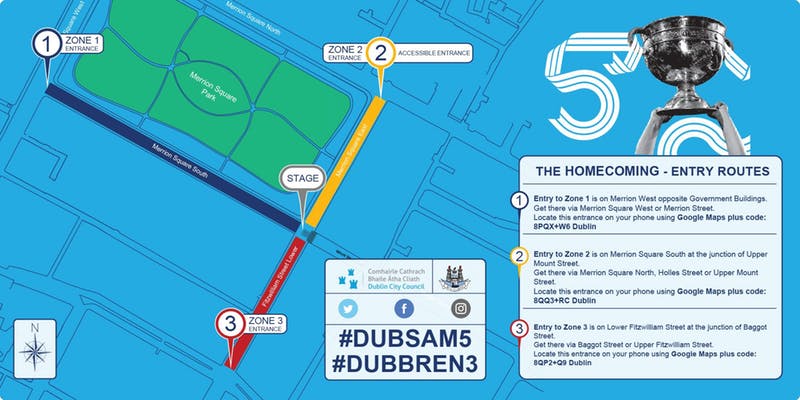 Dublin City Council will host the event to celebrate the victories of both sides. The Dublin Senior Footballers made history last Saturday, capturing a record fifth All Ireland title. And on Sunday, adding to the celebrations, Dublin’s Senior Ladies lifted the Brendan Martin Cup for the third consecutive year to win another TG4 Senior Championship.

With the city still in awe of both achievements, Lord Mayor Paul McAuliffe is inviting all fans of both teams to unite for a Championship Homecoming to honour the men and ladies who have inspired a generation. The Homecoming will take place between 1:30pm and 4:30pm on Sunday, September 29th in Merrion Square.

Irish acts Keywest, and Eoin Thomas & The Rising Sons will provide the entertainment on the day. And they’ll be followed by interviews of former Dublin stars, hosted by RTE’s Marty Morrissey. A specially commissioned video of Dublin’s All Ireland wins from 1891 to 2018 will be shown for the first time, along with highlights from both the men’s and ladies recent All Ireland wins.

The afternoon will end with the presentation of both the All Conquering Championship management and teams to the crowd in Merrion Square.

This is free event being run by Dublin City Council.

Access to the event on Merrion Square will be via 3 Zones.

Details for the event can be found on eventbrite.ie