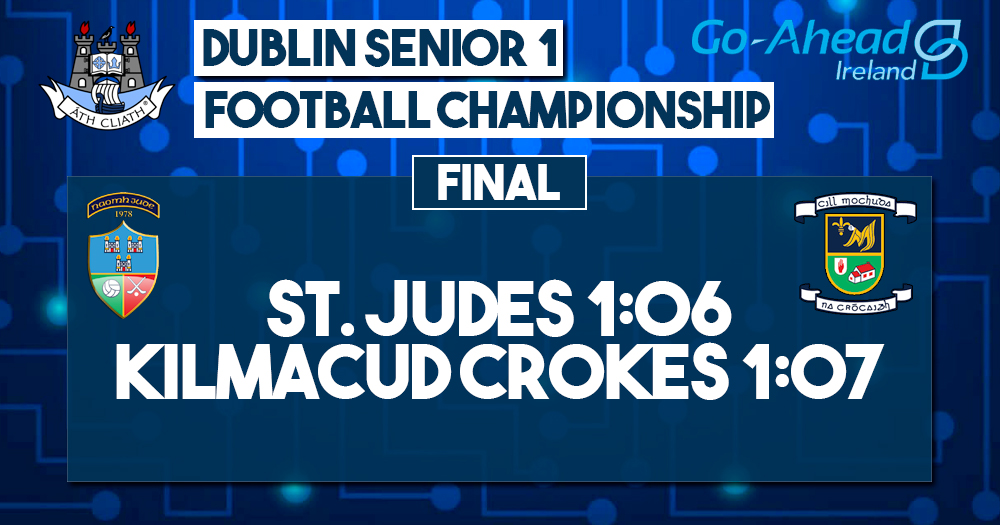 It took a very late score from substitute Callum Pearson in the dying seconds, but it was just enough to secure the Senior 1 Football title giving Kilmacud Crokes the hurling and football championship double in the county. What a couple of weeks for the Stillorgan side and the perfect end to the season.

St. Judes will be disappointed and still in search of the elusive first Senior 1 Football Championship. With a 1-4 to 0-2 lead after 42 minutes and, happy to play a counter attacking game, Judes appeared to be well set up to register a landmark win. But sadly the Tymon North men just couldn’t capitalise when it really counted.

Crokes, who only registered a solitary point in the opening half, finished the stronger side. And in a repeat of the 2018 final they once again sent Judes home empty handed.

Pearson will be the player remembered for securing the win, when he sent the ball over from an extremely narrow angle in the fifth minute of additional time to steal the win.

Trailing for the majority of the game, a 52nd minute goal from substitute Cian O’Connor was the tonic Crokes needed to spring into action. Paul Mannion registered 0-04 at vital times of the fixture.

Judes will look back in disappointment for letting this game slip away having led 1-01 to 0-01 at half-time thanks to Alan Connolly’s 23rd-minute goal.

They won the third quarter by a point and were 1-04 to 0-03 up at the second water break. But they couldn’t hold on as Crokes rallied superbly.

THERE WILL BE NO TALK OF ALL IRELAND TREBLE SAYS CIAN...