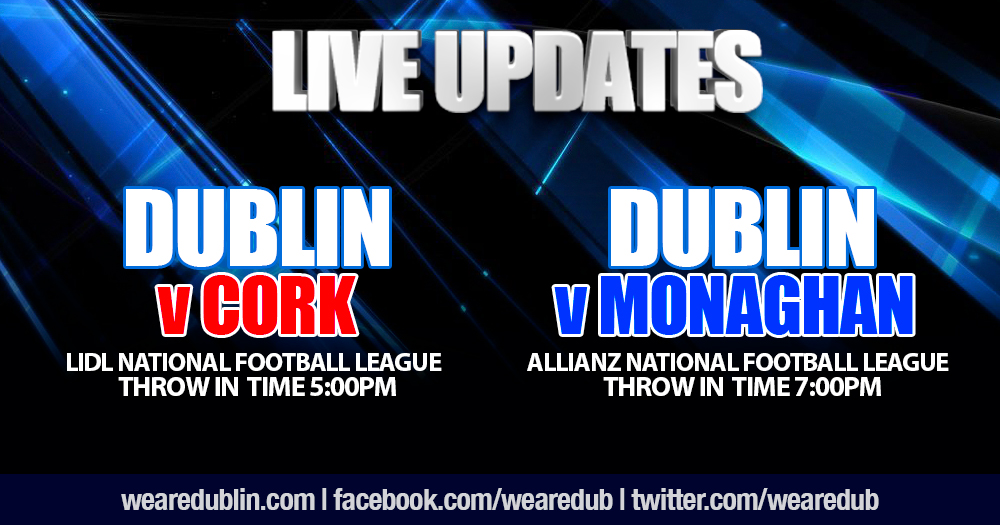 It’s the All Ireland Champions against the League Champions in tonight’s curtain raiser in Croke Park as Dublin will take on rivals Cork. And we’ll have Live Updates from the off. This one is expected to bring all the levels of intensity we’ve come to expect when the Leinster and Munster giants meet.

Dublin were victors back in the All Ireland Semi Final in 2019. But Cork had the measure of Dublin in a gripping League Semi Final in Nowlan Park earlier in the year.

Cork go into tonight’s game with two wins from two, while Dublin look to pick up points, drawing to Tipperary in Round 1 and beating Mayo last weekend.

It’s a renewal of acquaintances, and a potential marker for one of these sides for the year ahead.

Then our attention turns to the men’s National Football League and an interesting matchup between Dublin and Monaghan. Monaghan are one of few teams to deal Dublin a blow in two consecutive League campaigns. And following a convincing win over Tyrone in Castleblayney last week, they’ll come to Croke Park tonight with confidence.

Dessie Farrell’s side are beginning to gel, with a commanding second half performance against Mayo in Castlebar last weekend. Dean Rock added to his goal tally with a fisted ball into the net from a Kevin McManamon pass along the end line. And it seemed to be the catalyst for Dublin after a very evenly matched first half.

After their opening defeat to Galway, Monaghan need points if they’re to stay in touch with the top three of Donegal, Dublin and Kerry. But they may be hitting Dublin as the wheels of the blue engine are starting to calibrate.

We’ll be live from the first throw in at 5:00pm in Croke Park, with score by score updates for both games on www.twitter.com/wearedub. And you can find all the post match reports and analysis from the game right here and on www.facebook.com/wearedub.

BIG DAY HAS ARRIVED FOR DUBLIN’S U21 FOOTBALLERS