Two crucial games throwing in this afternoon in Croke Park, and we’ll have Live Updates throughout the day 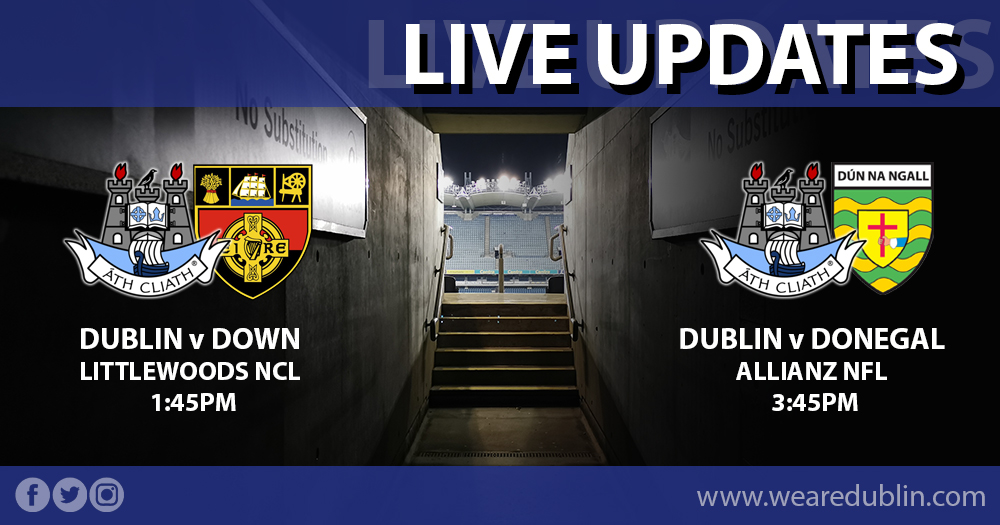 There really is nothing like a double header of entertainment to end the weekend. And today we’ve got two massive games taking centre stage at GAA Headquarters in Croke Park. Dublin’s Senior Camogie panel and Senior Football Panel will take on Ulster opponents in their respective league campaigns, both looking to pick up crucial wins.

At 1:45pm Adrian O’Sullivan’s Senior Camogie Panel will be hoping the crowds arrive early to cheer them on as they fight Down. Both sides are have recorded a win over Offaly, but have also been beaten by Galway and Tipperary. Today they’ll attempt to avoid joining Offaly at the bottom of the Group 1 table.

The Dublin boss has gone with an unchanged side to the team that started against Tipperary in the last round, and for the most part Dublin performed really well that day despite losing the tie.

After A comprehensive win over Tyrone in Omagh last weekend, Dessie Farrell will look to build on that momentum this afternoon as they welcome Donegal to Croke Park. With two games remaining in the Division 1 league competition.

Things have not been good for the Dublin Senior footballers since being knocked out of the All Ireland Championship by Mayo last year. Despite a positive O’Byrne Cup competition, Armagh, Kerry, Kildare and Mayo all lined up and took out the League Champions. And ahead of their trip to Omagh last weekend, the mood in the capital was not one of optimism.

Thankfully the fighting spirit and game intelligence Dublin has become known for made a welcome return. Today, that ethos needs to be apparent as they fight to avoid relegation to Division 2. A win today will make their trip to Clones in the final round a little less daunting.

We’ll be making the trip to Croke Park later this afternoon, and we’ll keep you posted if you’re not traveling or can’t tune in to the games. Our Twitter Feed will be buzzing with Live Updates from the first throw in at 1:45pm. Just head to www.twitter.com/wearedub to follow the action. Not on Twitter? Don’t worry, you can follow the feed below this post.