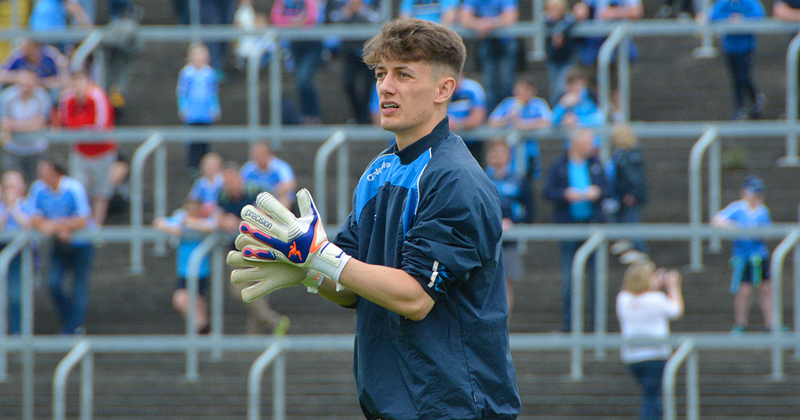 A trademark solid second half performance on Sunday saw Jim Gavin’s senior panel retain the Delaney Cup for the eight consecutive season. And now the Dubs preparing to face Donegal in their opening All Ireland Football Championship fixture in just over two weeks time.

The Dubs starting fifteen for the Leinster Championship campaign had remained relatively unchanged. The only adjustments forced by injuries. And on Sunday one change that had everyone talking was the championship debut start for Dublin’s number 2 keeper Evan Comerford.

Although Gavin had fully expected his captain and number 1 Stephen Cluxton to make a full recovery from the rib injury he sustained during their Leinster Semi Final win over Longford, it turned out to be the first time in 14 years that Cluxton would miss a championship game.

Obviously the Ballymun first choice Comerford had experienced O’Byrne Cup starts and deputised in part of Dublin‘s Allianz League Campaign earlier this year, but never in championship, and never in front of a crowd of over 41,000 in Croke Park.

But despite the pressure of the last minute call up, the young Dublin star soaked up all the atmosphere and put in a very impressive championship debut.

Of Comerford’s 23 kickouts, Dublin retained 19 of them, with a short pass to Jonny Cooper resulting in a throw ball by the referee and a poor ball to Michael Fitzsimons intercepted by Laois’ Donie Kingston being the only blips on his first full day.

“He played really well, and it’s something we’re not surprised at as he’s playing so well in our games in training, so hats off to him”.

Dublin fans watched with bated breath as Laois sent the first of many high balls into Comerford’s range early in the game, but as soon as his fist rose to clear the danger successfully, their nerves, and his nerves, dissipated completely.

“It should be that way, as Evan is playing with these guys in training, so they’ve all got a bit of experience of both keepers. So we mix it up and it showed out there.”

Cluxton will be ready

As much as Comerford did a tremendous shift for the senior Footballers on Sunday, it is expected that his captain and team mate will be fully fit to return to his post for Dublin’s All Ireland opener.

Cluxton had declared himself during last weeks preparations, which was why his name was featured in the match programme as the management team were willing to give him every opportunity to make the Final, but at the end of the day, it’s the long game that needed to be played and the medical team decided it was best if Comerford stepped in.

“Ultimately it comes down to the management team to make that call, what’s best for the player and for the team.” he admitted.

Away from Evan’s performance, Dublin scored 1-09 in the first half of Sunday’s game, but were quite wasteful with their chances, shooting nine wides over the 35 minutes, but that was still no cause for concern for the Dublin manager.

“Obviously in the first half, Laois played really well, and our boys created a lot of scoring chances that we just didn’t convert.”

“We continued that in the second half but the contrast was we were quite clinical.”

“It was really positive how we executed our scores from play, we had nine different scorers, and there were good contributions from players coming back into play.”