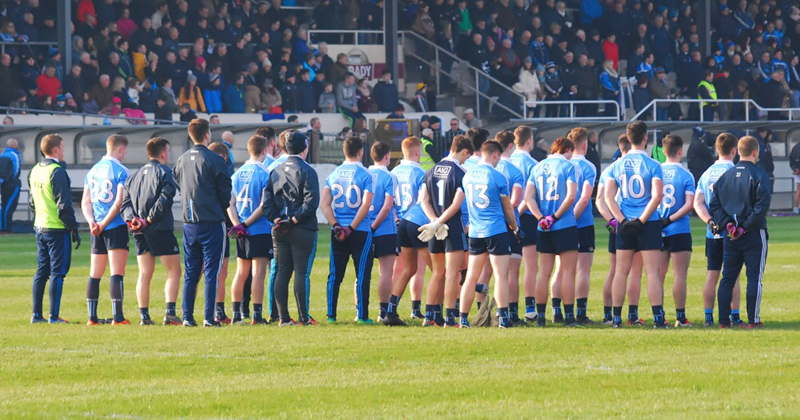 For a lot of people the Bord Na Mona Leinster Pre-Season competitions don’t carry too much weight in terms of the entire calendar year. It’s seen by most as an opportunity to remove some of the ring rust and try new approaches before the big competitions commence.

But every now and again, these competitions can spur a different challenge and this year in particular, Dublin’s approach has been both intriguing and also proved successful so far.

A large bunch of non regulars have been assembled in the interim, as Dublin’s All Ireland winning panel have been given a well earned break. Many would have expected this young panel to go through the motions and fill the void, but that wouldn’t have been good enough.

The O’Byrne Cup has in fact been a launch pad for many Dublin stars throughout the years and this year might be no different. You only need to look at some of the performances put in by the likes of Paul Hudson, Niall Scully, Maitias Mac Donncha and Niall Walsh to see the calibre of talent that is fast approaching the Dublin senior panel.

In 1999, former Dublin and Ballyboden star Colly Moran got his first ever start in this competition when he lined out against Carlow. Dublin went on that year to beat Louth in the final, the last time these two teams have met in the final stage of this competition. Unfortunately for Moran he didn’t make that final because of underage commitments.

“I would have loved to be in the final. When you’re young like that you’re trying to make the breakthrough. It’s a great opportunity.” Colly told the Independent

This start gave Moran the platform to showcase what he eventually brought to Dublin’s senior team. He went onto captain the team, won Leinster honours in 2006 and 2007. He participated in inter-provincial competitions with Leinster and represented Ireland the International Rules Series. But Moran never took his starting position for granted, particularly in pre season.

“Even when you’re an established player, the way I always looked on it, you’d be looking behind you at the new players coming up in the O’Byrne Cup.”

“They’d be hoping to take your position so you’d always want to do well. It was always a competition I enjoyed playing in.”

Looking back at the last two decades, Dublin only won this competition on a few occasions. They beat Louth in ’99, Laois in ’07, Longford in ’08, and Kildare in 2015. And interestingly in the same time frame they’ve only lost in one final appearance against Kildare in 2013.

But this year is quite different for the simple reason that Dublin have not named or fielded any of their regular panel. And they’ve been given the “third string” tag which some believe is less than flattering considering how well they’ve performed leading to tomorrow’s final.

“Some will never play League or Championship but if they’ve the opportunity of winning an O’Byrne Cup title with Dublin, it’s a day they’ll treasure forever.” Moran admitted

“What has happened this January is an incredible opportunity for those guys.”

In the height of Moran’s time with Dublin, the O’Byrne Cup was the spotlight for a few of Dublin’s veterans now. Bernard Brogan, Ger Brennan, Diarmuid Connolly and Philly McMahon all won winners medals around ’07 and ’08. And Colly believes that Dublin’s current interim manager would have highlighted this to these fledglings.

“Paul Clarke, who I’ve worked with for a number of years, is a very passionate guy, and I’m sure he would have been selling the opportunity in the dressing-room to those guys, that it was an opportunity to shine and maybe get into the first squad.”

“It was a huge deal for me at the time”.

KERRY LEGEND GALVIN EXPECTED TO SWITCH FROM CROKES TO PLUNKETTS