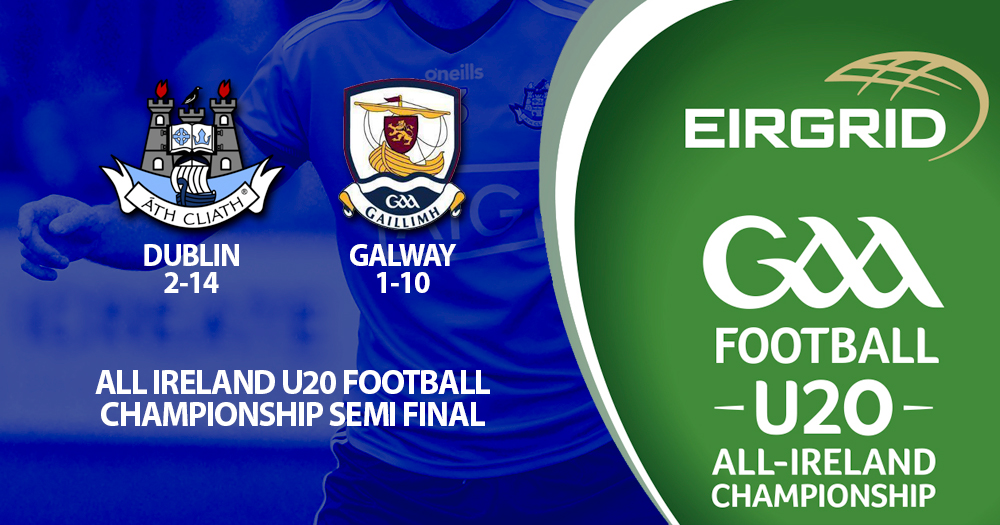 Ciaran Archer and his U20 team mates delivered for Tom Gray this evening against a Galway side who had beaten them only a month ago. And the reward is a place in this year’s All Ireland U20 Football Final.

The St. Maurs sharp shooter was the star of the show again today bagging 2-06. Manager Tom Gray expressed his feelings on upping their game facing the Connacht Champions. Galway had beaten Dublin in the John Kerins Development League in June, but Dublin got the better result today when it counted.

Archers 2-03 in the first half was a massive difference. And while Galway enjoyed the larger share of possession they were down 2-06 to 1-04. They did kick on in the second half but Dublin’s composure was key.

High Fielding the order of the day

The Dubs started out looking to play the high ball into the Galway full back line and they reaped the benefits with Archer bagging two green flags. A free converted in the third minute was followed a minute later Brian O’Leary fielded a high ball from Karl Lynch Bissett, feeding Archer for the goal.

Galway were instantly on the back foot and another ball in was caught by Archer who got past a few Galway defenders and scored beneath the advancing Oran Burke in the Galway goal.

Trailing 2-01 to 0-00 Tony Gill finally opened Galway’s account with Padraig Costello adding a second. But they had to wait until the 17th before they registered their goal. Brian Harlowe exchanged passes with Gill and Darragh before placing the ball into the top right corner.

Matthew Tierney scored a point and Gill tagged on another. But with Archer in the form of his life he was quick to add another score along with one from O’Leary to end the half up by 2-06 to 1-04.

At the restart Costello started a run of five unanswered score for Galway and by the 42nd minute the sides were level. Dublin clawed back a two score advantage thanks to an Archer free and a score from play by substitute David Lacey. Archer was on target again, and Brian O’Leary helped push the lead out before Liam Boyle brought it back to a goal.

Galway seemed to be in despair at the close of the game as Dublin easily picked off scores. Ross McGarry, Niall O’Leary, Archer and James Doran found the range and they cruised to a comfortable win in the end.

Dublin will now face the winners of the the Cork v Tyrone Semi Final which throws in tomorrow at 4:00pm in O’Connor Park.

JIM GAVIN: WE DIDN’T PERFORM TO THE STANDARDS WE SET OURSELVES

PHILLY McMAHON EXPECTING A BIG STEP UP IN CLASS FOR THE...