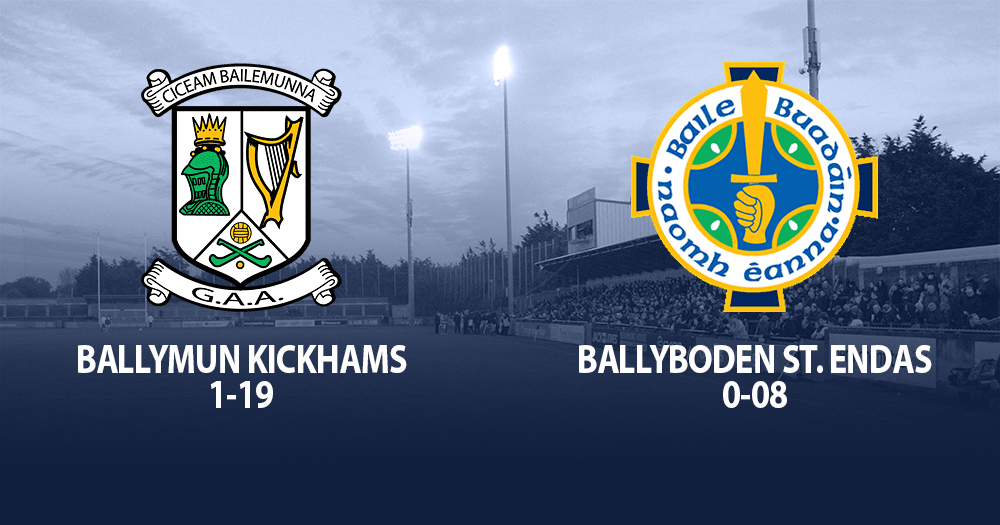 A long eight year wait came to an end this evening as Ballymun Kickhams stormed to their first Dublin Senior Football Championship title since 2012. And there was never any doubt in today’s proceedings. Many will say the Mun’s cause was helped by the postponement of Inter County action gifting them a fully fit quota of elite players, but today ultimately belongs to them and no team are more deserving.

Outgoing Football Champions Ballyboden St. Endas simply had no answer for Ballymun’s power and movement around the playing surface as the Northside unit played the game completely on their terms.

On 11 minutes the sides were level on 0-04 each after Ryan Basquel equalised, but Boden wouldn’t register another score until brother Colm converted a free in the 45th minute. And it was across that 35 minute spell that Ballymun imposed their dominance, making it impossible for Boden to challenge and retain their crown.

Ballymun pressed aggresively throughout, pinning Boden in and finding the gaps which more times than not resulted in scores. Dean Rock was on form scoring 1-08, including a late penalty conversion that really put the gloss on the scoreline. Fiach Andrews, Dillon Keating and Paddy Small all mucked in on the scoreboard along with Jason Whelan and Cathal O’Tighe.

The contest was all but done at the break with Ballymun in a commanding position, leading by 0-10 on a 0-14 to 0-04 scoreline. Adding another 1-05 to only 0-04 from Boden proved how enforcing Ballymun were defensively today, only allowing Boden 0-05 from play. And credit must go to Leon Young in a corner back role, holding Colm Basquel scoreless form play, that alone deserving of a medal.

LEAGUE FINAL TOO SOON FOR THE RETURN OF PAUL FLYNN AFTER...