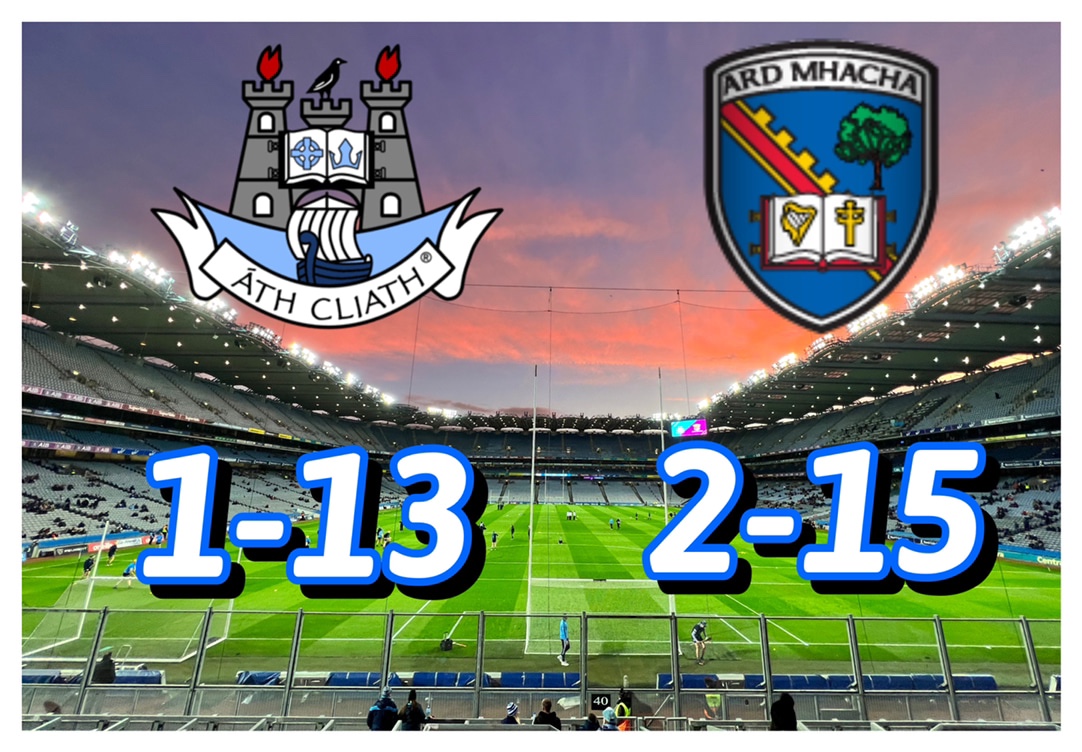 Dublin suffered their second straight Croke Park defeat yesterday evening as they got their Allianz National football league campaign off to the worst possible start with a five point loss to Armagh.

Dessie Farrell’s side were looking to wipe the memory of their poor second half showing against Mayo in last seasons All Ireland semi final in Croke Park and would have in confident mood as newly crowned O’Byrne Cup champions.

In a tense opening first quarter Dublin built up a three point to one lead, but it all fell apart after that for the boys in blue as they put in a error strewn lethargic display.

The two most disappointing aspects of the display was the erratic shooting which seen Dublin hit twelve wides to Armagh’s two and also drop a number of shots short into the keepers hands and secondly and more worryingly was the complete lack of shape in the defensive unit.

One of the main criticisms of Dublin’s displays last season particularly in that semi final defeat to Mayo was the slow buildup play with players consistently passing the ball laterally and backwards and that was once again evident in last nights performance.

Dublin had to work extremely hard to fashion scores as their slow movement of the ball allowed Armagh to set up their defensive shape and limit space, Armagh on the other hand were more direct with the ball moving it at pace which allowed them to pick off scores with more ease.

It took eight minutes for the first score of the contest scored by Dublin’s Brian Howard, three minutes later Cormac Costello doubled the lead with a fine point.

Armagh finally got off the mark in the twelfth minute with a converted free from Rory Grugan. Dublin were forced into their first change in personnel two minutes later with Ross McGarry replacing Aaron Byrne.

Seventeen minutes in and a successful free attempt from Cormac Costello put Dublin two points in front. But Armagh responded with two points in as many minutes from Rian O’Neill and Aidan Nugent to bring the sides level.

The men from the Orchard county took the lead in the game for the first time in the twentieth minute courtesy of a point from Jason Duffy.

Dublin lost all shape in their defence and David Byrne was left exposed marking Rian O’Neill who was causing the Naomh Olaf man difficulties every time the ball was fed into him.

In the twenty second minute Byrne got caught under a high ball towards O’Neill who gathered possession and one on one with the keeper slotted the ball into the bottom right hand corner of the net for the games opening goal.

Cormac Costello struck a point a minute later, Rian O’Neill and Ciaran Kilkenny swapped points as the game went from one end of the pitch to the other. But disaster struck again for the Dubs in the 27th minute when the defence failed to clear the ball and Jason Duffy chipped keeper Evan Comerford for Armagh’s second goal of the half.

Dublin then lost Cormac Costello to injury five minutes before the break and he was replaced by Dean Rock. Armagh tagged on three further points before half time, two from Rory Grugan and the other from Rian O’Neil to put them nine points in front. Dublin failed to add any further scores before the short whistle with Dean Rock dropping two free attempts short into the keepers arms and at the break Armagh led 2-08 to 0-05.

Cameron McCormack was introduced at half-time for the ineffective Emmet Ó Conghaile as Dublin looked to get themselves back into the game.

Dean Rock found his range in the opening minute of the second half with a well struck free. Dublin lorded possession in the early exchanges but their erratic shooting continued to let them down, two poor wides from Fenton and Howard were followed by a decent point from second half substitute Cameron McCormack.

Two converted Dean Rock frees reduced the deficit but Armagh struck back with points from Stefan Campbell and Tiernan Kelly left nine points between the teams with sixteen minutes left in the game.

In the 58th minute Dublin threw themselves a lifeline, a long high ball was dropped in towards the square and after a scramble second half substitute Lorcan O’Dell shot crept over the line for a goal.

That gave the team and the home support a lift, but again Dublin failed to capitalise hitting two poor wides in the space of a minute from Tom Lahiff and Brian Fenton who had an evening to forget in front of the posts.

Dublin outscored Armagh by three points to two in the closing minutes, Sean Bugler with two and Lorcan O’Dell with the Dublin points and Greg McCabe and Niall Grimley with the Armagh scores but it was the men from the north who earned the well deserved win.

For Dessie Farrell and his side it’s back to the drawing board this week before a difficult away trip to Austin Staci Park next week and a meeting with old foes Kerry who drew their opening round game with Kildare this afternoon.

Farrell must ditch the slow lateral passing style of play for a more direct style or Dublin are going to have many more frustrating and disappointing outings this season.

"For us, it's about trying to remain competitive, but also introducing the new blood & giving them the opportunity & experience at this level…"

Dubs TV caught up with Dessie Farrell after our Senior Footballers' opening round League defeat to Armagh#UpTheDubs pic.twitter.com/XW2O9d0o53