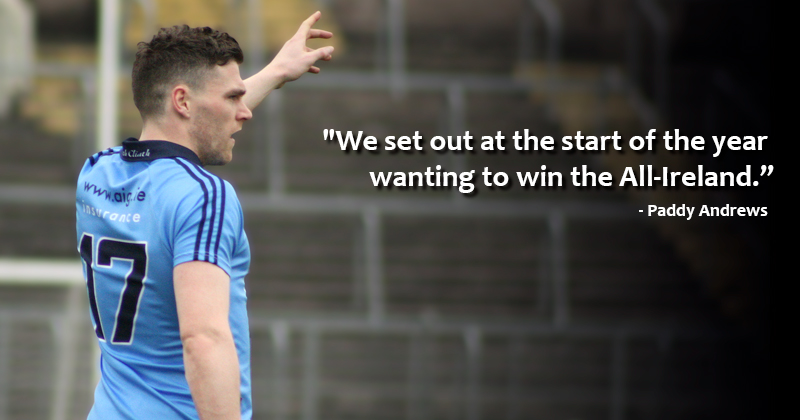 2016 saw some teams come close, knock at the door so to speak, but fortunately for Dublin, none were able to smash that door in.

For a second consecutive year Jim Gavin’s Senior Football panel lifted Sam Maguire, and almost before the last streamer hit the turf in Croke Park on October 1st, talk began about what the next year would hold.

Two in a row didn’t seem to be enough for the all encompassing media, hardly allowing the team and their ever faithful tribe of fans to pop a cork. This hadn’t happened in the capital since the 1977 panel celebrated their second on the bounce.

But when the dust settles, and all the duties and appearances are done, a short break will ensue before Jim Gavin calls his charges into training for the year ahead. And despite what people may think, it will be back to square one, no hangover or fallout from this year’s success.

St. Brigid’s forward, and now veteran of the Dublin Senior panel, Paddy Andrews is already looking forward to the call. He knows it won’t be long now before the boys in blue are back in preparation for the new year.

“I already know for a fact that when we start next year it’s going to be about winning every competition we’re in, every match we’re in.” Andrews told the Herald this week.

After next year’s O’Byrne Cup, the perfect opportunity for boss Gavin to blood and monitor potential additions to his ranks, Dublin will travel to Breffni Park on February 5th to start the defence of their National Football League title against new boys Cavan. And according to Andrews, they haven’t, and won’t take any game lying down.

“Every single game matters. There is no game where it is ‘oh we’ll take this handy, it’s only a league game’.”

“That mentality may have been there years ago with Dublin but its absolutely not the case now.”

It would seem that the Dublin team, and of course management, are the only ones that don’t talk up their success and always manage to keep talk of their achievements on the external. And maybe next year that noise from outside might end up being more deafening than usual depending on how the year is going.

“Genuinely, and even this year, I don’t think we spoke about two-in-a-row once or back-to-back titles.” Paddy admitted.

“We set out at the start of the year wanting to win the All-Ireland.”

“If that ends up with three-in-a-row that’s great, but it’s not something that we’ll be promoting to ourselves when we speak inside.”