We’re filling the void left by the continuing COVID-19 crisis. And there’s no better thing to do than reminisce on the big days in Dublin’s recent history. 2013 was Jim Gavin’s first year in charge of the Dubs. He’d already secured his first National Football League as the new boss. But followed that by bringing the All Ireland Championship back to the capital.

And it was in a sweltering September Sunday that could have been mistaken for mid-July. Mayo again in an All Ireland Football final and falling short at the final hurdle.

In a strange first half, it looked as though Mayo were dominating proceedings. But they were failing to convert their upper hand into scores. Andy Moran got Mayo up and running in the fourth minute. But a bad mistake saw Mayo send a short free out right into the hands of Diarmuid Connolly to tap over Dublin‘s opener.

Three unanswered scores followed for the Connacht Champions, and they seemed to be settling into a rhythm. But when Paul Flynn sent in a Holy Mary it was a 50/50 battle between Bernard Brogan, Ger Cafferky and Rob Hennelly, that Brogan won. The fisted attempt hit the net and things were all square at 1-01 to 0-04.

Hennelly atoned for the goal by pulling off three fantastic saves sparing the westerner’s blushes.

A strange end to a hot contest

Dublin started out of the blocks in the second half and had pushed out to a three point lead by the 50th minute. Andy Moran sidestepped Stephen Cluxton after a pass from Michael Conroy to slot the ball across the line. The teams were level on 1-09 each.

But four minutes later Dublin would register their second green flag. Who else? Only Bernard Brogan again. Dublin created an overlap through Michael Darragh Macauley and Denis Bastick before finding Brogan to palm the ball into the Mayo net.

Mayo clawed back to within two points and at the death were gifted a close range free and the chance to set up a goal to win the game. But strangely Cillian O’Connor chose to convert the free into a point. Referee Joe McQuillan literally blew then final whistle on the resulting kick out by Cluxton and Dublin had brought Sam Maguire back to the capital. 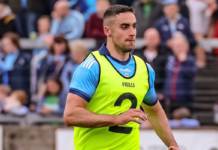 DESPITE REPORTS ANDREWS EXPECTS McCARTHY TO BE FIT FOR QUARTER FINALS