A massive day of action coming your way. And we’ll have live udpates from both Senior Semi Finals in Croke Park 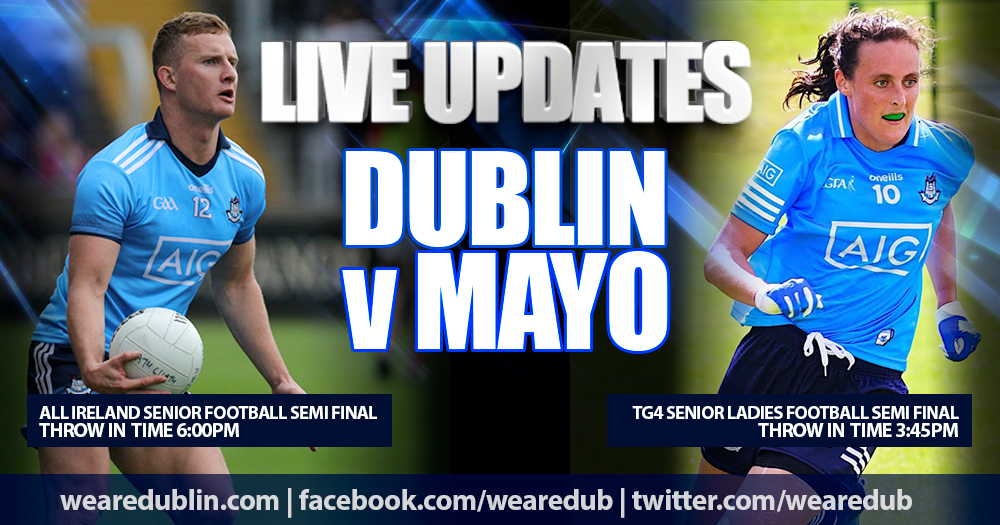 It doesn’t get much bigger when Mayo arrive in town to face Dublin in Championship action. And this afternoon we get two massive helpings as both the Senior Ladies and Senior Men go toe to toe with their Connacht rivals for places in their respective deciders.

At 3:45pm Mick Bohan Senior panel will raise the curtain on a huge day of action in Croke Park. Dublin’s Ladies Footballers navigated their way through a 2-12 to 2-07 victory over a sticky Donegal side in the Quarter Finals to set up today’s clash. For Mayo, their task was a little trickier but finally got past Galway on a 1-15 to 1-11 scoreline at MacHale Park.

Back in 2017 it was Mayo who fell at the hands of the Dubs in the first of their four consecutive All Ireland Championship wins. And it’s now Mayo who stand in their way again as they aim for a record five Championships.

It’s the first time the sides will meet in the Championship since 2018, when Dublin prevailed. And if Dublin’s most recent 4-15 to 0-10 League win is anything to go by, the Mayo Ladies will be determined to erase that memory.

It’s up to the Mayo men to stop Dublin in their tracks this evening, as they remain on track for their seventh consecutive All Ireland title. But as history has shown Mayo never make it easy for the Dubs, and today is expected to be no different.

Mayo still boast being only one of two teams to beat Dublin in the last decade in Championship. And they’ve also held the reiging Football Champions to two draws in that period too. But they’ve never managed to get the job done at the crunch and today is yet another test for this side.

Dublin claimed their eleventh consecutive Leinster title receently, but not at the dominant level that most have come to expect. Today is literally the acid test for Dessie Farrell to assess where his panel are and if they’ll be contesting the All Ireland Final on September 4th.

We’ll be live from the first throw in at Croke Park at 3:45pm this afternoon following all the action, with live updates on www.twitter.com/wearedub. And you can find all the post match reports and analysis from the game right here and on www.facebook.com/wearedub. And don’t forget you can follow us on www.instagram.com/wearedublingaa as well as Facebook and Twitter.

Was The 2013 All Ireland Semi Final The Greatest Game Of...