Late Goals From Scully, Kilkenny And Fenton Seal Win For Gavins Dub’s in 2019 All Ireland Clash

Late Goals From Niall Scully, Ciaran Kilkenny and Brian Fenton eased Dublin to a 13 point win over Cork in front of 30,214 in Croke Park 3 years ago.

It was far from a vintage performance from Jim Gavin’s side particularly around the middle third with Cork certainly shading the duels in that area.

With ten minutes to go Cork were just three points in arrears, but Dublin as they had threatened all game cut loose with three late goals to put distance between themselves and the men from Leeside.

Cork started brightly and led 0-04 to no score after six minutes of play with points from Kevin O’Driscoll, Sean White, Paul Kerrigan and Ruairi Deane.

A minute later and Jack McCaffrey cut through the Cork defence, he looked to have been fouled in the square but he got back to his feet, swiveled and hit a low shot to the bottom corner of the net.

Luke Connolly and Con O’Callaghan swapped, Kerrigan grabbed another for Cork and then in the 28th minute a sweeping move involving Cian O’Sullivan, David Byrne and Michael Darragh Macauley was finished for a point by Ciaran Kilkenny.

Stephen Cluxton was forced into a save a minute later as Cork for the first time got in behind the Dublin backline, Dublin’s response was swift as they broke up the Hill 16 end and Con O’Callaghan swung over a delightful point.

Then came one of the moves of the game, Dublin were awarded a free kick around midfield, the ball was kicked long towards the Cork square, Con O’Callaghan rose to win the ball, slipped it to Cormac Costello who in turn fisted the ball across the face of the Cork goal and Michael Darragh Macauley was on hand to palm the ball to the net to give Dublin a six point lead at the break with the score 2-09 to 0-09.

Second Half Drive The Charm For Ruhtless Dubs

Cork were awarded a penalty in the 46th minute for a foul on Ian Maguire, it looked a harsh call, but Luke Connolly gladly took the gift and dispatched it to the net.

Although Cork were giving a good account of themselves Dublin cut them open numerous times and it was only a matter of time before Jim Gavin’s men found the back of the net again.

That duly arrived in the 63rd minute, a good move involving Ciaran Kilkenny finished up in the hands of Niall Scully who made no mistake and rippled the net at the Davin Stand end.

A poor short kick-out by Cork goalkeeper Mark White in the 66th minute was intercepted and Ciaran Kilkenny ruthlessly punished the mistake with a well taken goal.

Goal number five came just a minute later, Jack McCaffrey picked up the ball on the left wing inside his own half and hit an excellent pinpoint pass to Brian Fenton and the big Raheny man took off towards goal and with only the keeper to beat buried the ball high into the net and it was game, set and match.

Jim Gavin will be pleased with the scoring return from his team particularly their ruthlessness at the end of the game and the three late goals and they left another five or six goals behind them as well. And he will also be happy that he was able to give game time to the returned from injury quartet of Jonny Cooper, James McCarthy, Eoin Murchan and Paddy Small. 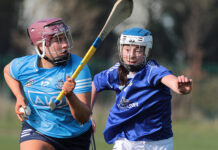 Kevin McManamon Takes Dad’s Advice To Keep Rolling With It

This Year’s Championship Is Personal For Bernard Brogan

One Change For U20 Footballers Leinster Semi Final Duel

Whelan In The Years – Brian Fenton