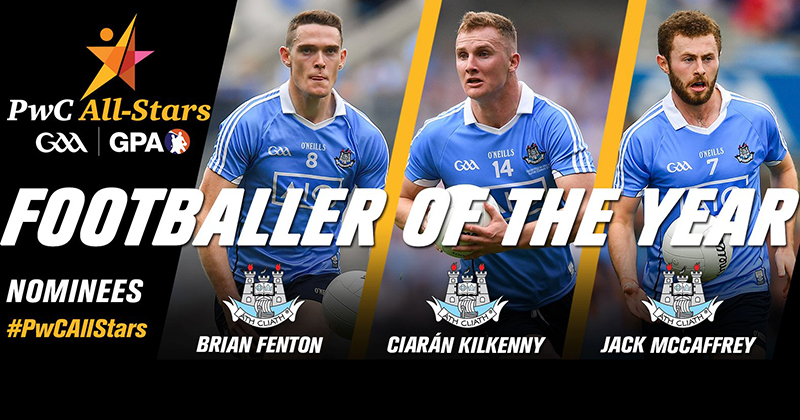 It’s an All Blue shortlist as three Dublin players will square off for this years Player Of The Year Award.

With a National League, an eight consecutive Leinster and fourth All Ireland title on the bounce, if nothing else happens, it’s safe to say that Dublin are indeed the team of the decade. And with the shortlist of nominations announced for the PwC GAA GPA All Stars announced, its no surprise that the 2018 Football Player Of The Year nominees are all from the capital.

For many people there could be no argument that the three names shortlisted are by far the best talent in the 2018 GAA season. And it’s comforting to know that on November 2nd this year’s Player Of The Year will be a Dublin player.

Midfielder Brian Fenton, Half Forward Ciaran Kilkenny and Wing Back Jack McCaffrey have all made the cut ahead of the other 42 players named in the All Star shortlist.

Fenton’s story continues to dazzle in the headlines. Since his debut season Brian has played 27 Championship games unbeaten. He already has two All Star awards. Fenton was named player the match in the 2015 All Ireland Final. And he was shortlisted for Player Of The Year in 2016. Sadly, he lost out to Mayo’s Lee Keegan. To be back here again in such a short space of times shows just how good the Dublin midfield general has become. Did we mention he’s only 25.

Castleknock’s Ciaran Kilkenny hasn’t looked back since returning from a cruciate ligament injury back in 2014. Six Leinster titles, five League and Five All Irelands. Ciaran is looking to add a third All Star to the two he already has. Jim Gavin has found a mature head on a young body in Kilkenny. No play or attack happens in Dublin’s game plan without his influence. It takes quite a lot to isolate the attacker, which has the desired knock on affect the Dubs advancing forward.

What can we say that hasn’t already been said about Clontarf’s Jack McCaffrey? His return from cruciate surgery has been nothing but phenomenal. No one would have believed Jack could’ve improved on his already amazing power and pace from the half back line. But he continues to leave markers in his slipstream on any given opportunity. McCaffrey picked up his fourth All Ireland, a sweet moment after being carried off the field twelve months ago only minutes after throw in. He was named as the All Ireland Final’s Player Of The Match by the RTE panel. But he’ll be looking add another All Star to his trophy cabinet. And having won Player Of The Year in 1995, how sweet would it be to see him win it again.