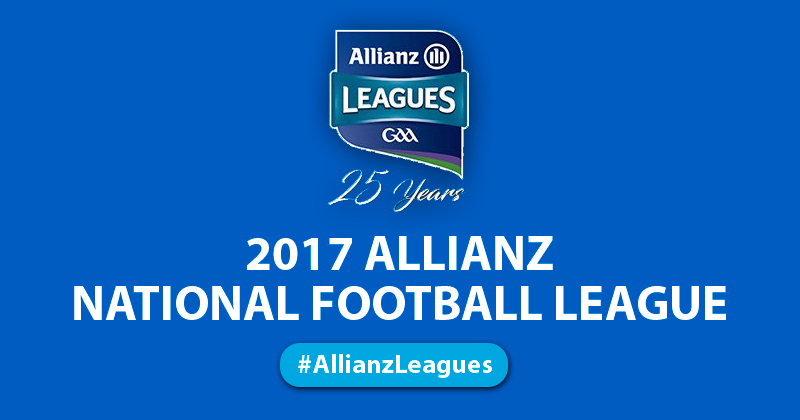 “We know Spring is in the air when the Allianz Leagues are back” were the words uttered by Uachtaráin Cumann Lúthchleas Gael, Aogán Ó Fearghail at this afternoons official launch of the 2017 National Football League Campaigns. And this year Allianz celebrate 25 years of sponsorship with the GAA’s competitions

Also in attendance at Croke Park today were Dublin’s Jonny Cooper and Kerry’s Donnchadh Walsh for a Q&A.

The weekend after next, the Allianz Football League will make it’s start, and the Hurling League will follow suit the following week. But today the focus was on the Football competition.

This year’s Leagues will run from the weekend of February 4th, with Mayo and Monaghan kicking Division 1 off on the Saturday, and Dublin travelling to division newcomers Cavan on the first Sunday. The competitions will run right through to finals weekend on April 8th and 9th after 116 games will have been contested.

There will be a slight change to the Division 1 format as this year there will be no Semi Final stage. The top two teams in the division at the end of the round stages will advance immediately to contest the final. This is a return to the format used between 2008 and 2011, before the Semi Final was reintroduced in 2012.

Division 1 Champions Dublin return in search of their fifth title in a row, having won the last four consecutively, which matched the record of Kerry who win four consecutively between 1971 and 1974. Before Dublin’s recent success, Cork had held the torch for three years between 2010 and 2012. Meaning there have only been two teams to win the last seven titles.

Newly promoted Cavan are joined in Division 1 by provincial neighbours Donegal, Monaghan and Tyrone. Connacht are represented of course by Mayo and Roscommon. And Dublin and Kerry fly the flag for Leinster and Munster respectively.

In Division two Ulster are again heavily represented as Down, Derry and Fermanagh fly the flag. Meath and Kildare feature as the Leinster contingent. Munster have also two in the mix in Cork and Clare, and Galway finish the line up for Connacht.

Leinster are heavily represented in Division 3 by Laois, Louth, Longford and Offaly. Antrim and Armagh are the Ulster sides contending here, with Sligo and Tipperary will carry the torch for Connacht and Munster.

Carlow, Wexford, Westmeath and Wicklow will fly the Leinster flag in Division 4 along with two from Munster; Limerick and Waterford, plus Leitrim and London fill the Connacht berths.

This first round full fixture list is as follows: